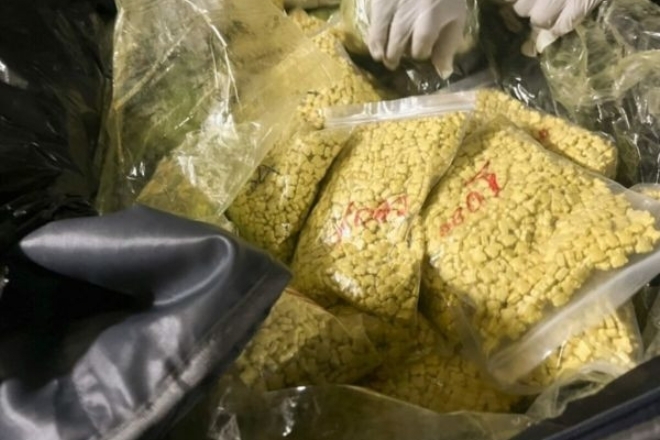 While patrolling the That Phanom district on Saturday, July 16, 2022, a combined squad of soldiers, police and members of the navy came across two black suitcases left on the Mekong river bank. When opened, they found 19 transparent plastic bags filled with over 18,800 ecstasy pills in the shape of Winnie the Pooh, among other substances.

The haul, which is estimated to value around THB 20 million, also includes an additional 54,939 sleeping pills accompanying the Winnie the Pooh ones.

Read this next: Pill life: new photobook is celebrating the unsung beauty of MDMA

It’s been suspected that the haul, totalling over 73,746 pills, was brought over from Europe to Laos before making its way to neighbouring Thailand. Left inside in a floating long-tail boat at Ban Kham Phak Phraew village, the boat operator probably thought “oh bother!” after realising what he’d been transporting and fled the scene.

With Thailand becoming an increasingly popular tourist destination for festival goers and those dabbling in drug use, it’s no wonder the demand for such pills is on the rise. Entertainment venues across the country sell them for about THB 800 – 1,000 a pop, and with

According to Niyom Termsrisook, Deputy Secretary of the Office of the Narcotics Control Board, such drugs are usually produced in Europe before making their way to Thailand smuggled through Laos, Cambodia and Vietnam.

Though Thailand has loosened its laws on cannabis use in the country, you can face imprisonment for up to three years and/or a fine of up to THB 60,000 if tested positive for a Category I or II drug, which includes Yaba, cocaine, Ice or ecstasy.

We all know that Winnie the Pooh is all about making friends and creating happy thoughts, but someone's gotta remind him to be a bit more careful when travelling to Asia — especially in pill form.