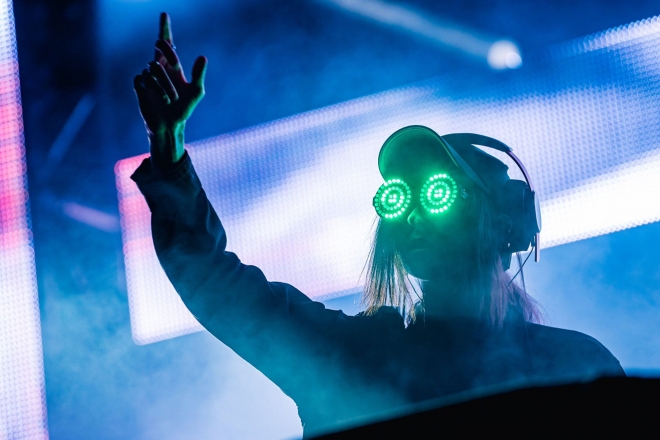 Canadian DJ and producer REZZ has once again harnessed her signature dark edge in a mesmerizing new track which harnesses a cyberpunk atmosphere for an all together relatively ambient affair.

‘Orbit’ is Space Mom’s first single in nearly six months and its unearthly sounds come at just the right time since Halloween is right around the corner. REZZ’s latest offering is an ominous synth-laden song that first surfaced during her Red Rocks Amphitheater stop in September 2019 and fans have been frothing at the mouth for the track ID since.

The eerie instrumental first was finally released to major fanfare and fans are thrilled that she’s turned back to her harder sound throughout the pandemic.

“I made this song a while ago as I was exploring a new tempo, while still keeping an eerie, atmospheric vibe,” said REZZ of the space-like vibe of the track. “When I listen to this song I can imagine myself floating in space, and it makes my brain wander. I realize how microscopic we are as humans and how much of a miracle it is that we exist. It allows me to appreciate nature and the beauty of life more often.”

It’s true, the song draws you into another dimension, a futuristic one, and makes you realise that your existence is phenomenal.

Listen to a highly contagious ‘Orbit’ below:

Elsewhere in the void, REZZ continues to demonstrate her potential as a female producer, and kicked off 2020 with winning her second Juno Award, picking up ‘Electronic Album of the Year’ for her Beyond The Senses EP. Also, she was featured in Underplayed, a documentary that investigates and explores the culture of exclusion of leading female artists. In August, she also teased that she’s working on a new album although no further information has been divulged.