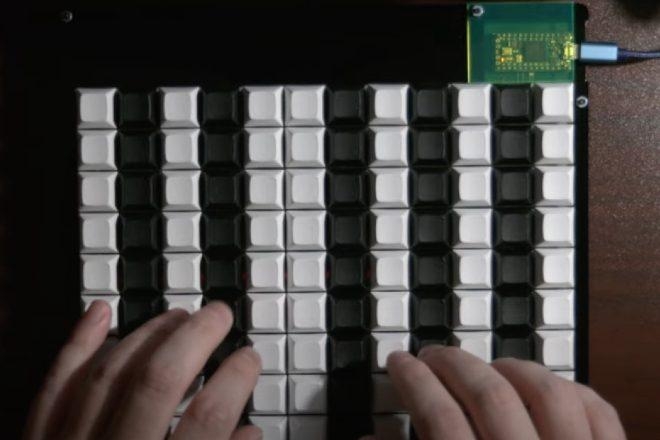 A Reddit user has turned their PC keyboard into a MIDI controller, which is entirely USB-powered and works with MAC or Windows.

Made by user xpercipio, the keyboard, named the 'xp120', was made using 120 keyboard switches. These switches have been specially organised in 12 rows of 10.

Each of the rows is coloured in black and white so that they can be differentiated, and xpercipio has programmed it so that each switch triggers a note. The first column is C, then C#. The two white columns next to each other are E and F.

Read this next: New documentary looks at pioneering Chinese synths, including the Yema YM-8501

Writing on Reddit about their creation, xpercipio says: “This is a teensy powered midi board that uses cherry mx clear switches. They are tactile in feeling. And boy are they.

“The springs are stronger than the ones I am used to, and they make my experienced switches feel like linears, even though they are tactile also.

“120 buttons with unlimited polyphony. no velocity or aftertouch though. I don't utilize those much other than automation anyways."

The creator has also made a YouTube video where they explain how the keyboard can be played and shows a demonstration of the makeshift MIDI controller in use.

They say that they are playing “just Maj7 arpeggios, then I press a bunch of keys to demonstrate the polyphony. Then its a Db 6/11 arpeggio.”

Read this next: Moog has released a new build-it-yourself semi-modular synth

In the video, they are using the MIDI controller in conjunction with a piano, saying that they are playing 'the maverick' from native instruments - played with a randomised velocity range from 70-80.

Watch the video about the midi controller below.