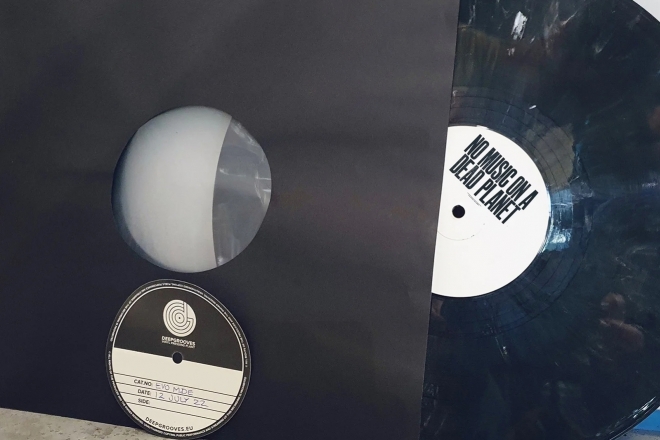 There are also some things that money can't buy, and this would be one.

It's arrived. Around Earth Day 2022, British environmental group Music Declares Emergency announced that they would release the world's first vinyl for-the-planet piece of vinyl made from bioplastic with Evolution Music. The record has finally been produced in a very limited run, and just 20 pieces are up for grabs...if you're lucky enough to win one.

The four-track EP — titled No Music On A Dead Planet — features artists from the Ninja Tune and Secretly labels, both having been longtime supporters of Music Declares Emergency. They are Bicep, Porridge Radio, Angel Olsen and Black Country, New Road, all showing their support for a vinyl alternative while also becoming a unique piece of music history.

Peter Quicke of Ninja Tune said: "It is very exciting to be trialing sustainable bioplastic vinyl pressings, and with such brilliant tunes! We all love vinyl but the current manufacture process involves a significant amount of pollution, so we've been looking for alternatives. Massive props to Evolution Music for coming up with a solution."

To join a prized draw to win one of 20 copies, you can enter by donating between £5 and £50 to a crowdfunding campaign. Winners will cop the first publicly available example of a bioplastic vinyl alternative developed by Evolution Music as part of their mission to decarbonise the production of physical products in the music business.

The money raised will go to Music Declares Emergency and help fund the organisation's work in raising awareness around the global climate and ecological emergency within the music industry. Music Declares Emergency is run out in the UK by a group of artists and music industry professionals to reduce the impact of the music industry at large on the planet. They're garnered big support from artists like Brian Eno and Paul Cook, and they’ve recently launched a US chapter with support from Billie Eilish, Bon Iver, Arcade Fire and more.

"We bring the music industry, artists, and fans together to direct the power of music to call for a fairer, greener, planet for all," say Music Declares Emergency. "Our work encompasses support and partnership for industry innovations, curation and dissemination of effective artist messaging and collaborations cross sectors and borders."

We are part of the world’s first bioplastic record release! Only 20 copies will be made available and you can enter the prize draw to win yours here: https://t.co/0JNdiG00Gh#NOMUSICONADEADPLANET pic.twitter.com/TlMSZ4GPxA

To win by entering into the draw here. You can also pick up one of many super cool t-shirts by Music Declares Emergency and their creative collaborators to support them and raise awareness from home here.