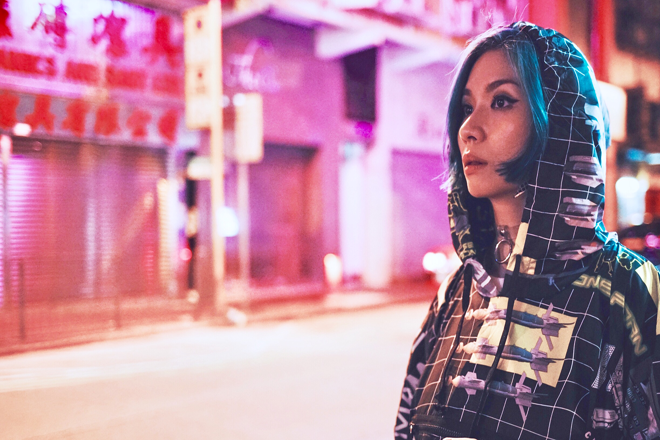 Over the last year and a bit, Miss Yellow has been highly preoccupied with this particular collaborative project, that depicts and showcases her home city of Hong Kong in a cyberpunk presentation. The joint creative venture between Hong Kong’s Miss Yellow and VJ Ferrous, titled Kowloon Rave, is not a first one, and it was first presented at Sónar Hong Kong in 2019. Miss Yellow was one of the local highlights, opening up the late night section of the Sónar Club stage last year. Unfortunately for Sónar fans, this year’s event was postponed due to the risk and impact of COVID-19, and it was exactly for this reason (of major and music-based events being cancelled over the last 6 months) that a conversation between Mixmag Asia and Miss Yellow spurred the idea behind this exclusive.

Hong Kong as a city is a deep cavern of inspiration, an unexpected melange of futuristic atmosphere with contemporary and colonial aesthetics, where the soundscape of a 90’s rave could easily be easily reminisced by walking through neon-lit, industrial streets of the outer city. Miss Yellow grew up being fascinated by 90’s rave culture in the UK, which was patented by authentic techno and acid house. While immersing herself herself into 90’s audio delights, her upbringing was also encompassed by the cyberpunk eye-candy of the ex-British colony she calls home.

With her expressions of freedom being at the core of this collaborative project, VJ Ferrous has managed to perfectly portray the DJ’s upbringing, her passion for raw techno and industrial sounds, and her attachment to a sense of timelessness. From a young teenager to now, she’s been an avid explorer of sensory elements of the urban environment, but she could only experience that 90’s rave culture through the words and memories of her friends, as that rave culture she was enamoured by was taking place on the side of the planet.

The soundtrack to this 80 minute video is the live recording from Miss Yellow’s DJ set at Sónar Hong Kong in 2019, and VJ Ferrous overlays a plethora of messages that depict contrasting architecture, the city’s iconic cyberpunk vibes, and touching on close-to-heart topics like freedom, faith, mass surveillance, the housing emergency, spirituality and virtual reality. While Hong Kong is like an augmented reality scenario, Kowloon Rave is the virtual reality world Miss Yellow has created for herself, and for you, so why not dive in?

Check out the video below.