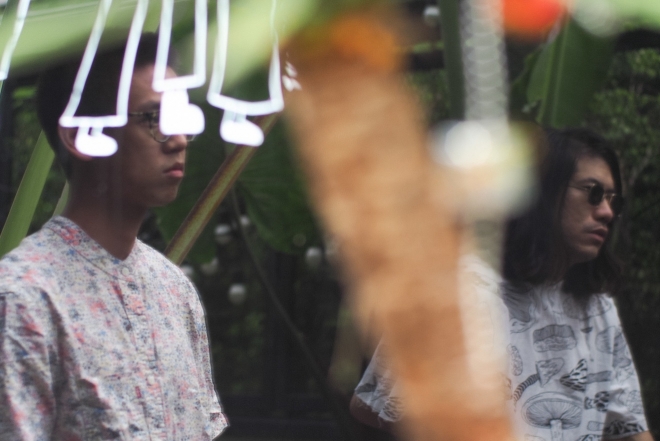 Within the burgeoning music scene in Bangkok, the catastrophe of the Covid-19 pandemic has effectively put nightlife in a chokehold. While this has stunted and stalled some artists, others have taken the time to blossom. This break in performance opportunities has afforded artists a rare extended pause in which to refine their sound, improve their performances, find new inspirations or in some cases tear it all down and start over from scratch.

When locals Kosit and Panpakorn formed the group Pissingling in early 2018, the duo weren't sure where things would take them. With Kosit manning up the percussion and Panpakorn on guitar and vocals, Pissingline produced and released a self-titled four-track EP in the same year that was leaning in a psychedelic grunge direction. In a formula similar to Nirvana's Bleach, these early recordings are full of aggressive energy and extremely rough around the edges. The band went on to perform some shows around Bangkok and begin preparations for the recording of their next album, but in early 2019 Covid swept in and put a stop to all that. Finding an audience for the music Pissingline was making suddenly became even more difficult than it was pre-pandemic and thus the project was shelved indefinitely.

Inspiration can come from the strangest of circumstances though, and in 2021 the duo of Kosit and Panpakorn reunited with a new compulsion to work on a new musical project together. As fans of the wide-ranging underground electronic music scene in Thailand, the boys decided a shift away from live instrumentation and towards digital and analogue hardware would make more sense as production could then be handled in simple and small home studios. Somewhere along the line, the new electronic duo Gadagem was born.

Gagadem shifts away from the duo's previous aggressive nature and instead focuses on making dance records with house music tempos, driving bass and dreamy synth work while still conveying similar messages in their music. Their latest release 'Tails' is a quirky indie dance jingle about individuals that refuse to blend into the crowd. This will be the second release from the group following their initial effort in 'Abelebe' which was released in summer 2020.