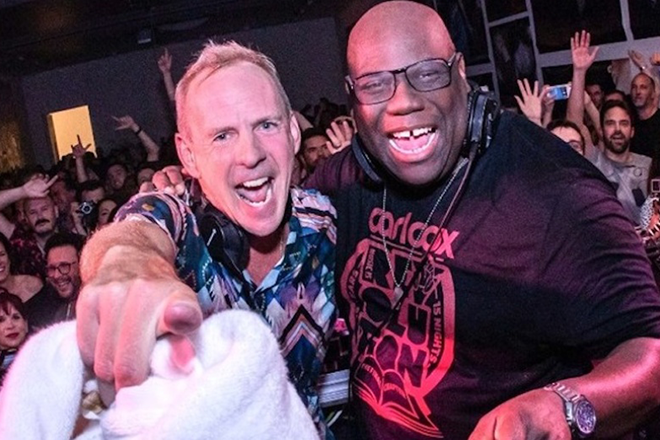 'Dance music pioneers, Carl Cox and Fatboy Slim have teamed up on the new single ‘Speed Trials On Acid’.

Due for release on Friday, April 8, the new collaboration also includes a feature from spoken word artist, Dan Diamond.

A snippet of the forthcoming track was posted via Dan Diamond’s Instagram of Carl Cox playing it at Ultra Music Festival with the caption: "This is so special to me. I've been waiting for this for 25 years."

Read this next: Peggy Gou is returning to Bali for a cliffside gig next month

Diamond also mentioned that he will potentially be working with Cox again on a "upcoming live electronic project”.

Watch the clip of ‘Speed Trials On Acid’ below.

Cox will also return to Brighton this summer to perform at the second edition of On The Beach.

Read this next: Ricardo Villalobos goes for the dubbed-out treatment on new A Mountain of One single, 'Black Apple Pink Apple

After performing at the sold-out debut event last summer, this year he will be performing alongside other “very special guests” that are still to be announced.

Carl Cox will be headlining the beach party on July 23 which the festival has said via Instagram that “the global superstar will be playing on the iconic Brighton beach with a selection of his own personally invited friends and peers.”