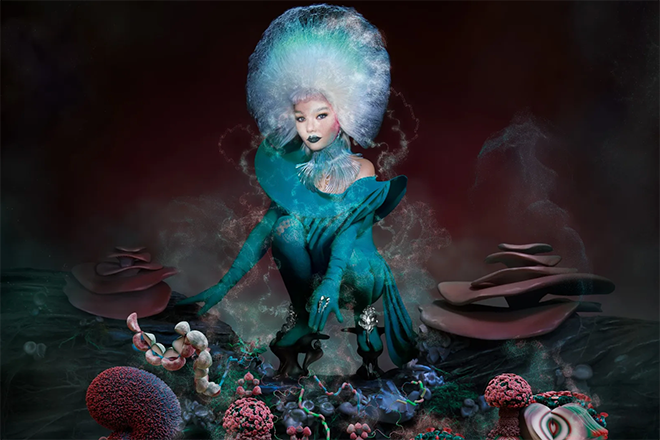 Just weeks since news broke of Björk’s first album in five years, she has since announced a release date and cover art for the new album, ‘Fossora’.

‘Fossora’ will be out on September 30 and is inspired by her experiences in the pandemic as well as the influence of gabber.

The cover art created by herself and her friend, James Merry with photography from Vidar Logi, sees the artist crouched within a psychedelic world of nature and smoke.

“Each album always starts with a feeling that I try to shape into sound this time around the feeling was landing (after my last album utopia which was all island in the clouds element of air and no bass) on the earth and digging my feet into the ground.”

Björk explained the influence of the pandemic on this album explaining: “Seven billion of us did it together/nesting in our homes quarantining/being long enough in one place that we shot down roots,”.

Speaking on the title ‘Fossora’ she said: “it is a word i made up. It is the feminine of fossore (digger, delver, ditcher). So, in short, it means "she who digs" (into the ground).”

Read this next: 20 gabber rave photos that will make you want to party like it's 199 BPM

Adding onto the questions about this album being gabber-inspired she wrote that the album, “is about bass, heavy bottom-end, we have six bass clarinets and punchy sub,” she concludes.

‘Fossora’ tracklist is as follows:

Check out Björk’s ‘Fossora’ cover art and full statement below.