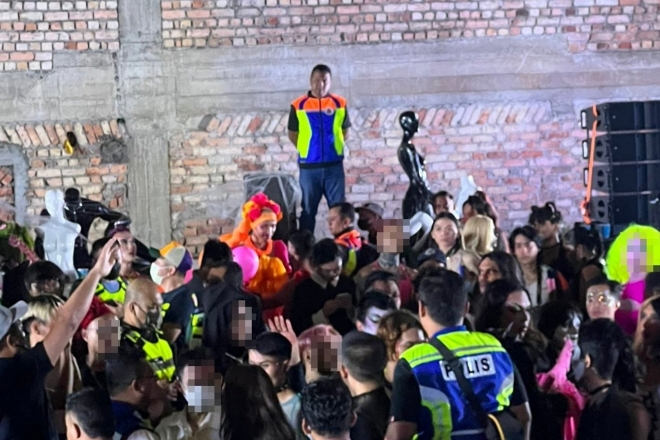 Reports from Kuala Lumpur claim that authorities raided a venue in the capital called RexKL last night, not only shutting the party down but also detaining several prominent drag queens, transgenders and those who appeared to be cross-dressing.

The event was part of a series called Shagrilla, a popular party within the queer community but loved and attended by all. The party was Halloween-themed, with a spirited community dressing up in bright colors, extravagant patterns and even cross-dressing in celebration of the theme.

Around 10pm, authorities entered the venue, which is lauded as a cultural and community space for events, and closed off the entrance. Guests at the event were forced to remain inside, sitting on the floors for hours. While the situation was calm, several people—primarily those in drag—were pulled out and taken away by police...but not without a round of applause in support and solidarity from partygoers still inside the venue.

In a Twitter post by Malaysian activist Numan Afifi at just past midnight, he said that those detained, including himself, had been taken to the office of the Federal Territories Islamic Department (JAWI), where they were being investigated by the religious affairs authority. Not long after, he Tweeted that most of the people detained by JAWI had been released on bail thanks to volunteers. There were still others who had been detained by police, the last of which were released today.

RexKL is a popular venue in downtown Kuala Lumpur. You might remember it as the place that hosted Circoloco in 2019, an event that had cast the Malaysian capital in the utmost positive spotlight and was generally well-received locally. The reputable venue has a capacity of several thousand people and, according to the organisers, the event had all the necessary permits, with organisers even meeting with police prior to the party to brief them. If the event was indeed legal, the raid would be a blatant and obvious targeted attack on queer and marginalised communities, singling out sexual orientation and gender identity—and that’s the sentiment shared across the music and LGBTQ+ communities in Malaysia—which is recognised as one and the same all over the world.

JUST IN: PDRM and JAWI raided a Halloween event at REXKL on Saturday (October 29) night.

Several drag queens and transgender people are reported to have been detained by Jawi for investigations.

The hashtag #RexKL is now trending and comments from Netizens largely condemn last night’s raid, blasting officials for using the LGBTQ+ community as a scapegoat. Others say the raid was politically driven, highlighting the closeness of Malaysia’s general election (GE15), which is taking place on 19 November. But after poring over comments sections of the threads, what’s alarming is that the predominantly Muslim country is still divided on the issue (!!!), with last night's event and its public reception marking a big step backward in human and fundamental rights within Malaysia. (It’s 2022 people!).

Malaysian authorities made themselves busier than usual over this year's Halloween as the Shagrilla event was just one of the events raided over the weekend. Several other posts on Twitter show food court and event space Tiffin was also raided whilst hosting an emo music night.

Mixmag Asia fly our rainbow flag with our friends in KL