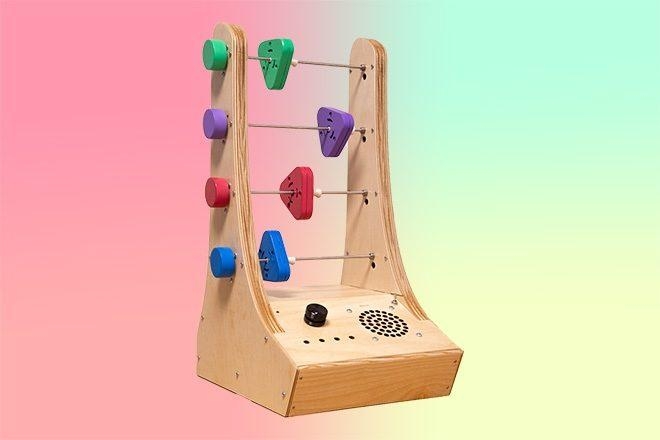 The ancient mathematical tool, the abacus has been transformed into a new synthesizer named the Abacusynth.

Designer of the Abacusynth, Elias Jarzombek, created the new model of synth as part of his thesis project.

“Just like an abacus is used to learn the fundamentals of math,” Jarzombek says, “the Abacusynth can be used to explore the building blocks of audio synthesis.”

Read this next: Moog has released a new build-it-yourself semi-modular synth

The Abacusynth has the look of an abacus with four rods holding a bead that can be pushed along the rod and even spin.

Moving the bead creates timbral shifts in the synth’s sound with light sensors responding to this movement working out the waveform and harmonic.

Jarzombek says: “The spinning interaction takes advantage of physics to illustrate a sonic phenomenon. It's what sets the interaction apart from any software, so it was the first thing I started developing.”

The Abacusynth includes a free plug-in version, created by Jarzombek for Ableton Live with the goal continuing to encourage experimentation when creating electronic sound.

“Most synths cater to the ‘Big C’ creator, the professional or virtuoso who requires granular control in order to achieve their goal, and who is either willing or required to learn complex interfaces in order to do so,” Jarzombek says. “My target user is a “little C” creator, someone who is being creative just for the fun of it, and is more interested in feeling good while creating, instead of being focused on the outcome. This type of engagement is just as creative as “Big C”, but is not studied or considered as much when talking about design.”

As it is part of Jarzombek’s thesis, the physical version of the synth is not available as a commercial project but he wishes to expand on his idea by adding that the core concept could be reduced to individual modules that could be stacked or linked together in some way,”.

Watch a video about the Abacusynth below.