Rākhis, aka Shikhar Yuvraj Manchanda, is an Indian musician, producer, performer and mix engineer. He acquired fame as guitarist in acclaimed hardcore / metal band Reverrse Polarity over a decade ago, and has had a varied career since – acting as Head Of Music for acclaimed Desi hip hop label and art collective IncInk and co-running The Beast India Company recording studios in Mumbai, alongside his own eclectic music projects.

Hot from a wild live performance at The Lab Goa, his debut five-track EP ‘Bears Off The Leash’ is out now, showcasing the dynamism of his hybrid, experimental sound. We spoke to the Mumbai-based artist about the evolution of his sound, inspiration, experimentation and what is next for the Indian electronic music scene.

Read this next: Electric India: Kranking up bass kulture with Sohail Arora

Tell us about your EP 'Bears Off the Leash'.

The EP is an amalgamation of my creative landmarks through the past five years in music. I wanted to offer a mix of analogue and digital sounds, some harmonious and some dissonant. These are soundscapes that I created out of my first love, my beloved guitar, marrying live and programmed sounds. I think about what’s going on in the world, and these tracks are an expression of some of those thoughts. ‘Red Neck’ is a "Tandav" (dance of fury) of all of my emotions; ‘Bassmama’ is my thoughts on how insignificant we are in this universe and the greed-driven rage which has corrupted our very reason to live; ‘Assphault’ is about us acting like children playing with Lego blocks and our constant need to form concrete jungles around us serving as our very own death traps. ‘Lonewolf’ is the soundtrack to the surreal experience of seeing someone possessed by the supernatural. And finally ‘Proxy-Moron’ is a track about the current scenario of drug use and dependence, and the big pharma conglomerates' constant push for the subjugation of the people of this planet.

Can you explain the meaning behind your name, Rākhis?

Rākhis is an anagram for my name “Shikhar” and also the love I have for causing a ruckus with the kind of music I make, so hence Rākhis causing ruckus. Being from a metal background, I always found solace in the chaos-driven madness when it comes to expressing my point of view.

What does this EP symbolise for you? Where are going with this narrative?

This EP is all my emotions carved out into a sonic space that I want to offer to the world. This EP symbolises my love for experimenting with the genres that I have experienced in my journey as a musician. Growing up I was heavily into conspiracy videos that I would sit and watch them for hours on end. All the thoughts and feelings derived from there, I feel that it culminated into me trying to express my madness with sound and use all my thoughts and imagination to provoke emotion without using a voice.

Read this next: The Asia Diaries: Qrion tours India 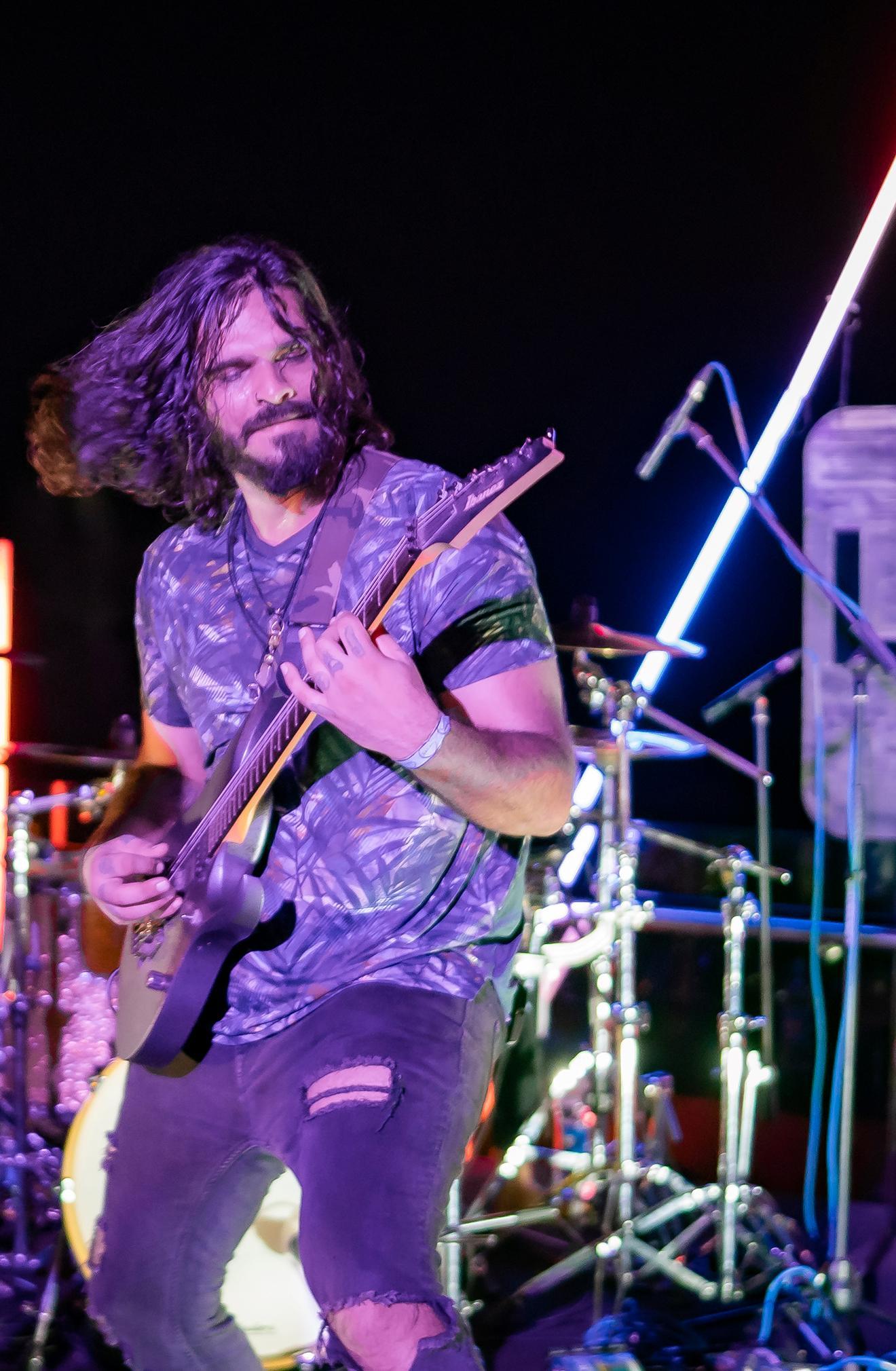 Sonically it feels like you are channelling some of the classic rock / dance crossover giants of the '90s and early 2000s - like The Prodigy and Pendulum or Chemical Brothers at their heaviest. Were these kinds of acts an inspiration?

The Prodigy, Apollo 440, Chemical Brothers were definitely an inspiration — the raw energy that they have pushed me to see how I could take unconventional sounds and make people groove to them.

The Rākhis sound is definitely multi-genre and experimental. Do you think Indian audiences are more or less accepting of that eclecticism – compared with audiences elsewhere.

Both my parents are urban hippies. My mom grew up listening to Abba, Led Zeppelin, Jimi Hendrix, Spirogyra. She was flying with Air India so she ended up travelling around the world, and my father was in the merchant navy where he travelled almost all the water ways that exist, visiting all the places that he would pass and wherever the ship would dock. He is heavily into Alice Cooper, AC/DC , Def Leppard, Van Halen and Meat Loaf and so many more amazing artists of that era. I actually saved his concert ticket for Alice Cooper and Meat Loaf as a reminder of where I come from. And then there’s my sister who was part of the first girl pop band in India in this outfit called VIVA, but she was into Metallica, Apollo 440, The Prodigy, Chemical Brothers, Fatboy Slim. So I have definitely been inspired by my family and their music taste and knowledge. Only later did i get into making electronic music, I think in 2014 where I wanted to try writing some electronic music with the backing of a loud heavy guitar. Listening to so many artists experimenting pushed me to also be creative and to try merging my favourite sounds.

As for Indian audiences, I think India is always growing and changing, adapting and customizing lifestyles and art from the Western culture, so I think they would dig it but time will tell how my sound is received by them.

What is your process for making music?

I usually follow my mood, sometimes I have an idea in my head so I reach for my guitar just to track down the idea and then start layering it with sounds either via synths or VSTs on the DAW I use. Sometimes I go blind in searching for a soundscape and then start building on top of that. Many times I usually just start a session file on my DAW where I'll just spit out ideas and sections for 10 minutes and then keep shifting between four-to-five sessions in a day.

I also have my lull days where I'll try to sit and make something and I'll find myself starring at the screens with a complete blank expression, or those lazy days when one doesn’t feel like getting out of bed. When I was only writing music for Reverrse Polarity, I would use a voice recorder on my phone and take ideas down where either I would just hum out the melody or try to beatbox a drum pattern or a bass pattern. I found this very useful at that point in my life and continued using this as a method. I try and make strange sounds or bass wobbles or melodies and then later when I sit on my DAW, I open my phone and listen to them until I find some leading sound that then just gets me in the zone. But I try to imagine what the end piece would sound like in my head and then work backwards, sometimes I hit right on target, sometimes I end up traversing into another direction and then there are a few times where I'll start creating and within 10 minutes I zone out. 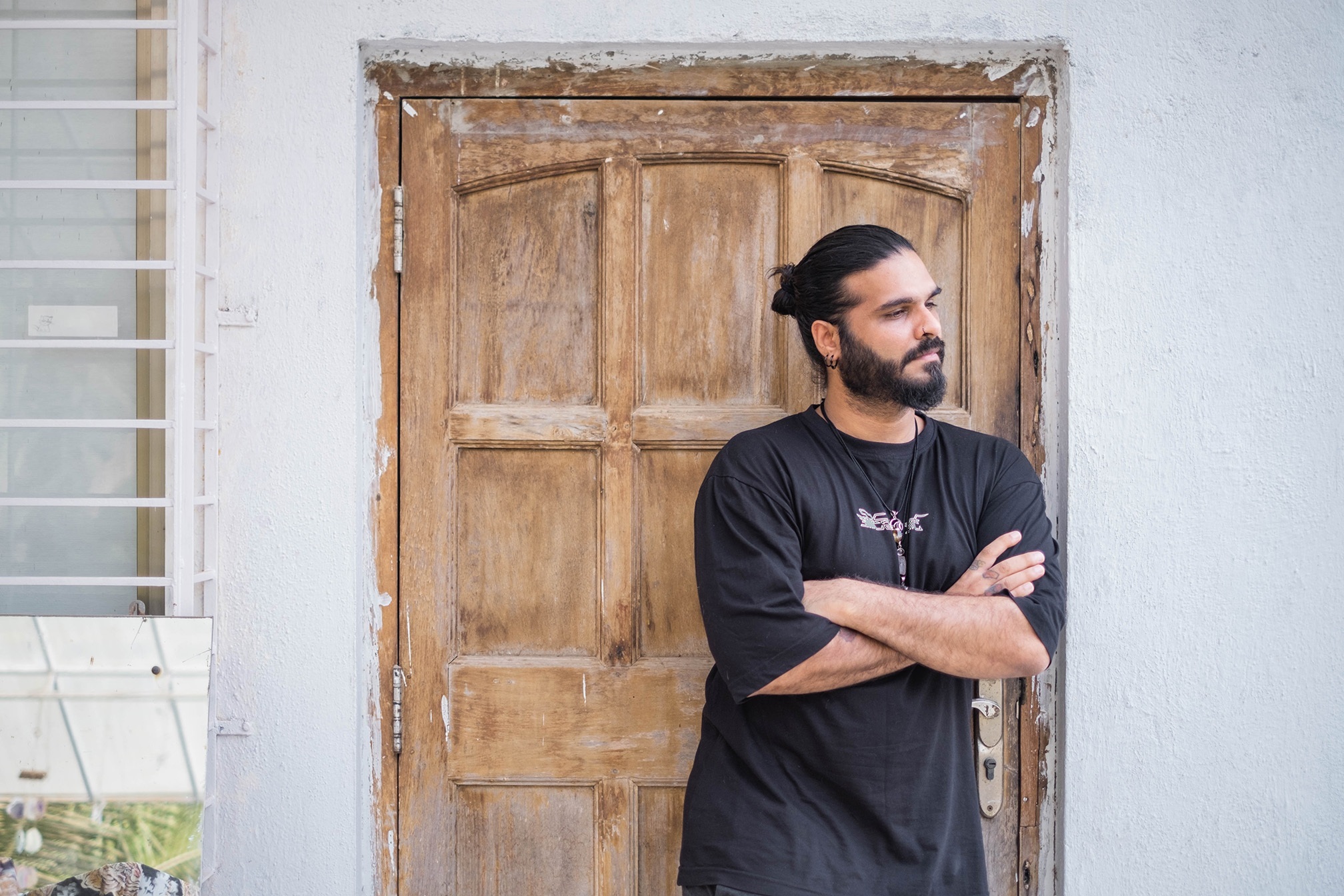 You have been a musician for 15+ years with your metal days with Indian rock band Reverrse Polarity – can you describe the evolution to the Rākhis we hear today?

So my journey started when I was 16 when I picked up the guitar to cover Slipknot and Rage Against The Machine. At 17 I joined a hardcore band called Bitchslap and started touring India before we disbanded in 2006. Later that year I founded Reverrse Polarity with two of my friends. Six months after we formed the band we entered into the third edition of a competition called Launchpad which was hosted by the music television channel Channel [V]. To our surprise we made it to the finals and eventually won the competition which was a big win for the metal community of India, since we were up against other talented bands who came from a much more commercial music space than us. That was a big victory and I still remember how amazing that experience was, sharing the stage with so many talented people. One of the rewards of winning was being on the cover of Rolling Stone's Magazine. In 2012 our drummer passed away which completely destroyed us. We eventually found Gautam Deb to fill the shoes and went on to release out very first album on Universal Records. However, it is difficult to survive in India as a metal band since it's a niche audience.

In 2015 I had travelled to Dubspot(Nyc) with my sister to expand my skill set since I wanted to get into producing my own music. I was under the tutelage of the acclaimed producer and mixing and mastering engineer, Richie Beretta, who had previously worked with a number of trendsetting artists including Major Lazer, Beyoncé, Rihanna and Diplo. This had opened my eyes to the possibility of being a one stop shop.. composing, producing, mixing and mastering my own music. This is where I started experimenting with different genres, combining elements of all the genres and artists/bands that I loved and forming my own madness and expressing that in a sonic identity that would redefine my sound. I wanted to push for a futuristic electronic music project that would aim to constantly push boundaries while exploring experimental realms and offer the listener an unusual form of art which would provoke their own thoughts and imaginations.

Read this next: Electric India: Bangin the drum (& bass) with the legendary MIDIval Punditz

You also double up as Head of Music at IncInk Records, building the sonic identity at the label, tell us more on that.

After we did the track 'DONT HOLD BACK' with Ranveer Singh for the brand Jack & Jones, they commissioned a second track for which we hand-picked four rappers out of an extensive list of 1500+ rappers that came in from around the country. This process and what we were able to create out of it inspired the formation of IncInk. The agenda was to groom, facilitate and equip these artist to go out there and share their vision and message. As a Head of Music my job was to make sure that their art/music would stand out. We never wanted to play safe, we wanted to break boundaries with the sonic identity of the label. I have carefully worked with each artist and stitched their songs together, whether singles or EPs. Apart from that I have composed and produced almost 90% of the music released at IncInk and mixed and mastered all the material released on the label.

We saw you perform at The Lab Goa, your debut hybrid set, how was that after the two years of the pandemic?

The last show I played with Reverrse Polarity was back in 2015. Since then I think I’ve had only two encounters before the pandemic on stage, so I have really missed playing. I have concentrated more on being in the studio and honing my skills. At The Lab Goa, I went into a different dimension when I was on stage, it's like time stopped and everything around me had merged all together. It was a blast being on stage after so long, especially playing with my long time best friend and accomplice and also the drummer for Reverrse Polarity. I remember it being really hot, so it was a pleasant surprise that the audience still took it so well.

Rākhis debut EP 'Bears Off The Leash' is out now via IncInk Records, get it here