In club culture, it’s a given that loud music and pulling shapes are inseparable. Often, the moves you witness on the floor are manifold, erratic, and subjectively individualistic – a beautiful mess, if you will. Now what if I told you that in Singapore, there exists a party series where everyone is completely coordinated, united by synced-up choreography and retro guilty pleasures? Where everyone literally ‘gets down on their knees and pray’ along with New Order, or ‘spins themselves right round like a record’ together with Dead Or Alive? This is, characteristically, the magic of Mambo Jambo.

Arguably the city’s most resilient nightlife series, Mambo Jambo has been a staunch staple of the Zouk Singapore brand since its launch in 1992. While the club titan was already building a formidable reputation in Southeast Asia as a haunt for house music, it wanted an entity that catered to a wider audience unfamiliar with the more niche segment of house culture. 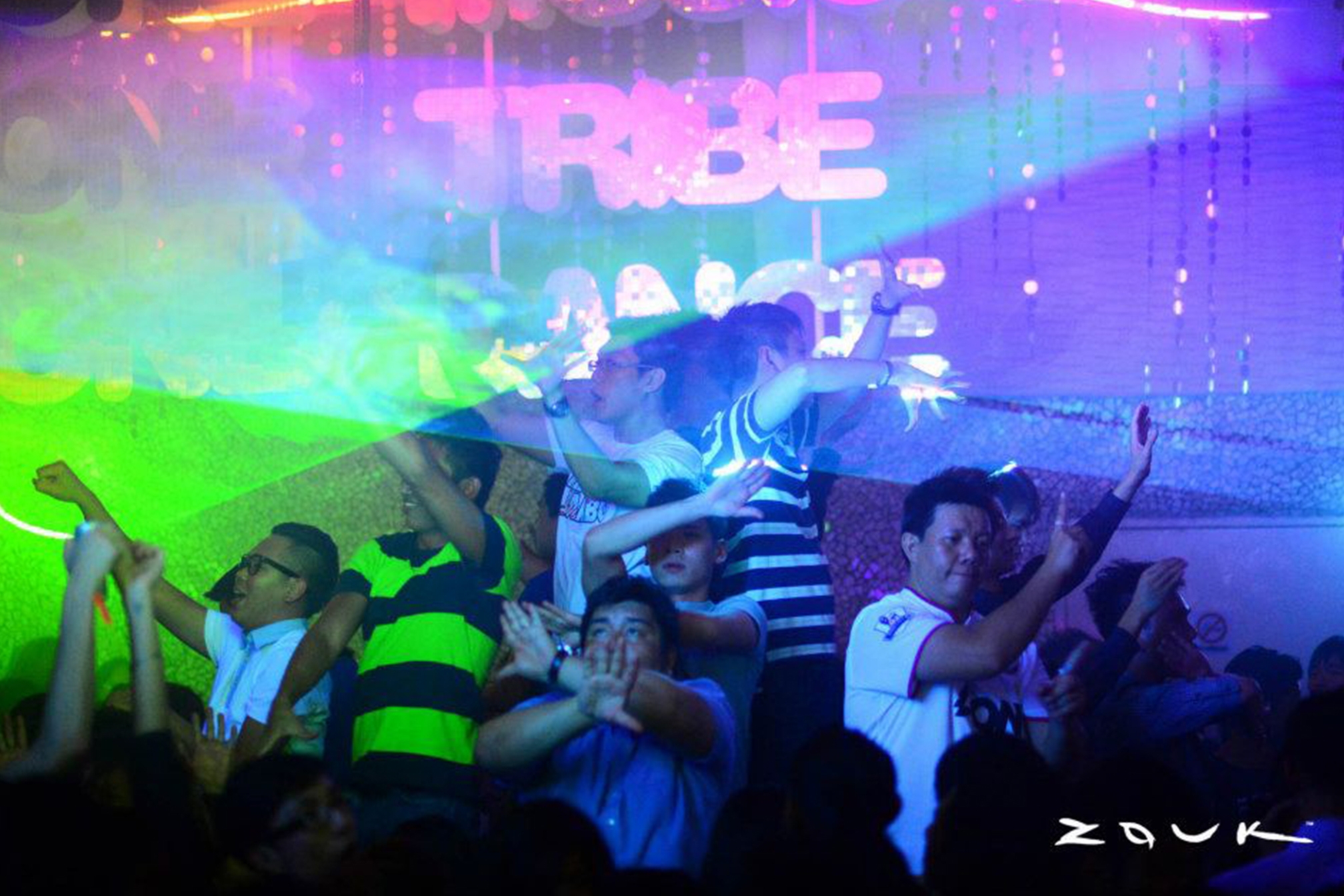 “Zouk was the only club playing house music with a very niche following of fashionable partygoers back then,” long-time resident selector, Jeremy Boon, elaborates. “One day, our founder, Lincoln Cheng, thought of an idea to have a night where we could play everything and anything that would put a smile on people’s faces. People from all walks of life could come together to have a great time, to enjoy the familiar tunes from the ’60s to current hits.”

What ensued was a musical wonderland of nostalgia. The large chambers of Zouk would echo with timeless classics and feel-good anthems. In its heyday, when it evolved into a weekly affair every Wednesday, the club would brazenly blast pop tunes from the vaults of the ’70s and ’80s. The night could shamelessly sway from Cyndi Lauper’s ‘Girls Just Want To Have Fun’ to The Bangles’ ‘Manic Monday’, swing from a-ha’s ‘Take On Me’ to Erasure’s ‘A Little Respect’, and pounce from Bon Jovi’s ‘Livin’ On A Prayer’ to Joan Jett & The Blackhearts’ ‘I Hate Myself For Loving You’. Whether it was new wave or classic rock, synth-pop or disco, the gems churned out from the console would always draw huge reactions from the mixed crowd of young and veteran clubbers. 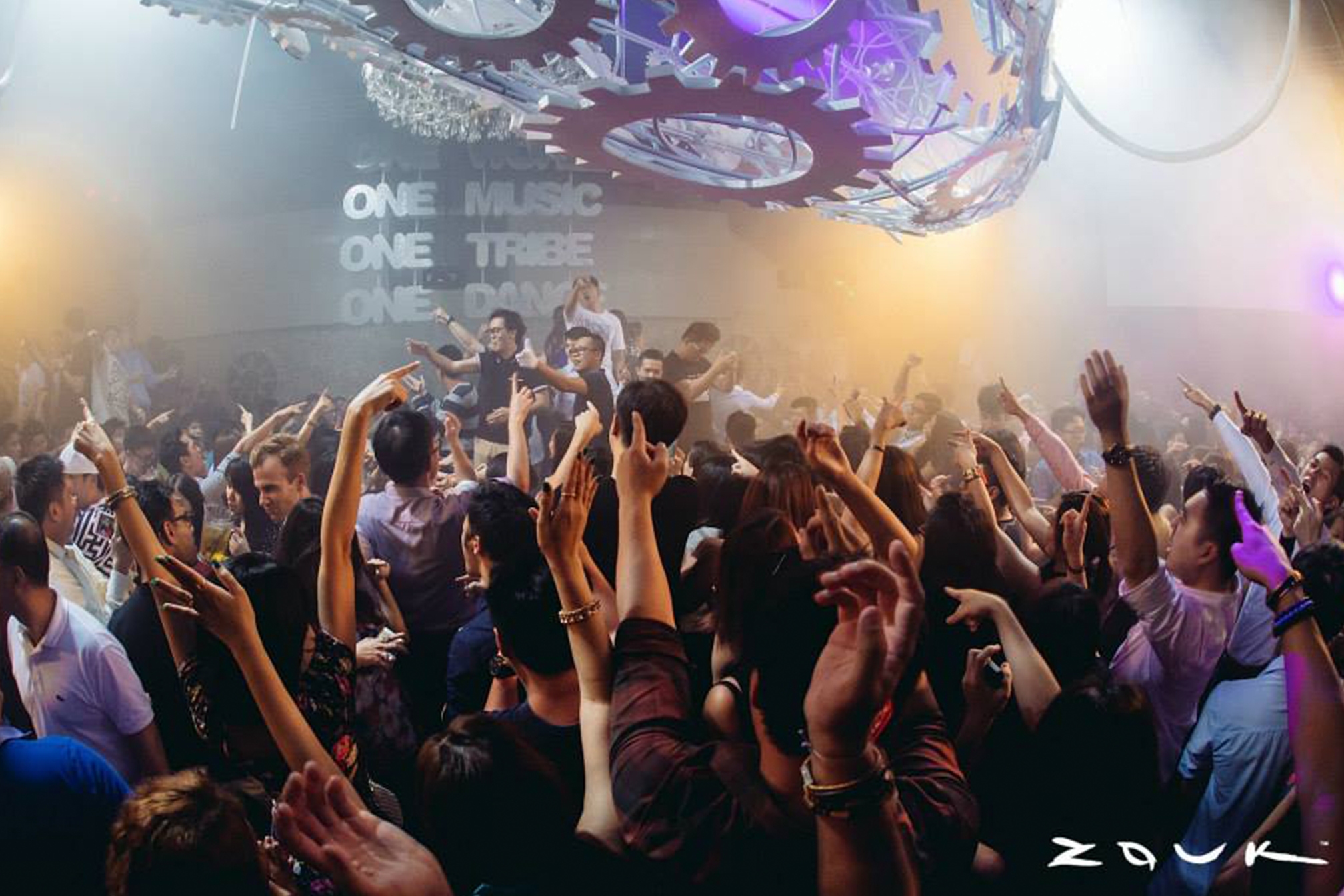 But this reverence for retro was merely the tip of the iceberg regarding Mambo Jambo’s universal appeal. The peculiar quality that truly made the party pop was the coordinated dancing; an unexplainable phenomenon that took on a life of its own. Consisting of simple gestures that everyone could pick up on the spot, these moves would follow the lyrics to these anthems with intricate detail. “Time” would be a tap on the wrist, “love” a heart-shaped sign, “pray” would be your hands clasped together and “electric” a zigzag sign. Even if these moves weren’t intuitive to you, one simply needed to look up to the divine Mambo Kings and Queens atop the podiums leading the crowd like zealous cheerleaders. And the next thing you know, you’re miming along to Kylie Minogue with your palms on your head.

Now if you're thinking, this sounds like the corniest, cheesiest, most preposterous thing you’ve ever heard coming from a club’s dancefloor, you’re not alone. I still recall my virgin Mambo Jambo experience back in 2006, exposing myself to the cult-like bacchanalia of this strange event. I remember feeling overwhelmed and confused amidst the animated sea of bodily movements, filling the room with an inextinguishable energy that would make Richard Simmons break a sweat. Bemusement turned into amusement, when I closely scrutinised the lay of the land and realised how seriously these Mambo Jambo devotees took the dancing; the sight of bulky, tough-looking men (who looked like they’d pick a fight with you outside) showing elegance in their delicate finger movements will always be humorous to me.

But the thing is, the joy of Mambo Jambo is magnetic and infectious. Mambo Jambo isn’t an event where you can lurk like a wallflower and not feel the positive vibes. You might feel a tinge of embarrassment when you first start attempting the moves, but after a few shots of liquid courage down the hatch, you start to bust down your barriers and get off your high horse. Yes, Mambo Jambo is cheesier than a Quattro Formaggi, but that’s what makes it so darn fun. It’s this very reason why Mambo Jambo ended up being the default ‘gateway party’ for many Singaporean youngsters and greenhorns new to clubbing. Partying is about leaving your inhibitions at the door and being open to new experiences, and Mambo Jambo became that transitional aid. After all, it’s not every day you get to bust the moves of ‘YMCA’ with hundreds of people. 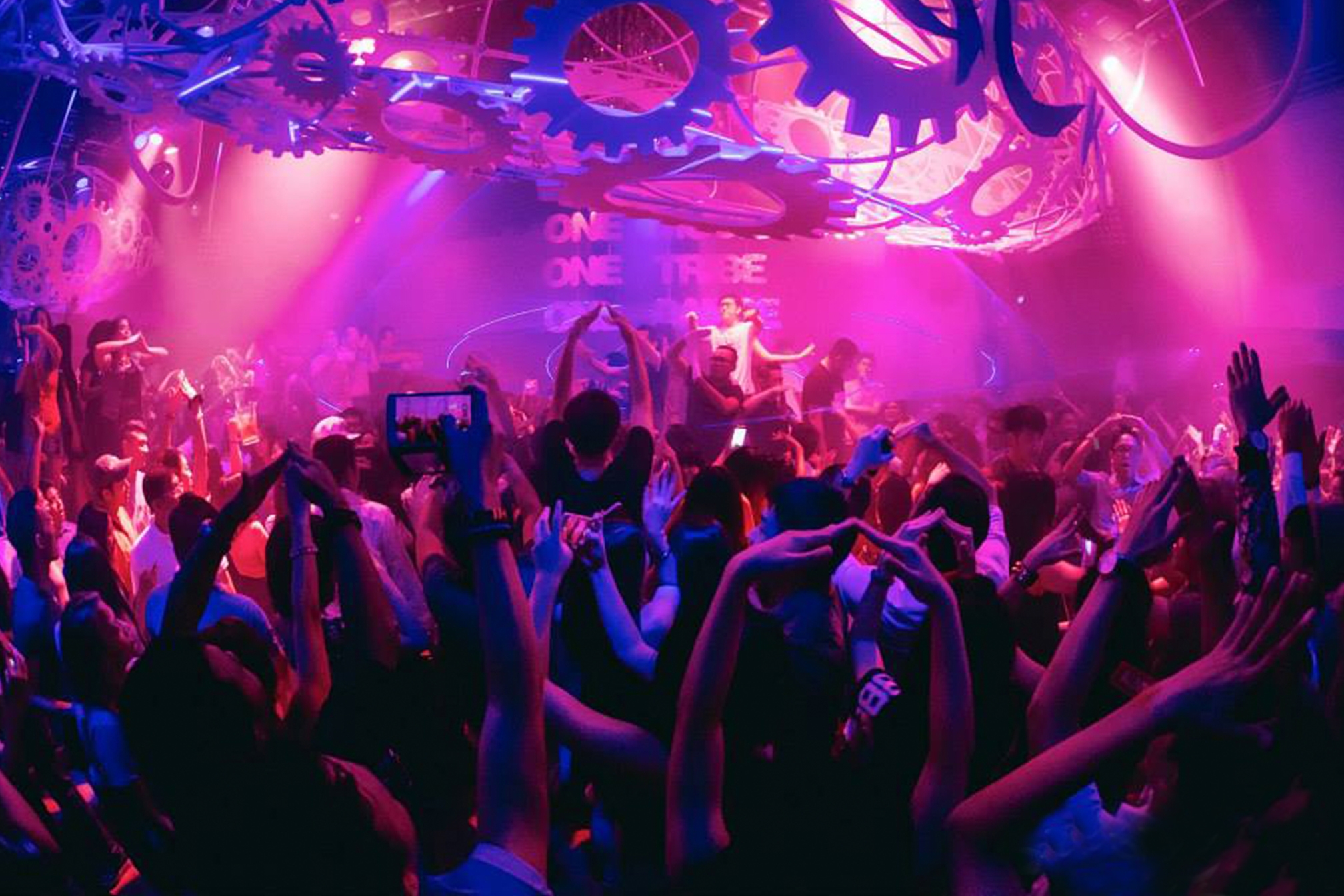 Even after the years have passed, Mambo Jambo remains a momentous occasion and milestone for many seasoned partygoers. Local synth-pop doyenne, The Analog Girl, recounts her experiences growing up with it. “I was pretty much a few-lyrics, just-house-and-techno-all-the-way kind of clubber at Zouk. So when Mambo Jambo came along, it was a breath of fresh air to me. I could actually dance to pop songs from the ’70s and ’80s in a public space and not feel guilty about it because Zouk has always been this safe space for me. I do remember a time when the synchronised dance moves weren’t a thing yet. It was just a carefree night for us to let our hair down on a school night.”

While some turned to Mambo Jambo to escape the stresses of school, others – particularly young Singaporean men – relied on it to blow off steam from being cooped up in mandatory National Service. Veteran DJ and stalwart of the scene, Ulysses, saw it as a way to bond with his batchmates, even though the coordinated dance moves weren’t his cup of tea. “I can count the number of times I actually went for Mambo nights at the old Zouk. I was still on National Service duties at that time, and if I did, it was usually with my campmates when we had our nights off. I hated the synchronised dance moves lol! Nevertheless, it played an important part in bringing people together.” 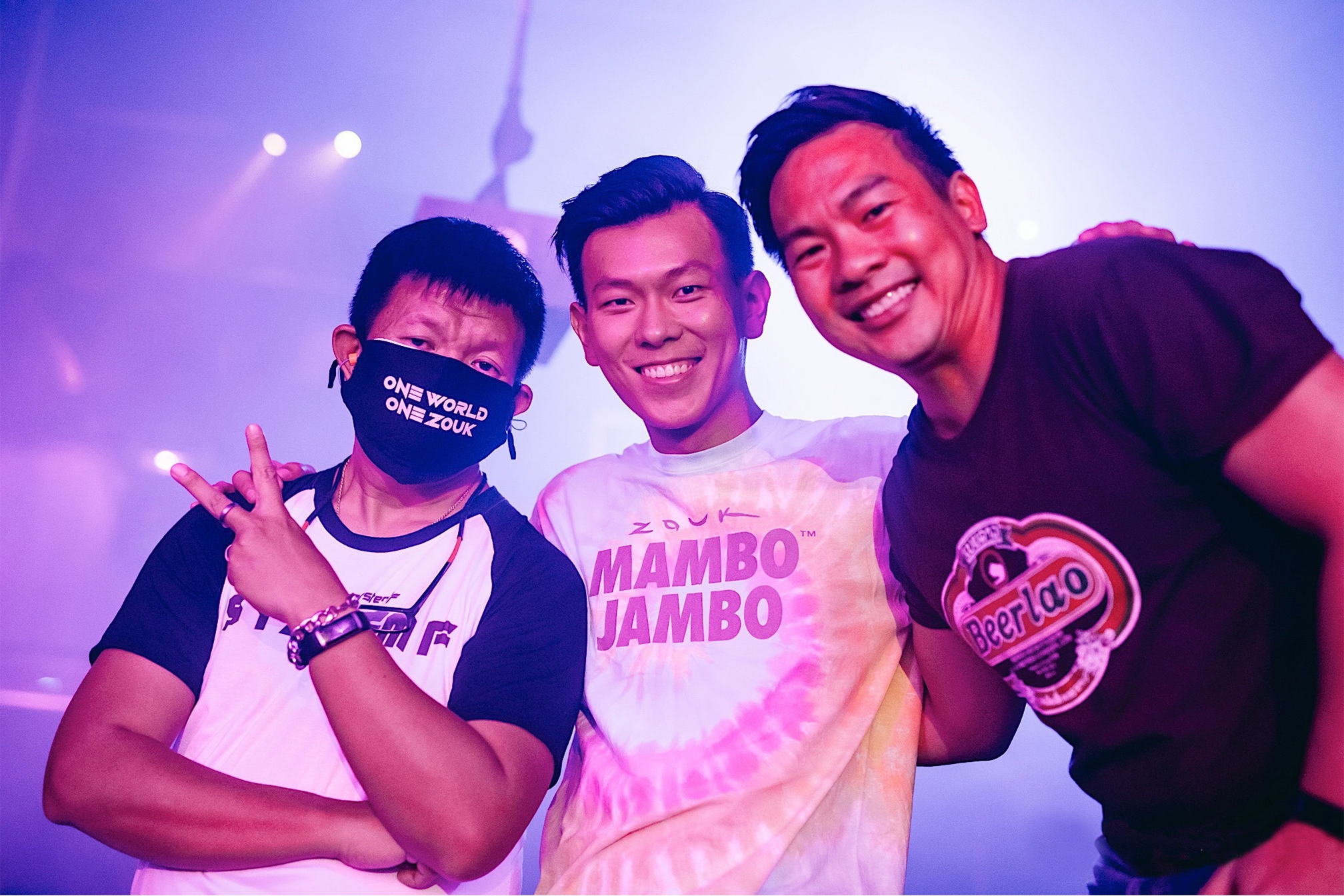 “The first time I ever went to Zouk was a Mambo night,” recalls Sophie Wee, an ardent patron of the scene. “By the time I got to the dancefloor, the Spice Girls were playing and I thought that was just perfect; couldn’t leave after that. I think Mambo Jambo has played a big part in educating clubbers in my generation about dance music from the ’70s and ’80s. It was a guaranteed good time and you were sure to lose your voice the next day because you spent the whole night screaming lyrics to every single song.”

Despite the countless memories it helped forge for Singaporeans of all ages, Zouk eventually stopped the weekly run of Mambo Jambo in 2012. But instead of letting the series hang up its boots, the club turned it into a monthly affair, further transforming it into a novelty fiesta that drew even more anticipation. Even after Zouk relocated to Clarke Quay in 2016, the Mambo Jambo brand was brought along with it, showering the spirit of Mambo onto younger generations of clubbers. And furthermore over the years, the event was saved for tie-ins with big seasonal events like Singapore’s National Day and the Singapore Grand Prix, bestowing upon it a patriotic Singaporean identity that local partygoers were proud to be a part of. The evolution and ripening of Mambo Jambo not only made it an identity synonymous with the Zouk brand, but a pop cultural movement recognised by Singaporeans across the island. 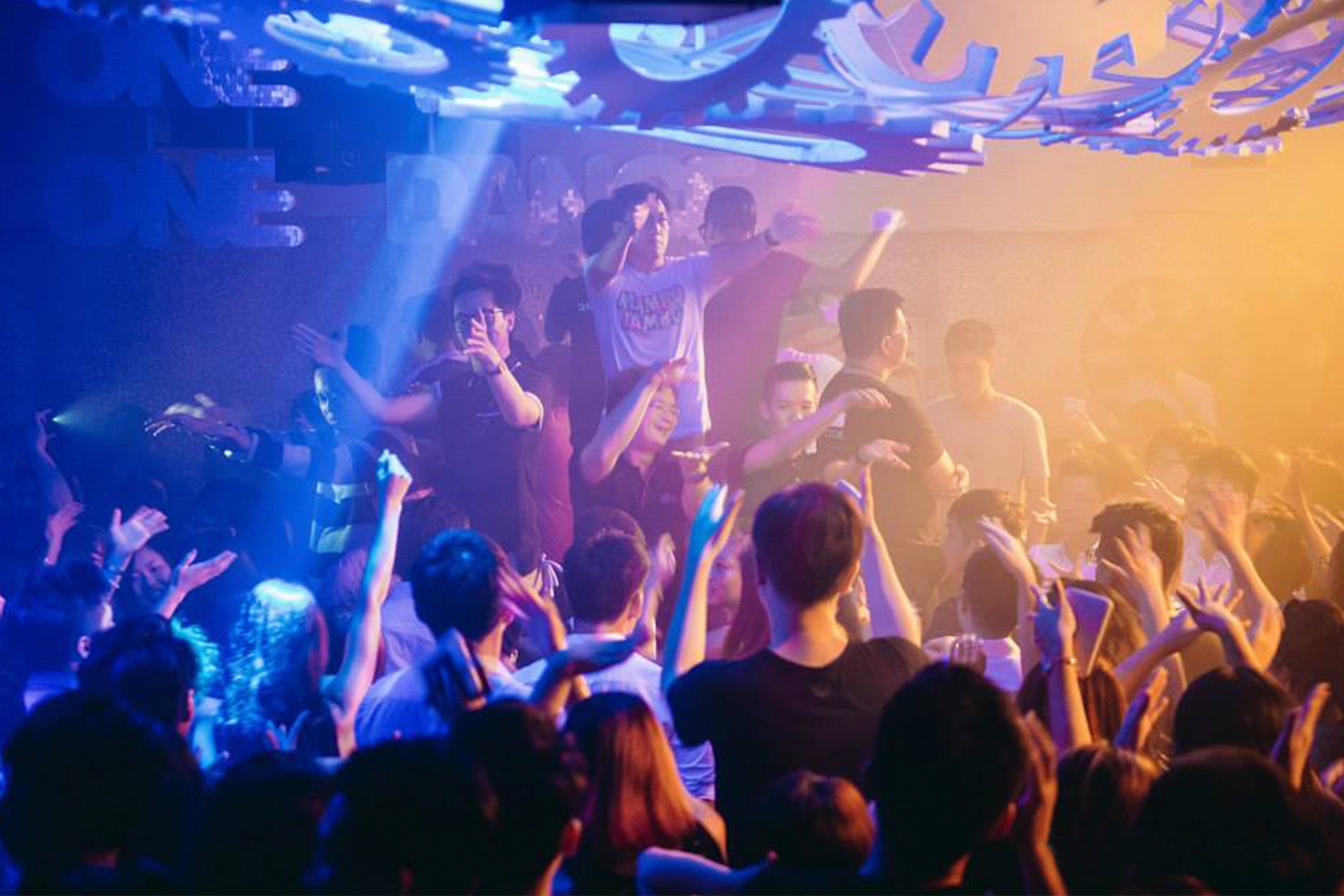 “Mambo Jambo plays music that most Singaporeans can relate to as it was something they grew up listening to,” Jeremy shares. “It’s important to nightlife because it’s a local and uniquely Singaporean brand, as well as an identity that Singaporeans can be proud of. Overall, it’s a very Singaporean vibe, and not just a tribute night but pop culture to many. It’s clear that Mambo Jambo brings everyone together, just like when we celebrated National Day in full unison with the crowd singing to the song, ‘Home’ [a Singaporean anthem].”

This undying legacy even inspired its own documentary, a rarity for Singaporean parties. In 2016, local musician and film-maker, Dave Tan, crafted his ode to Mambo Jambo titled ‘Blame It on the Boogie’. The independently-produced homage was wholly crowdfunded – indicating the mass appeal of the series – and took seven years to complete. The homage was eventually privately screened at alternative cinema, The Projector, on the same day as the last Mambo Jambo party at Zouk’s old address.

Today, the Mambo Jambo phenomenon lives on with Zouk’s digital programme, in light of the ongoing nightlife restrictions that’ve given physical parties the red light. Online, Jeremy Boon keeps its legacy alive while attracting thousands of views. In some videos, you might even catch guest Mambo ambassadors exhibiting the series’ signature moves to encourage participation at home. It might still seem humorous to many, but with the persistent stay-home circumstances, this was most certainly a welcome respite that even the grouchiest of clubbers would accept.

In 2021, this positive role of Mambo Jambo endures, and the team behind Zouk is determined to keep its electricity going. “The role of Mambo Jambo is always hand in hand with Zouk’s mission – having people from all walks of life come together to have fun,” Jeremy explains. “With clubs remaining closed, we’re incorporating Mambo Jambo-themed events into various Zouk pivots so people can still enjoy themselves, just like what Zouk’s motto is all about: One World. One Music. One Tribe. One Dance. We are constantly evolving and will always be coming up with new music to surprise people.” 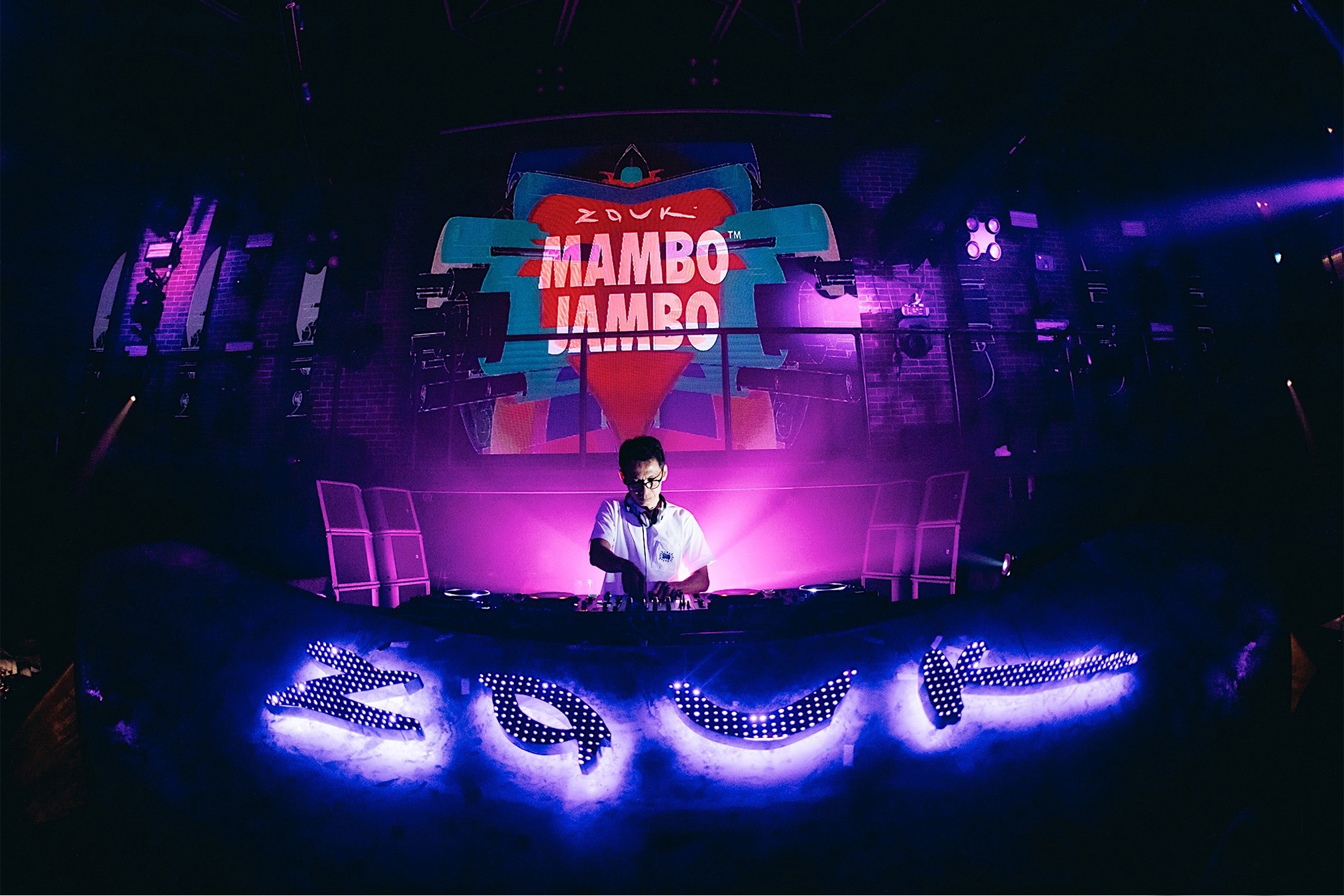 Mambo Jambo embodies one more quality that’s often missing from club culture. There’s no room for bragging rights or pretentious behaviour here. Mambo filters out the chin-strokers and so-called ‘purists’, eliminating the nagging aura of over-seriousness that tends to pervade clubbing. When everyone is doing the Macarena in unison or making butterflies in the air like a collective game of charades, the vibe you feel in the space is one of unabashed joy, and that should really be what partying’s all about.

As long as Singaporean partygoers remember to let their hair down, the spirit of Mambo Jambo is never gonna give them up or let them down – yup, those moves are as literal as you’d imagine.

Follow Zouk Singapore to tune into the next Mambo Jambo digital set.