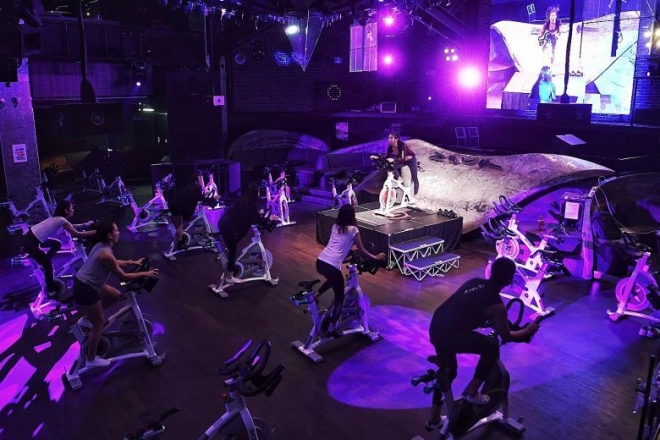 I’ve always likened a spin class workout to a clubbing experience, but sober. Both activities revolve around adrenaline-pumping music and beats, and Zouk in Singapore is combining both experiences into one by lending its light and sound system along with its dance floor to Absolute Cycle, a popular Rhythm Cycling studio that operates not just in Singapore but also in Thailand.

The nightclub's tie-up with the spin studio brand will allow the club to better utilize its space while allowing Absolute to ensure that social distancing is met despite experiencing high demand for classes. Safe distancing rules in Singapore have forced fitness studios to scale back capacity, resulting in significantly smaller studios and classes. Zouk, however, has enough space to accommodate 50 bikes across two floors — and provide a workout experience bar none.

Zouk Group's chief executive Andrew Li told The Sunday Times that classes will run seven days a week. "We have all this space, and the sound system, lighting and smoke machines make for the perfect setting.”

We’re inclined to agree, and actually, it sounds like a dream come true. I promise you, find a spin instructor with a refined taste in music and it will help fill some kind of void...for now.

🔥It's Official!🔥 We are so excited to bring you — Absolute Cycle x Zouk! More details to come! Prepare yourself for a Rhythm Cycling experience like no other...It's gonna be epic! #weareabsolute #absolutecyclesingapore #absoutecyclezouk #zouksingapore #rhythmcycling #partyonabike

A post shared by Absolute Cycle Singapore (@absolutecyclesingapore) on Oct 7, 2020 at 3:00am PDT

Eventually, Zouk hopes to start screening films as well, with plans for themed movie nights four times a week. They are also working on food programming to complement the movie experience.

"You can spin in the afternoon, watch a movie and have dinner all in the same place," Li added. He also hinted that plans to partner with hotels on staycation packages are in the works.

Previously in July, the club had converted its lounge into a dine-in eatery in a bid to adapt to the new normal, at least for now. For additional revenue, they’ve also rented the space to Lazada for live streaming.

Currently, nightclubs, karaoke joints and bars without food in Singapore are in their seventh month of closure and many owners fear that even when they are able to reopen, it will not be as planned if at all.

While small-scale events have allowed for live performances to take place gradually, Mr. Li added that packed dance floors are unlikely to return in the near future.

"We have to keep thinking outside the box, because we don't know how long this will last."

Zouk is a state-of-the-art club located in Clarke Quay and regularly books some of the biggest DJs in the world from Diplo to Sven Väth to The Chainsmokers, and pump anything from EDM to techno to house through a Gary Stewart Audio and L-Acoustics sound system.

Now, if they start booking headlining acts for this experience, this could be ushering in a new era of fitness for music fans in Asia. Not a bad thing to come out of the pandemic...