With less than a month to go until Burning Beach Festival descends upon the sparkling shores of Nusa Dua, turning the coast into a house and techno utopia, we want to round up a few not-to-miss highlights from the team at Mixmag Asia. Yes, we’re going—and this is where you’ll find us…. 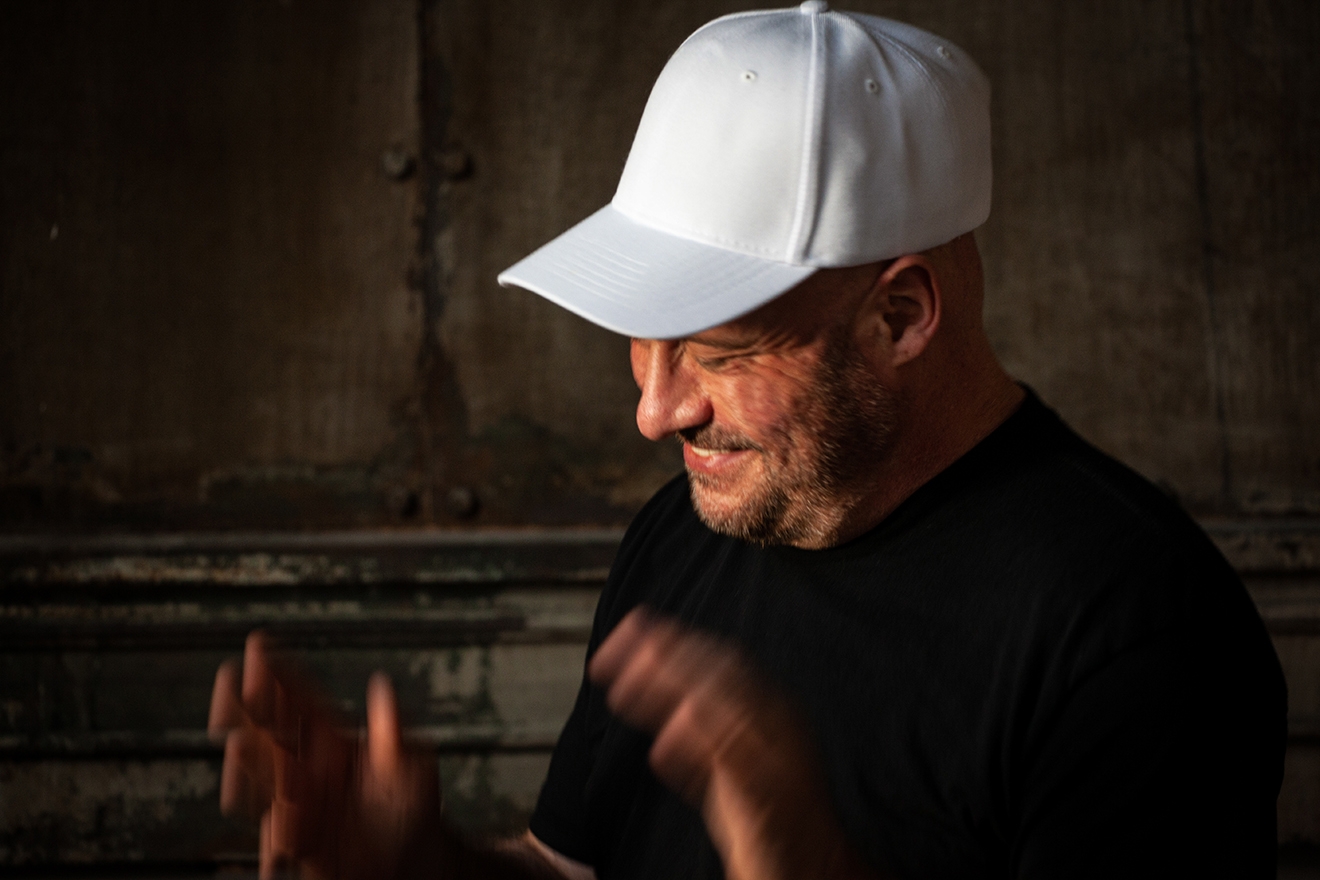 Danny Tenaglia’s long and celebrated career started in New York in the 70s, with his decades-long love affair with dance music beginning in 1979 at Larry Levan’s Paradise Garage. He went on to land a coveted Saturday night residency at NYC’s Twilo nightclub, where he spent much of the 90s before moving his residency to the just-opened superclub Space in Miami and hasn’t stopped since. The New York-born DJ has a couple of Global Underground albums under his belt and over 200 remixes for artists like Madonna, Janet Jackson, Grace Jones, Kim Mazelle, Bette Middler, Cher, Pet Shop Boys and Blondie. Though he’s committed to playing new music, his sets today are rich with nostalgia of the past and are reminiscent of dance music culture in eras gone by—a special, inimitable time. He’s a DJs DJ, with several new artists crediting experiencing a Tenaglia set themselves as their reason for getting into music. Experience it yourself when he lands in Bali… 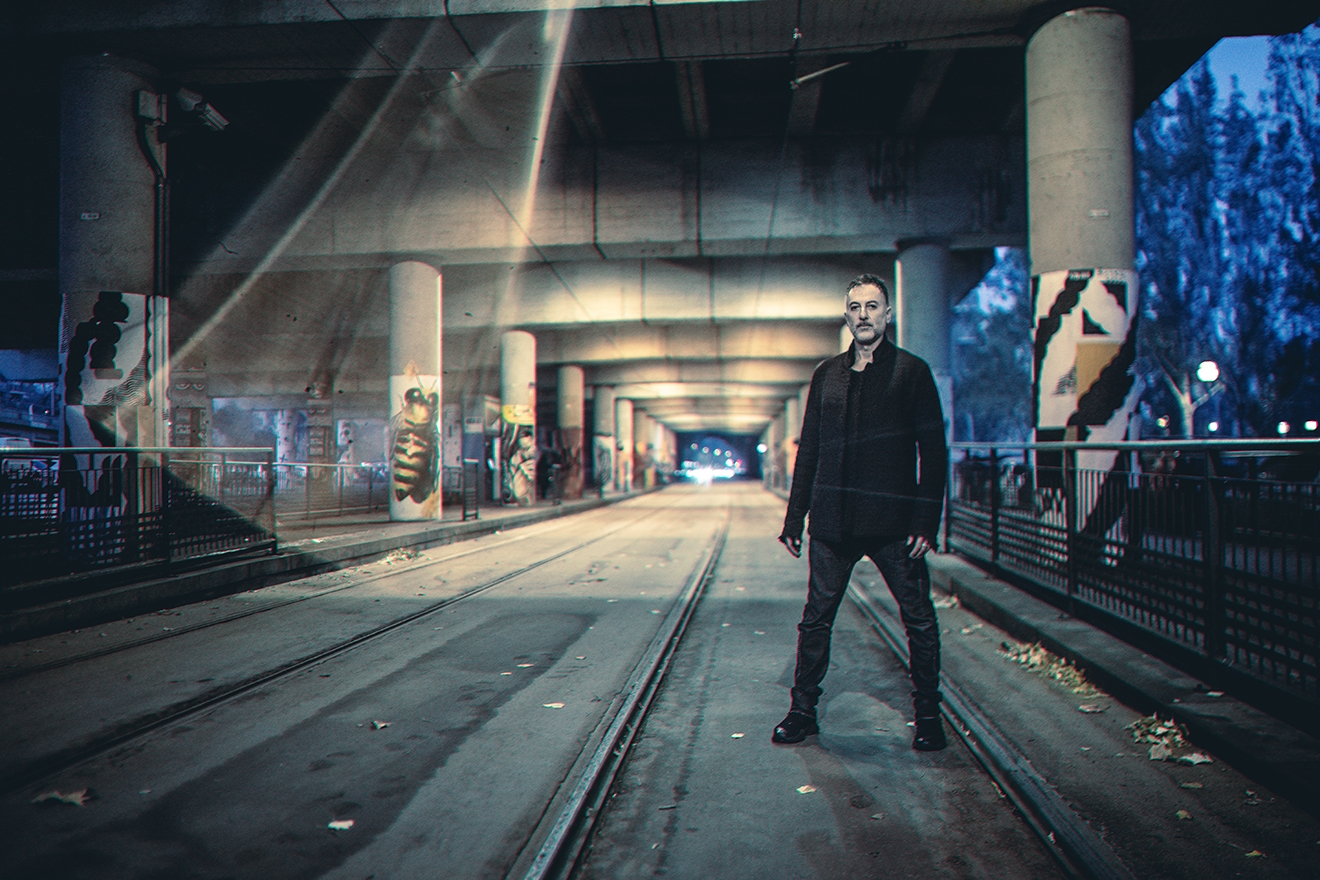 Whether you know him as Dubfire or as one-half of Deep Dish, electronic music icon Ali Shirazinia has been in our hearts for a long time—his career has spanned three decades. For his work as part of progressive house outfit Deep Dish, which kicked off in 1992, the Iranian/American DJ and producer took home two Grammy Awards nominations and one win for best Best Remixed Recording. As a solo artist, his sound leans more towards underground techno and tech house, and his dubfire:live HYBRID show, a rich exploration of audio and visual technology that explores the continued convergence of man and machine, is a masterpiece that indulges music fans worldwide. Dubfire belongs to an echelon of artists that few belong to and is a welcome addition to the bill at Burning Beach Festival. 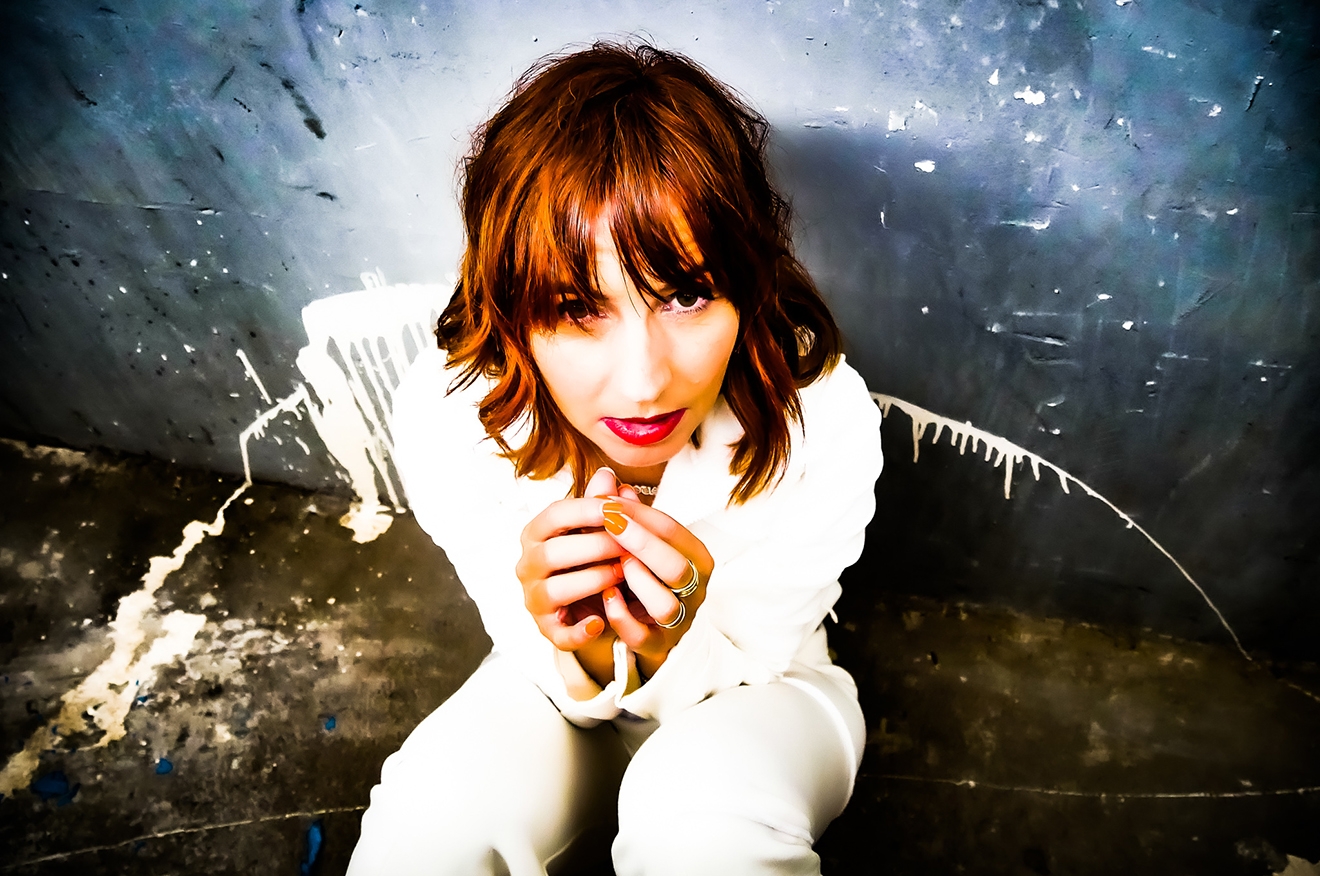 A familiar name in Bali, Anja Schneider is a force to be reckoned with. The DJ, producer, radio broadcaster, label boss, tireless creative force and mentor has made a name for herself as one of the hardest-working figures in the music industry (she was once labeled a perpetual motion machine). The Berlin-based DJ has been at the grind since the early 2000s, and her first label Mobilee helped pave the way for artists like Maya Jane Coles, Solomun and Nicole Moudaber. Today she runs Sous Music alongside over 20 years of broadcasting her ‘Berlin Beats’ radio show, for which she is credited with introducing a generation of Berliners to electronic music since 2000. Growing up in clubs like Tresor in the 90s and inspired by Kraftwerk, The Cure and Depeche Mode, her take on house and techno is sophisticated and will surely cater to those looking for an elevated experience at Burning Beach. 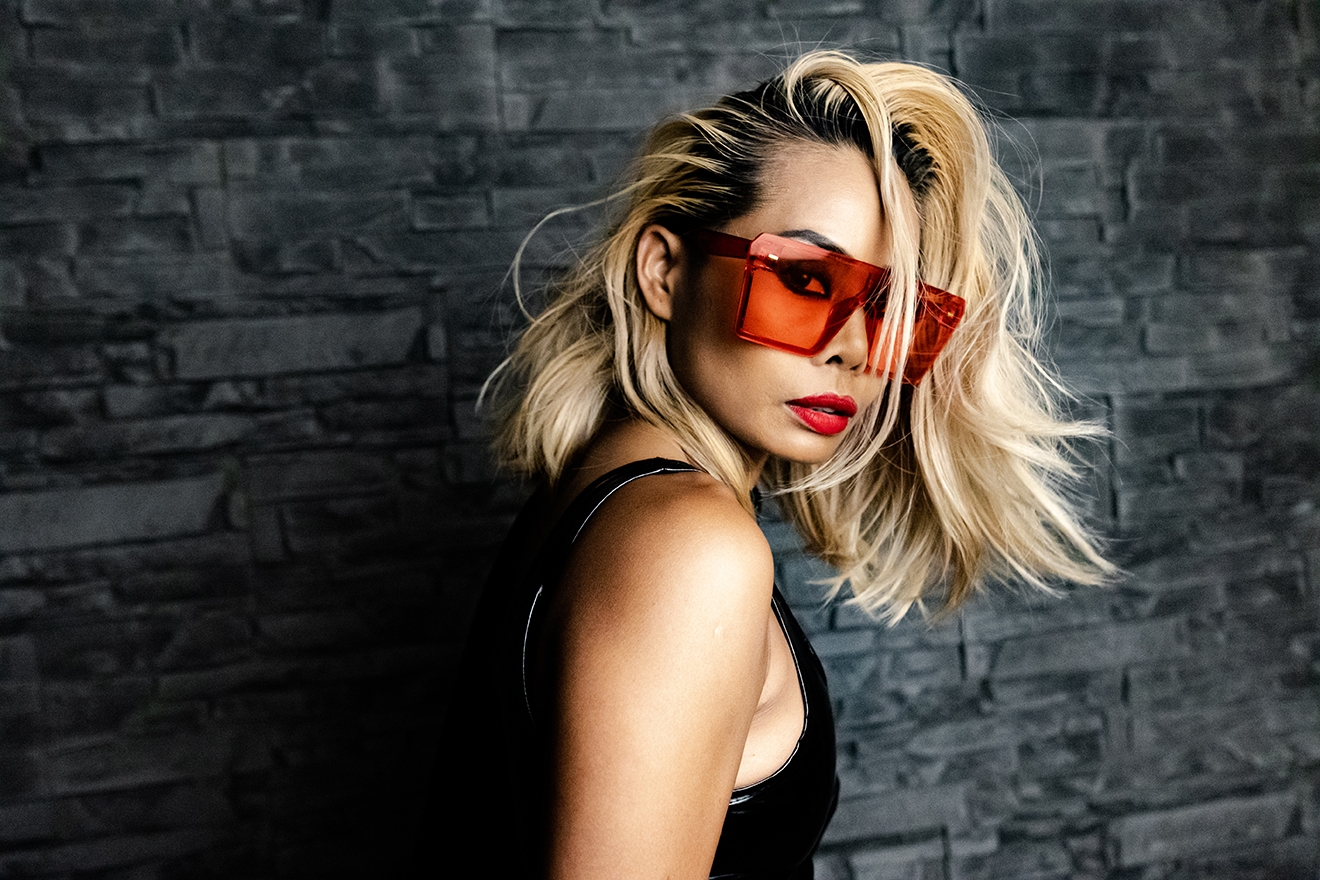 Needing little introduction to the shores of Southeast Asia, Nakadia is a fearless artist who now represents Asia around the world. Her well-documented rags-to-riches story started in rural Thailand before she taught herself to DJ, relocated to Berlin and found fame as a DJ with a good attitude, infectious energy and a stellar playlist. The Thai country girl turned global icon is now credited as a key figure in popularizing techno in EDM-obsessed Thailand, and Nakadia has since has gone on to tour all corners of this planet, playing more than 800 gigs across 54 countries at venues like Watergate, Tomorrowland, Loveparade, and nearly all of Ibiza’s hot spots. Mentored at one time by Sven Väth, Nakadia is now regularly billed alongside artists like Pan-Pot and Carl Cox, and was also featured in Mixmag’s Global Dance Floor doc series. 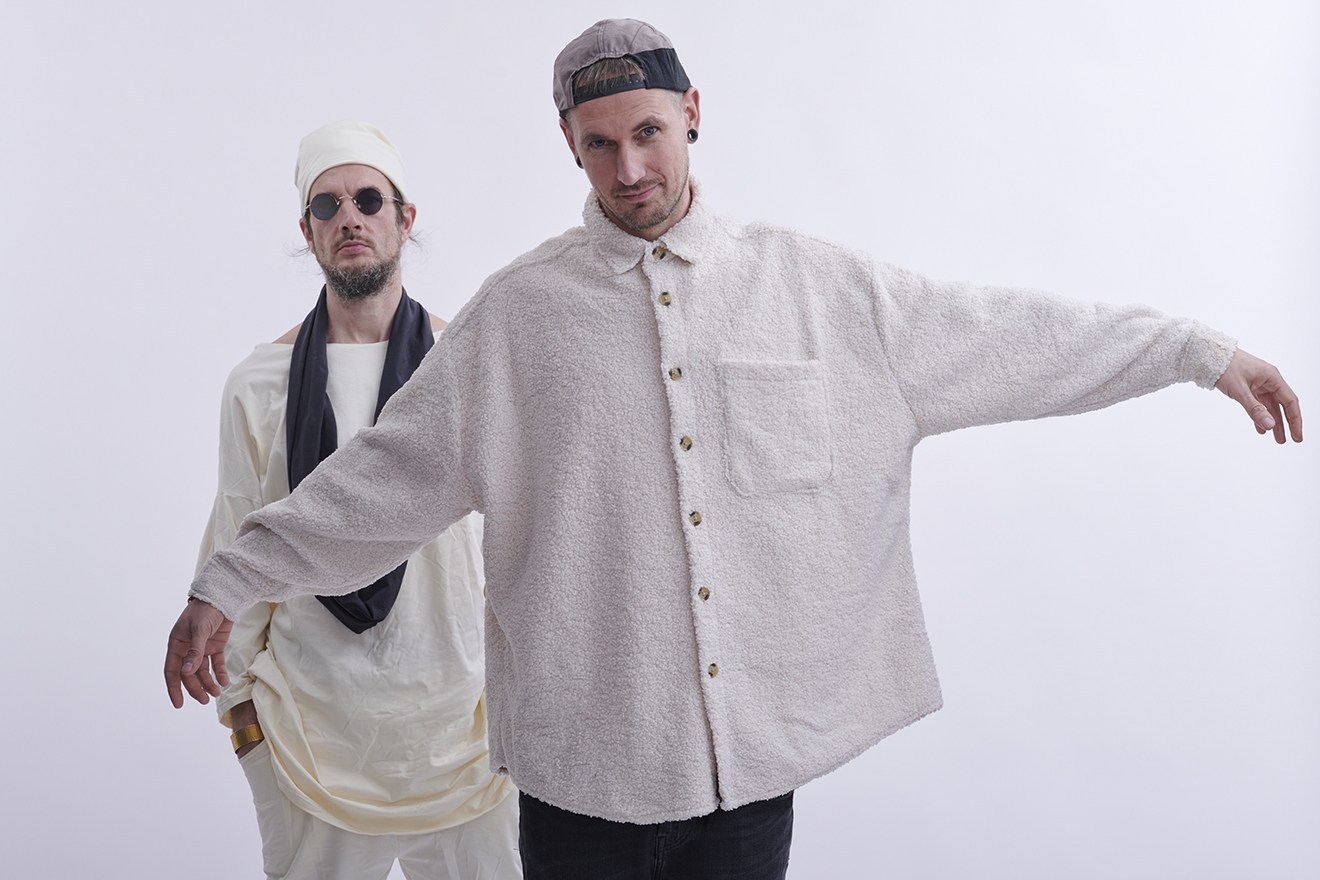 Their bio reads: “Riding in with the power to deliver sunshine to world’s rainiest open-air events, Monkey Safari brings rays of light to whatever dance floors they cast their shimmering spell on”. We're hoping it doesn't rain, but if it does, it doesn't matter because Monkey Safari are playing. We've landed on this alluring German duo's dance floor and their bio rings true; they do indeed brighten even the darkest dance floors with their melodic chords and deep grooves. Falling somewhere between Tulum meets Timewarp, their style of classy, musical house music is for those who like to lose themselves in emotional music that you can feel in your bones. Closely affiliated with artists like BLOND:ISH, Rüfüs Du Sol and Claptone, you've probably danced to one of their remixes, and now is your chance to dance on their actual dance floor... 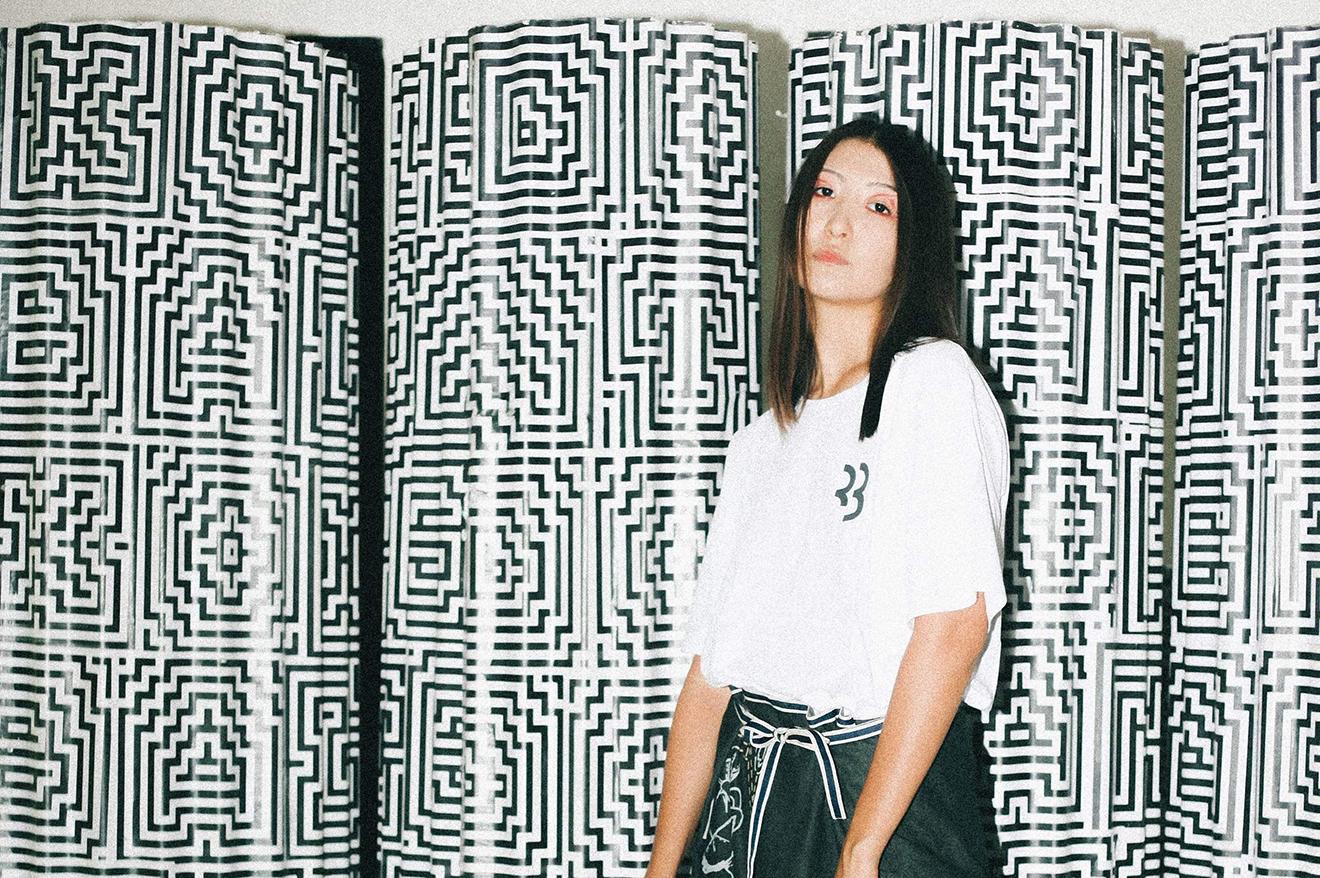 We serendipitously discovered Anelle a little over a year ago, in October of 2021, when she performed as part of a DESØNER showcase on World Mental Health Day. 41 Bali-based DJs played together at Vault in Bali for 38 hours of music straight to raise money for mental health, and just near the end of the stream, Anelle took to the booth alongside her DESØNER club mates. Although there were many great performances that day, the Kazakhstani DJ won us over with her deep, breakbeat-style grooves, and we’re pretty sure the rest of the room was equally taken aback. Since then, she and her partner Karim opened Mejan, an underground industrial-style club on Batu Mejan, and has been making waves around Bali as one to watch ever since. You can catch her there playing weekly or at Burning Beach Festival, and if you haven’t heard her before, we hope you’ll be as enamored as we were… 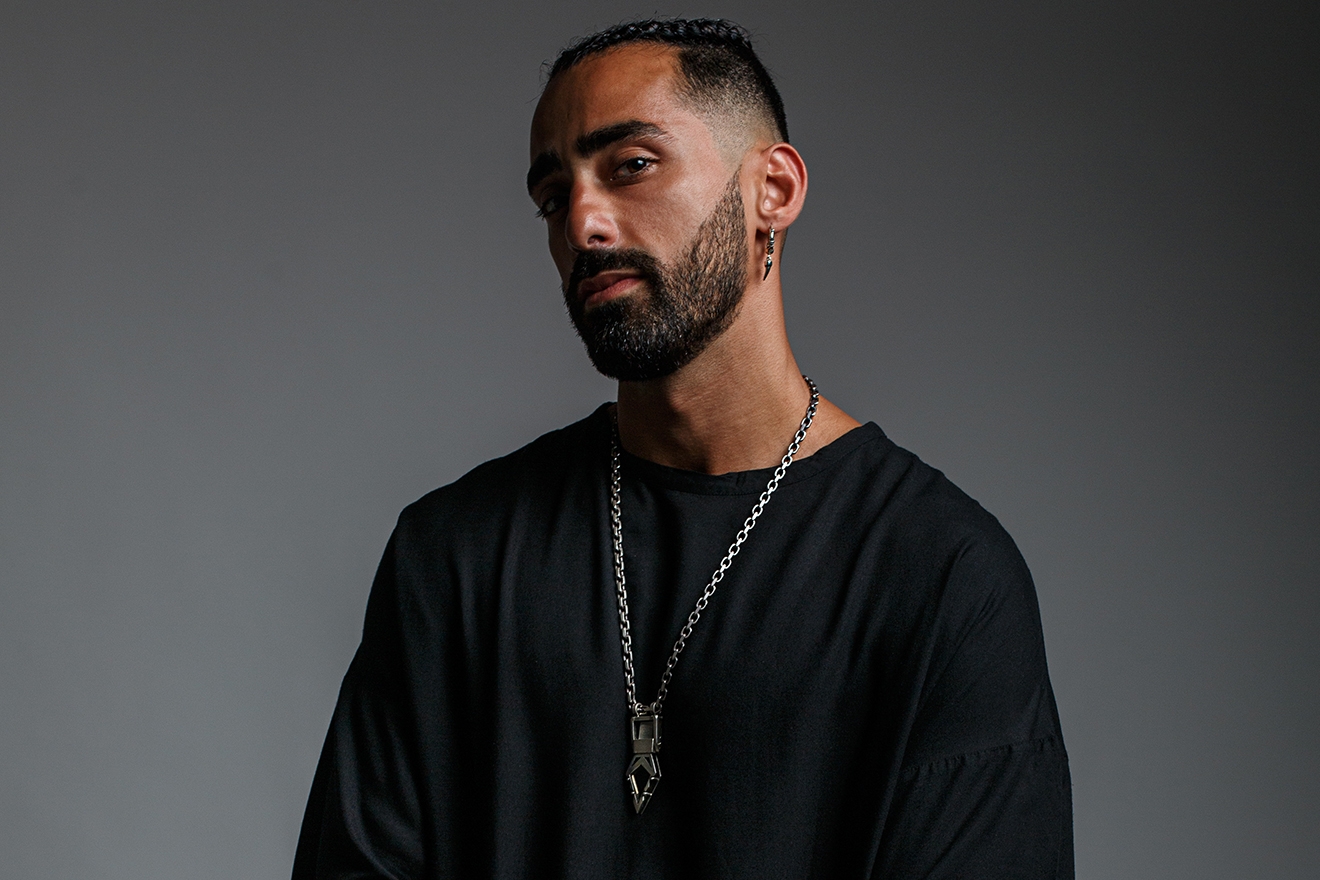 Jazzerimo’s story started in Iran at a time when he could have been locked up for his love of music. He also credits music as saving his life and mental health. Inspired by artists like Carl Cox, Maceo Plex and Deep Dish, he’s since moved to Asia, first Kuala Lumpur and then Bali, and has developed a reputation as an underground weapon. Echoing his life trajectory, he went from playing heavier and harder underground sounds to more uplifting and soulful feeling house music. Jazzerimo is a regular at clubs and events around the island, from the dank corners of Vault to the sun-drenched deck at Savaya, where he looks to create complex and transcendental experiences for those on his dance floors. 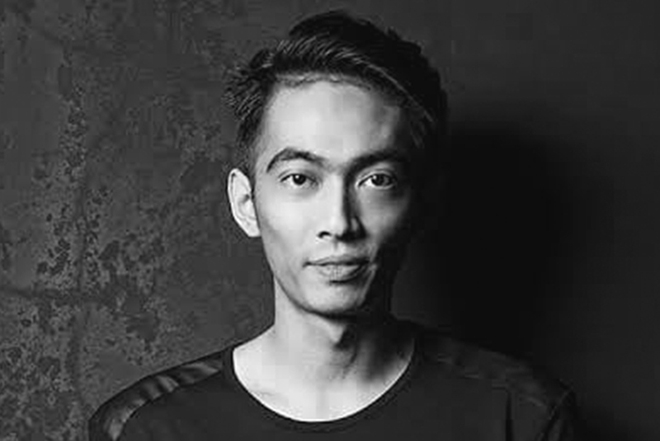 Wisdy is the kind of DJ that everyone loves. You might be new to the Island of the Gods or you might have been raving there since before Canggu was cool, but either way, Wisdy is your flavour. The native Balinese DJ has long been a pillar in nurturing Bali’s nightlife and DJ scene and was a long-standing resident of JENJA whilst also hosting and playing alongside some of the world’s biggest DJs like Âme, Alex Niggemann, Nick Warren, Sasha, Guy Gerber and Damian Lazarus. Whether playing deep underground grooves or tech houses beats, he’s always playing with the planet in mind—Wisdy is a strong proponent of sustainability. Through music, he looks to propagate a harmonious existence—and you can feel that on his dance floor. 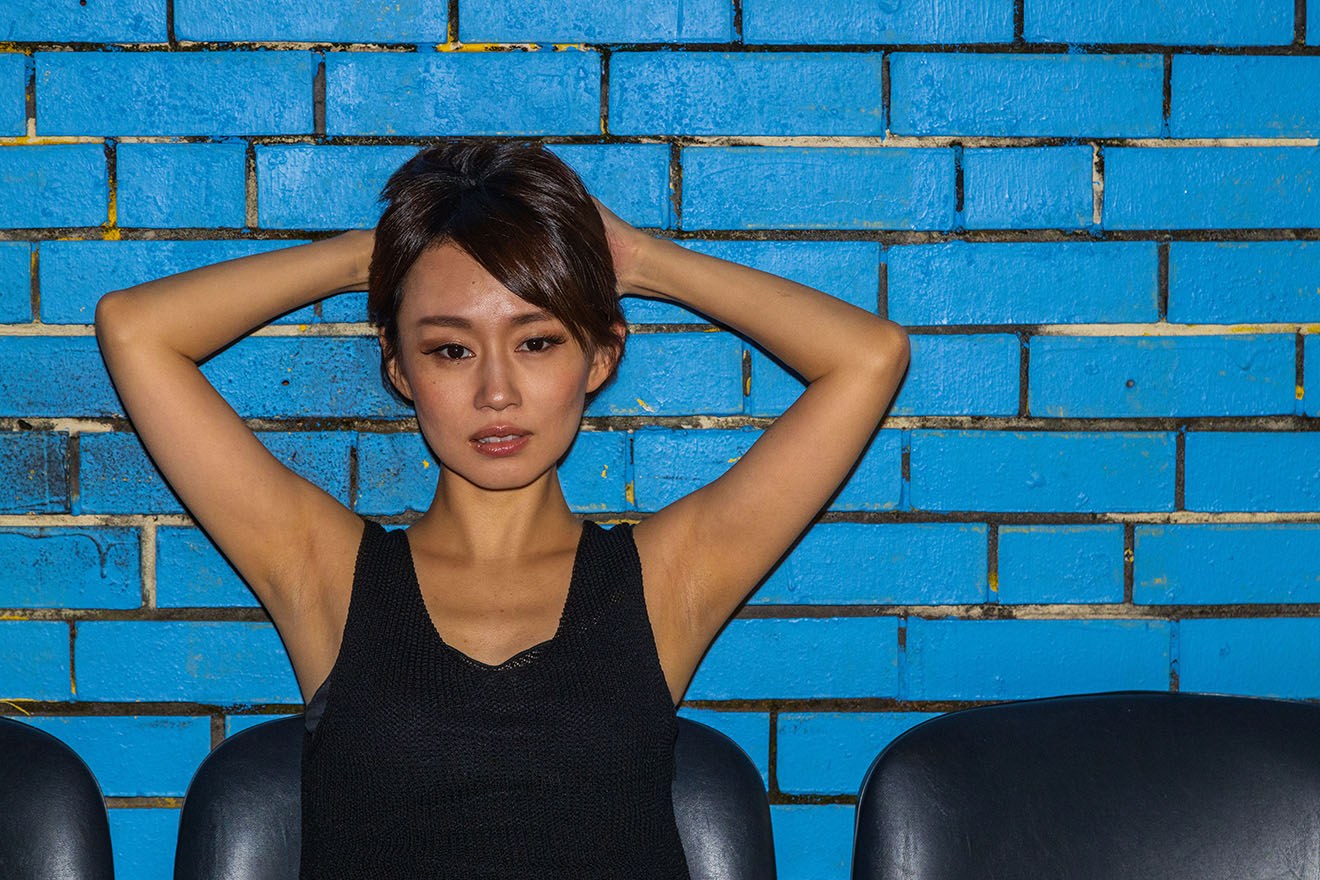 Apsara is an Indonesian-based DJ and producer from Tokyo via San Fransisco who spent years cutting her teeth in underground circles before arriving on our sunny shore. A sangfroid in spades, Apsara effortlessly oscillates between trance, techno and progressive house circles, and when she popped up on our radar as one to watch a couple of years ago, we were immediately smitten and haven't stopped since. We weren't the only ones: she was lauded as a "super talent" by John 00 Fleming, and he continued to make herself memorable by putting her prowess as a performer on full display during her sets at events like Tomorrowland, Djakarta Warehouse Project, Ruby Skye in SF, Avalon in LA, Air in Tokyo and Arkham in Shanghai. But it's her continuous efforts as a producer that have landed her name on labels like Truesounds Music, Desert Heart Black, ZeroThree Music (Toolroom Records) and many more. She also featured on our debut Mixmag Asia SELECTS series with 'Biocat', and with that, we knew she'd never cater to popular trends, making us huge fans for always doing her own thing. 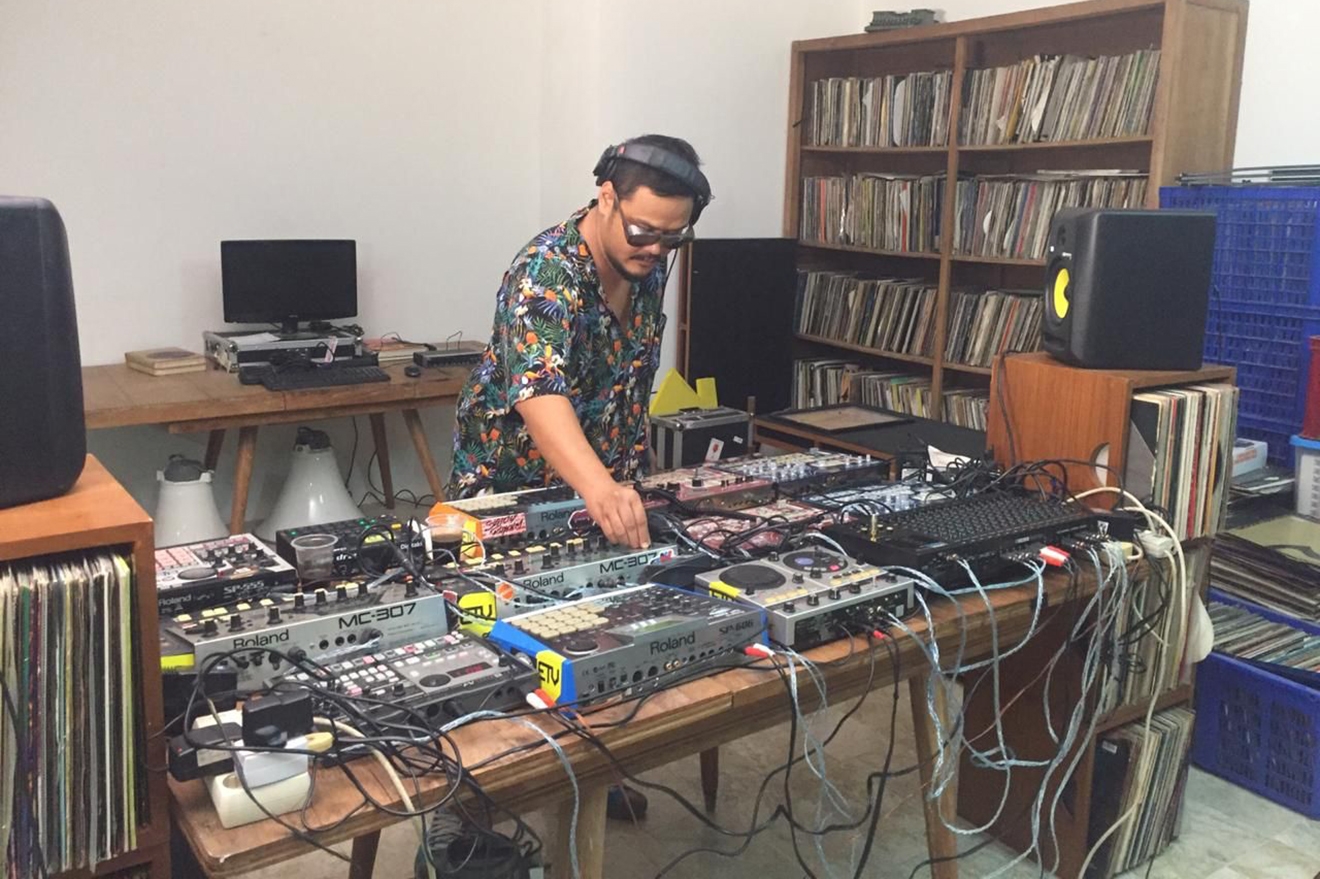 We’re consistently in awe of the caliber of talent that is nurtured within Indonesia, and Latex is the kind of artist that reminds us we don’t always need “headliners”. Master of knobs and conquerer of analog hardware, Latex is known for his unsurpassable live sets that he whips up around Indonesia. Straddling the space between technology, electronic music and science, Latex taught himself to make hardware-only electronic music in the early 2000s and has finely tuned his craft since. His sets, always live but designed for clubs, are a sonic exploration of analog 90s synths, Groovebox sounds and eclectic structures. One show is never enough, so catch him again at Burning Beach Festival, and anywhere he plays really…

Burning Beach Festival takes place from December 16–17 at Canna Bali in Nusa Dua, Bali. Tickets are already on sale here and visit the official website to explore all the add-ons. 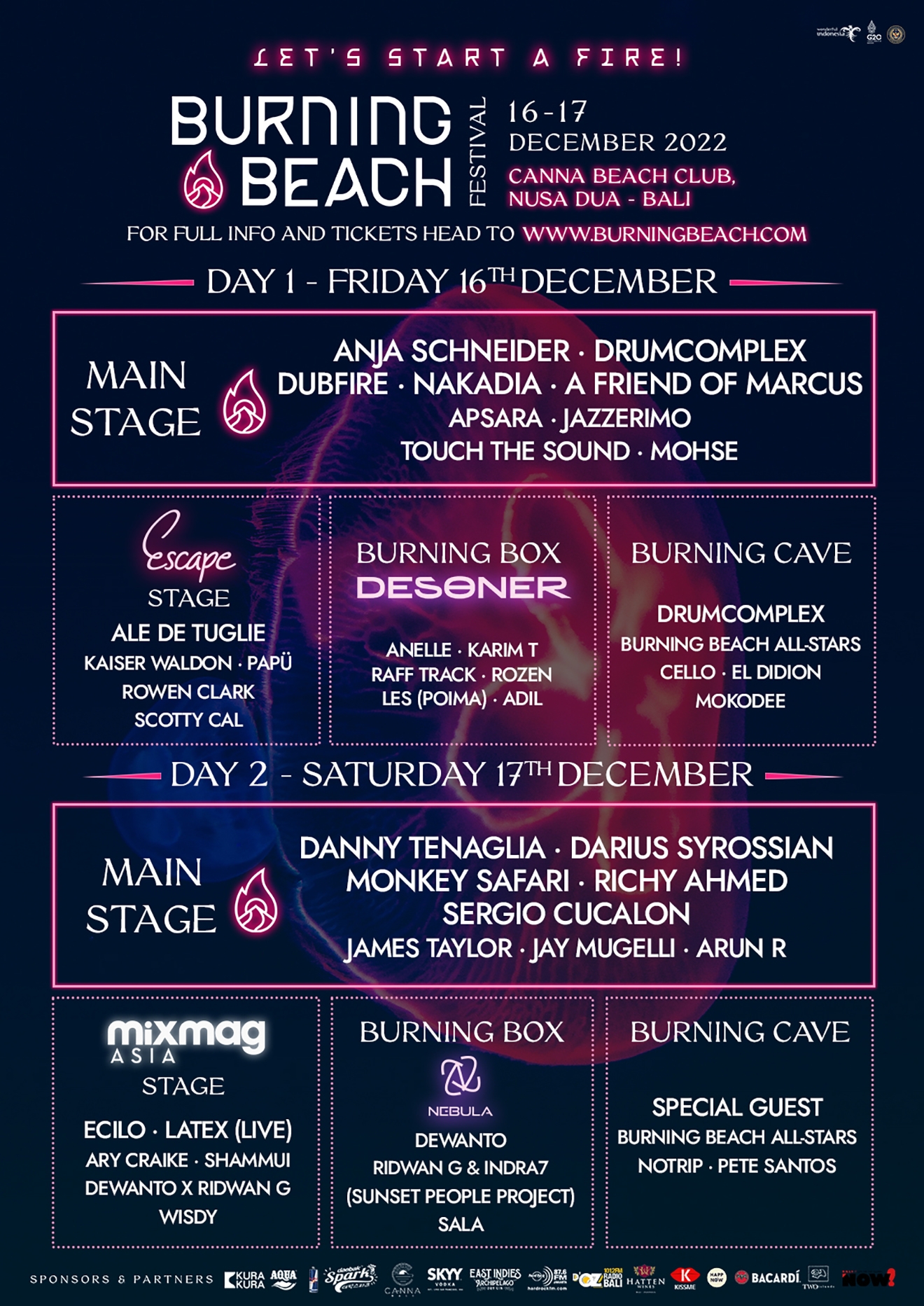