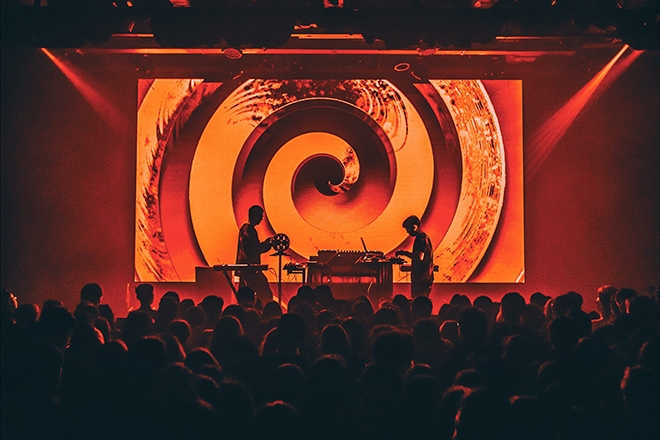 Club Seen is a series by Radii China that shines a light on the artists, VJs and designers who provide a visual dimension to after-hours underground culture in China. Through them, we stumbled upon 35-year-old Miao Jing, a visual artist and animator from Chongqing.

His latest project is called ‘初·ZPTPJ’ and is a “multi-chapter show unveiling the rise and fall of a simulated civilization that reflects our own reality.”

“It questions whether we are a species with amnesia and wonders where humanity is heading at the verge of technological singularity," reads a dsecritoion of the project. "Miao and Jason perform this story as two archivists of records, extracting audiovisual information on the stage. They strive to develop their ‘primal-futuristic’ style of audiovisual language to provide the audience an immersive experience, transporting them to an alternate reality.”

Miao, alongside his collaborator Jason Hou, performs this audiovisual opus live at underground music clubs in China like All in Shanghai, Nu Space in Chengdu and Nuts in Chongqing. They’ve even taken it as far as Gray Area in San Fransisco.

Reviews call the show immersive with dazzling and dense imagery of cityscapes.

Jing grew up on a cotton mill factory community compound in Chongqing and like many in China, could have followed in his parents footsteps but found art through an oil painting he saw at his neighbors one day. His influences and obsessions see the artist regularly exploring themes ranging from ancient creation myths, archeology, simulation theory and more.

The duo want to make the show constantly evolving with new contents and improvements every time. While most plans for 2020 have been thwarted, a 2.0 version of the project is in the works. “We’re working on the creative planning for ZPTPJ 2.0,” he told Radii China. “The rest of the time I’m focused on the creative development of a new project. I’ve invited new partners to join me on this project, they’re based in US. We’re currently in the character design phase, which is both exciting and challenging. Stay tuned!”