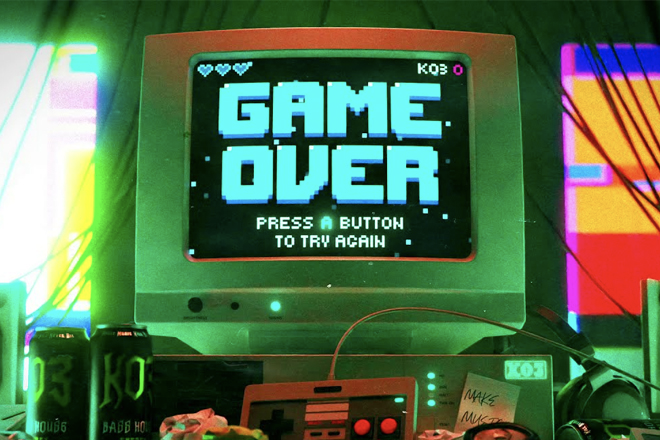 Video games and the many bleeps and bloops that come with them are at the forefront of Japanese producer KO3’s brand new EP, Game Over, which was released this week on Bandcamp.

Seven years ago, when KO3 started making music, his focus was on J-Core and UK Hardcore. In the time between then and now, KO3’s sound has evolved. He’s moved out of his bedroom and into the studio with bigger acts like IVVY, A.B.C-Z, and Kalen Anzia. He’s also expanded his repertoire by producing songs that push the limits of what electronic music is.

Cheekily starting the EP with ‘Game Over,’ KO3 stretches and tweaks an abundance of video game samples into something resembling what your ears would hear on the final level of a game that you’ve played for 35 hours without sleep. It’s hard. It’s showy. And it’s uncompromising.

‘Rollin’’ starts near 150 beats per minute and only goes haywire from there. By the second minute of the song, listers are transported into a dark psytrance-mixed-with-hardcore space that is dizzying to say the least. The final track, ‘Greifer,’ is a little less maximal, and sounds like dancing on the grave of the final boss right as the game comes to an end.

With the success of electronic music in video games or even as one of the main features, like the radio stations in Grand Theft Auto, it’s no surprise that producers like KO3 are making their own soundtracks to the video games in their own minds.

Game Over by KO3 is out on Bandcamp now. Buy the album here.
Load the next article