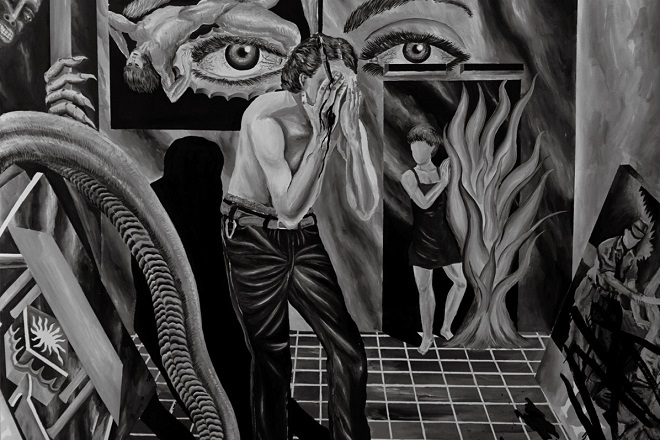 Singaporean three-piece The Observatory have announced the imminent arrival of their 'Demon State' collaboration with Japanese producer, Koichu Shimizu.

The eight-track album partly stems from an improvised studio session captured in early 2020, with the original parts forming “a gradual accumulation of sonic layers... foraged, recycled, and pieced together remotely also from solo bedroom recordings,” including “a historical sample, non-human beats and effects, as well as journals and junk.” Once the skeleton of the music had been captured, Shimizu set about re-arranging and augmenting the recordings from his Japanese base. Meditating on far-reaching themes, including but not limited to “myriads of evil and the origins of totalitarianism; global states of dystopia; the wretched of the earth, and Southeast Asian capitalism,” the proudly abstract work is every bit as engaging as we've come to expect from the protagonists.

'Demon State' is not the first time The Observatory have collaborated with Shimizu, with the players' having worked together in various capacities since the mid-2000s, when the Japanese artists was based in Bangkok. Aside from releasing electronic music on numerous highly regarded international labels, Koichi Shimizu has a long-standing working relationship with celebrated Thai film director, Apichatpong Weearsethakul, for whom he's scored film and theatre soundtracks since as far back as 2015. The Observatory, meanwhile, formed in Singapore in 2001 and have since released a genre-defying body of work that's skilfully surfed styles from folk electronica to prog and avant-rock. Following the 2018 departure of co-founders Leslie Low and Vivian Wang, they continue to fly the flag with the current line-up of multi-instrumentalists Cheryl Ong, Dharma and Yuen Chee Wai.

You can listen to the first track from the album, 'Panopticism', below:

'Demon State' by The Observatory and Koichi Shimizu is out September 23 on Midnight Shift. You can pre-order it here or via the player above