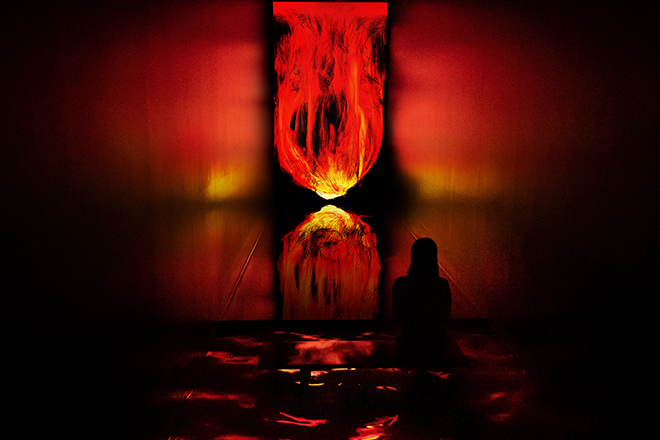 Quite the opposite to tumbling water, the new artwork was inspired by flames, which is a phenomenon of light and heat generated by combustion.

“We perceive the flame, which is a sensory experience, as if it were an object and sometimes even feel life in the flames,” as per a description.

The volcanic eruption like bright red and yellow flames is influenced by human presence, like other teamLab artworks. When a person steps onto the floor panel, the shape of the flames changes to create a “black absolute presence” behind one’s feet.

Hideaki Takehashi is the man behind the sound design of the exhibition. Other than working on a lot of previous teamLab Interactive Installations such as A Musical Wall where Little People Live and Sound of Life in 2017, Light Chords in 2016, he also soundtracked Ghost In The Shell: The Movie Virtual Reality Diver 2016.

The monolith is located outside teamLab museum Tokyo as a permanent installation and it’s free for every visitor to see. Head to their website for more information.

Not in Tokyo? You can still use their new TikTok filter to see flowers bloom wherever you are in the world.