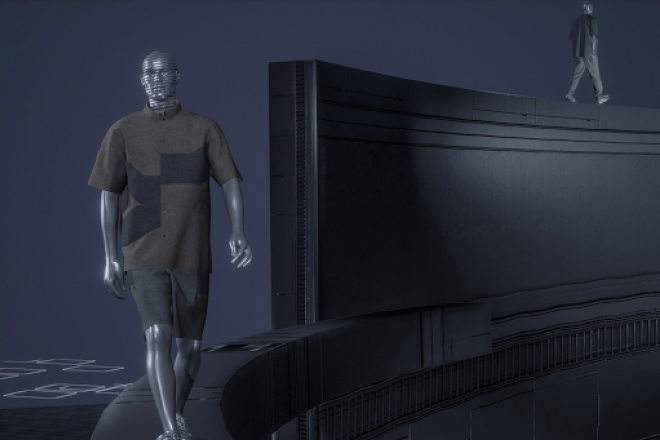 The result: oqLiq has created a 3D maze that is just like the anarchy of the virtual world. When the 3D models show the pieces in the collection, the camera angle switches from one side to another, where they are shown wearing another garment, altogether creating a 3D space that simulates things happening at the same time in a parallel world.

“Inside the virtual world, every hyperlink has invisible violence," the brand explained the concept behind it in a statement. "However, DELETE cannot transcend, only through empathy. In the two-dimensional world, there is a place to store grief in the gap between the shoulder blades and the muscles. Everyone who is strong has a spike that cannot be stored there. It is about sad.”

"The Book of Changes contains information about the coordinates of different time-space slices of the parallel universe. Each Yao (爻: line) presents the changes that occurred under other choices. Parallelism can be the same plane or three-dimensional geometry. And a slice produces yin and yang, which is Tai Chi. However, each human choice has its own aura and diffusion, just like an ink painting. It can be a three-dimensional all-around diffusion. It's also an extension of the attached concept, such as the cybernetic pocket to a garment. In the end, we must destroy to produce deconstruction."

In addition, the brand presented a new fabric technology — the garments were made with recycled materials like yarn mixed with oyster shell powder, and leather coated with dam sediment mud. The fabric choice is aligned with the tai chi concept of longevity with moisture-transferring and quick-drying functions, altogether working towards creating a sustainable fashion future. The concept was also recognised by the Red Dot and IF design awards.

Watch the show below: