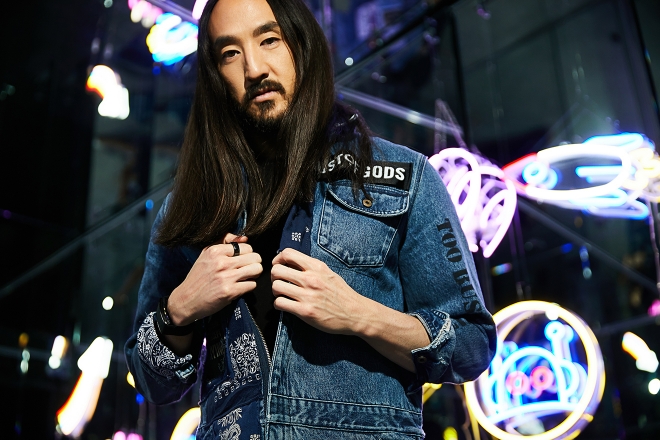 Steve Aoki is a man who needs no introduction here. But just in case any of you are new to the dance music world, Aoki is a DJ, producer, music executive, philanthropist, and one of the undisputed stars of international EDM. His phenomenal success has led him to work with artists from far beyond dance confines, and well into the realms of chart-busting pop mega-stardom. From will.i.am to Linkin Park, Backstreet Boys to Lil' Jon, his list of collaborators reads like a who's who of contemporary pop.

The Dim Mak founder's tireless work ethic has seen him release a near-constant stream of big room dance hits. His latest effort sees him join forces with Timmy Trumpet and STARX to repurpose one of the most iconic guitar tracks of the last century. Dick Dale's 1962 version of 'Misirlou' is an American surf rock classic. The music was, in fact, based upon an Eastern Mediterranean folk song of unknown origin which had been popular with Arabic, Greek, and Jewish musicians since at least the 1920s. Fast forward to 1994, and Dick Dale's version was used by Quentin Tarantino as part of the cult soundtrack to his seminal Pulp Fiction movie, arguably the film that cemented his reputation as one of the most provocative and stylish directors in the world of cinema. This inclusion popularised the track with an entirely new audience, reigniting its classic status.

Steve Aoki has previously spoken of his admiration for Tarantino's carefully curated soundtracks, saying “when you think about Quentin Tarantino and the feel of his movies, you immediately think of the soundtracks too.” Now he's taken his appreciation a step further by naming a track after him, offering up a main room EDM take on the distinctive melodies of 'Misirlou'.

'Tarantino' is not for the faint-hearted. Like the work of the director himself, the track is edgy and designed to set pulses racing. The unforgettable riff is played by Timmy Trumpet (on his trumpet, of course) before morphing into a bastard poly synth lead. The drums are hard and fast, and the syncopated bass pumps like crazy to further increase the energy levels. If that wasn't enough, the MC occasionally interjects to remind everybody to jump. In fact, I'm starting to sweat just thinking about it, so I'll invite you to turn it up loud and take a listen for yourselves.

Steve Aoki, Timmy Trumpet and STARX 'Tarantino' is out September 30. You can buy it here