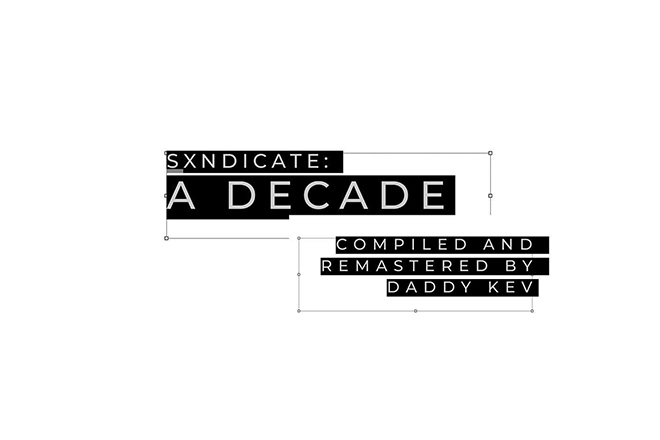 Known for being a transmitter of beats and visual culture, Syndicate are a revolutionary driving force of underground music in Singapore. This month they are celebrating their 10th anniversary with a digital drop: a compilation album is called ‘Sxndicate: A Decade’ that features 11 tracks from Syndicate’s roster of homegrown artists like .gif, Kiat, Intriguant, Cherry Chan, blankverse, Vandetta and more. The selections span the last 10 years and were curated and remastered by hip-hop and electronic producer Daddy Kev of 'Low End Theory' fame.

Despite uncertain times, the collective decided to push through with the celebration. “Having a ten year anniversary in this surreal times wasn't something none of us could have imagined,” they said in an Instagram post. “However, it allowed us the time to look back into the last decade before we move things on.”

Syndicate has released two previous records this year. The first being .gif’s sophomore album ‘Hail Nothing’ and turntablist Koflow’s album ‘Metem’. Intriguant is slated to release ‘Spirits’ next month.

Over the past decade, Syndicate has become known for gathering different artists to create one platform for artistic expressions. Founder Kiat is a key player in the underground scene in Singapore, having become a resident at Zouk at the age of 20 before being signed to Goldie’s Metalheadz label. He founded the collective alongside Cherry Chan, who is also behind the very first female DJs collective in Singapore and the FFF DJ Bootcamp, and together they aim to synergise live performances with audio-visual installations so to change the mainstream music scene.

Fast forward to today and Syndicate has evolved into an experimental platform for local artists that has had a positive ripple effect on pushing the boundaries of the local music community by opening it the underground scene in a way the more people can experience it. Undoubtedly, they’ve added unique and independent elements to Singapore's existing clubbing culture.

SXNDICATE: A Decade was released on October 6 and can be streamed for free on Bandcamp or purchased for SGD$7. Preview it below: