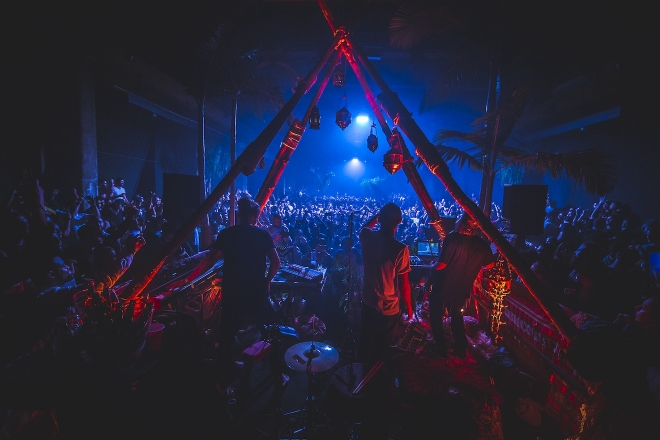 The landscape of underground electronic music in the Arab world is in a rapidly changing period of its development. Festival controversies, funding, paradigm shifts and politics have often taken centre stage here, but at the root of it all are artists that want their music to be heard. German-Syrian live electronica act Shkoon has been making its own moves step by step with a goal to help change the face of underground music from the Arab region. Their background positions them to be bridge builders between modern club culture and traditions of the Middle East and the driving force behind their ambition is their music.

The duo is composed of Ameen, a former Syrian refugee who resides in Germany, and Thorben who is of German descent and a Hamburg local. Since 2015, Shkoon have been breaking boundaries in part to their dreamy and eclectic productions, ethereal track selections and live performances. Following their album debut in 2019, Shkoon have been taking huge strides in bridging the gap they see in the scenes between Germany and the middle east. The duo were able to tour in support of their album and played sold-out shows in Beirut, Paris, London, Hamburg and Berlin. Unfortunately, many show opportunities could not come to fruition due to Ameen's status as a refugee. Rather than being discouraged, the duo used this as motivation to further connect with audiences across the globe. With a message of cultural diversity at its roots, Shkoon are known for taking inspiration from their respective backgrounds, using Syrian folklore in writing lyrics in Arabic and producing in the electronic music formats associated with western culture.

Naturally, when they were approached to reimagine one of Arab pop's most widely regarded classics in the 1986 single 'Ya Rayt' by Ragheb Alama, they were over the moon. Coming on March 11 2022, the single will be released through newly formed record label WTR, which aims to be a home for arabesque organic electronic music. The duo provides a stunning revisioning of the original that takes inspiration and influence from a vast range of sources while staying true to their direction of electronica. The record is dark and deep, in a sleek and newly polished format, removing much of Ragheb's original vocals and replacing them with a more contemporary version. This contrast creates a refined distinction between the new and the old, allowing the new version to work as a celebration of cultural diversity, modernity, change and also authenticity.

In speaking about the importance of this record, Shkoon remarked:

“It was always part of our vision to build bridges between traditional Middle Eastern music and modern electronica. Raghab has been a hugely important artist in the Arabic Pop world for over forty years so when we were approached to remix Ya Rayt it seemed like a natural fit. The opportunity to fuse club culture with more conventional sounds is incredibly exciting for us, as it facilitates a cultural dialogue between generations.”