Pictured above are Wukir Suryadi and Rully Shabara, who make up Senyawa. Senyawa is a household name in the neighbourhood of Indonesia’s contemporary experimental scene. The duo takes the spiritual and sonic traditions of Javanese music and yanks it confidently towards and beyond the vague edges of experimental music production. “It’s hard to describe our music. When we talk about it we don’t use the word genre. We tend to avoid explaining our music with a genre or specific category,” explains Rully, the unassuming, inventive vocalist of the group explains in a VICE documentary.

While most artists boast the ability to transcend genre, Rully Shabara is simply being accurate. Rully’s vocal techniques are informed by the incantory, tribal rhythms of ancient Indonesian rituals. He brings throat singing to the upcoming album ‘Alkisah’. Wukir Suryadi is responsible for the instrumental performances of Senyawa. He plays handmade instruments, instilling and asserting the primitive, raw, unadulterated sounds of Indonesian ritualistic trance into Senyawa’s music. He brings performances on homemade bamboo instruments to the upcoming album ‘Alkisah’. 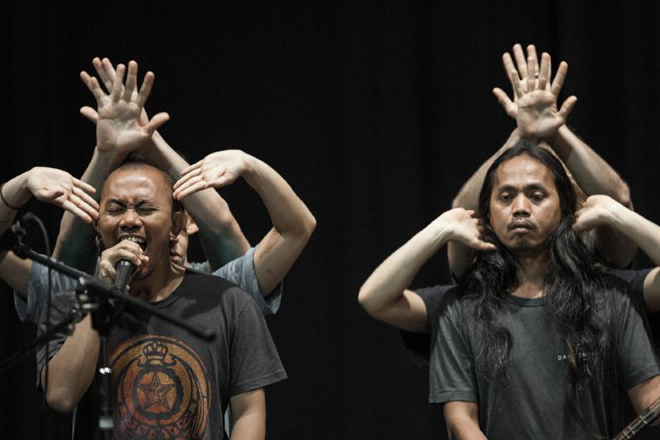 "Indonesian music has always been a way to communicate with gods, nature and the other worlds,” Rully Shbara said in a Resident Advisor piece from last year. “It's about moving beyond the material world and entering the spiritual world. When you're performing, you're transcending, you're forgetting the arrangements, composition and just feeling it.”

Earlier this year in July, the group released ‘Bima Sakti’, a collaborative LP with Stephen O’Malley (co-founder of drone metal band Sunn O)))). ‘Alkisah’ is what follows: an 8-track LP (the duo’s seventh album), to be released on Phantom Limb, a record label based in Brighton. The coming of the album on February 19, 2021 will mark the tenth year since Senyawa’s formation. The album will also be co-released by a long list of independent record labels across the world, each with different packaging and with different versions/remixes of tracks by other artists. That’s… pretty avant-garde, too.

View the music video of ‘Istana’, the first track of the upcoming album, and prepare yourself mentally for the release by studying the track list below.