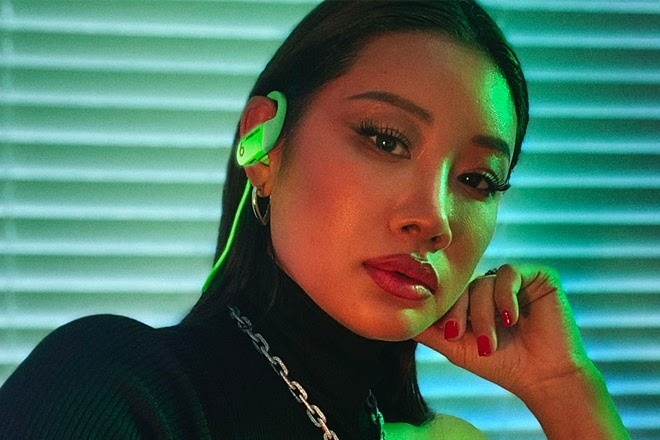 The synergy between Tokyo-based fashion label Ambush and musical heavyweight Beats has cast a luminous green glow all over the headphone industry since they launched glow in the dark Powerbeats neckband earbuds on the Apple web store November 18.

Inspired by Tokyo’s vibrant nightlife and trying to capture the same energy of a city that never sleeps, AMBUSH’s creative director Yoon Anh hopes the headphones lift people up in these dark times. Originally slated to debut during the 2020 Summer Olympics, Yoon wanted to pay homage to Shibuya, Tokyo’s shopping district for youth that is open 24/7. Yoon’s idea is that once anyone puts on the glow in the dark Powerbeats at night, they become part of the city.

The main difference between this headphone and the regular version is the glow in the dark capability. The earbuds and the neckband glow bright green after dark, but appear more of a minty green color under daylight. Also, it offers 15-hour battery life, IPX4 sweat resistance, seamless pairing with Apple’s H1 chip and hands-free voice commands. AMBUSH’s branding is also stamped onto the headphone and comes with a branded ripstop pouch to store the headphones. Most importantly, the headphones reflect that Yoon believes anyone can glow from within.

These edgy headphones will definitely get a lot of people staring in amazement, especially when nightime hits and they glow in the dark.

[Via Beats by Dre]