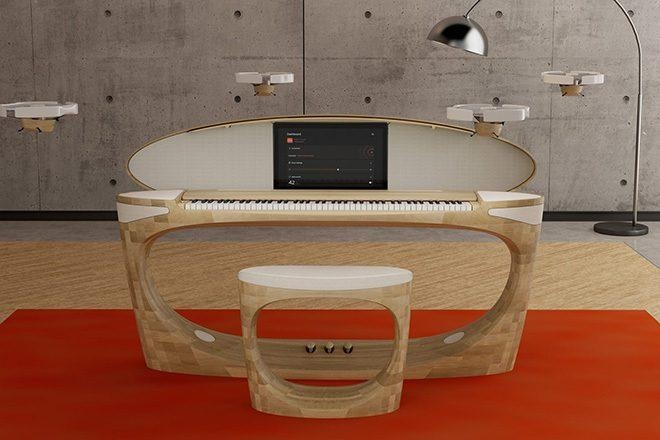 Roland has revealed its 50th anniversary concept... a piano with flying speakers.

Built from one piece of Japanese oak, the piano was revealed at Roland’s CES 2023 exhibit in Las Vegas.

Set to “hoover over the piano” speakers have been set on drones as the team behind this design aimed for a “360-degree experience”.

Read this next: Theo Parrish and !K7 release new short film exploring the sound of Detroit

On the piano, there are 14 general 360-degree speakers which Takahiro Murai, General Manager of Roland’s Keyboard Instruments Development Department says in a statement, “can recreate a three-dimensional sound space not achievable with conventional stereo speaker systems found on digital pianos.”

He adds: “The idea is that if you put speakers in any direction, you can create any sound field depending on the settings.”

To boost the immersive sound experience, Roland combined the technology from its already-made PureAcoustic Ambience with remote-control drones.

Read this next: 9 dance tracks that wouldn't be the same without the TR-909

“The biggest challenge for us is latency,” Murai explains about the drones. “Normal Bluetooth is 200ms, which is unusable for musical performance.”

“This technology was originally created for wireless headphones,” adds Murai, “but it got diverted to this project.”

Therefore Murai worked with drone speaker developer Masaaki Matsuba on the issues which have resulted in the drones still being “somewhat noisy” however they are planning to keep updating the system whilst more technology becomes available.

Roland were initially inspired by Erik Satie’s idea of “Furniture Music" which they say resulted in a "beloved piece of musical furniture with which one can’t help but engage."

Watch a clip from Roland’s CES 2023 exhibit of the concept piano below.