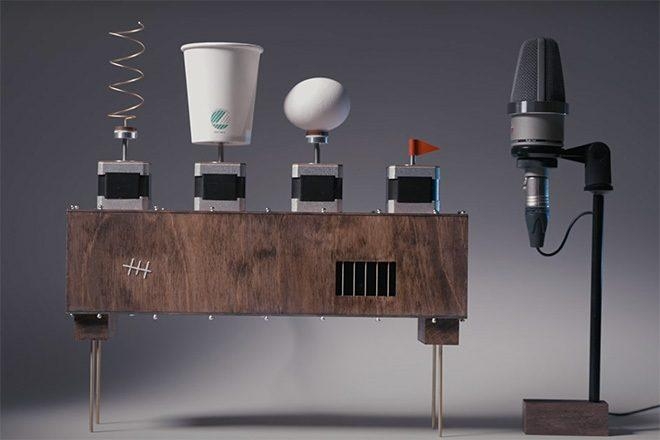 A polyphonic synthesiser named the Drone Box No.1 transforms everyday objects into music.

Created by composer and artist Koka Nikoladze, the new tech forms music from objects such as a pinecone, a spring, a paper cup and an egg.

The four-voiced synth generates sound from the turning of the stepper motors which change the characteristics of the sound depending on the object.

Read this next: Korean artists create device that generates music from plastic waste

Nikoladze states: “Selecting and attaching the objects is like physical mixing.

“A pinecone adds rich buzz and makes the sound more like a square wave synthesiser, an egg doesn't do much and leaves the work to the box, a paper cup makes the sound rounder and a brass coil provides resonant overtones. I exchange objects all the time.”

You can use a MIDI from a keyboard to a computer to control the sound as well as the device allowing users the option of pitch bending, vibrato and tremolo with more options still to come.

Read this next: Cut your very own 5” vinyl records with the new PO-80 Record Factory

The next version Nikoladze says will have a “single button on the side, so you can create a playlist of MIDI files on a SD card” so you can “play music during your morning coffee, just like with any music player. I’ll design more drone boxes.”

Listen to the sounds created by pairing objects and Nikoladze’s Drone Box No.1 together below.