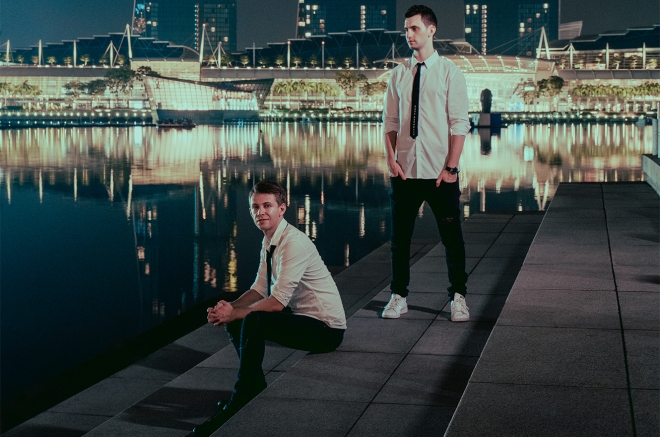 Singapore-based big-room duo Rave Republic have released a new single, and this one is designed to spark up one of life's most contentious debates: whether or not pineapple has any rightful role as a topping for your pizza.

Known for their crowd-rocking music and playful antics, Rave Republic are comprised of band-members Matthias and Stas, and since forming in 2014 they've gone on to build a formidable following throughout Asia and into the rest of the world. The pair regularly headline festivals all over the earth, including Ultra, S20, and Electric Daisy Carnival, and are proud members of the DJ Mag top 100 DJ's. Here, though, we find them in existential mood, as they pose what some would consider to be one of life's more perplexing questions

Now, speaking as someone of Italian extraction, I can say categorically that pineapple shouldn't occupy space anywhere near a pizza. However, if life has taught me anything, it's that one man or woman's opinion only carries so much weight, and just because I believe or even know something to be true, doesn't mean the rest of the planet is likely to agree with me. So enter Rave Republic to pitch what they refer to as “life's biggest question” to the party people of the world. The pair themselves have so far remained tight-lipped over their personal opinions on this most pressing of matters, so we can only speculate as to their preferences.

As for the music itself, the track sees them team up with Sammy Boyle to turn out unapologetically slamming EDM stadium banger. Leviathan synth stabs and throbbing beats build and drop over three or so minutes of adrenaline-fuelled dance-floor mayhem. Regarding their big question, I'm still attempting to digest any subliminal answers that may or may not be contained within the music, but either way, I've already said my piece on the matter, and there's little chance of me altering my opinion. For whatever it's worth.

NEW MUSIC OUT FRIDAY! Are you TEAM PINEAPPLE👇? 🍍🍍🍍🍕🍕🍕 Spurred on by life's biggest question about whether pizza belongs on pineapple, we have teamed up with @sammyboylemusic (rumour has it he's the husband of Susan Boyle) for a song as addictive as pizza itself. One of the most trending tracks in the world on 1001tracklists over the past few weeks, and supported by some of the biggest names in music, we can't wait for you to have a listen!

Rave Republic and Danny Sammy Boyle 'Pineapple Pizza' is out now. You can buy it here