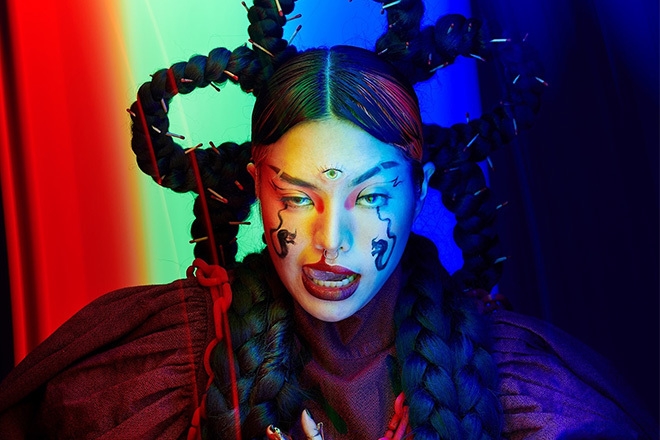 Taking her hometown as the topical base for her latest creative output, Pyra releases ‘bangkok’ — the third single ahead of her anticipated full-length album. The single is fuelled with meaning for the new generation that’s fighting currently for justice in the country's capital.

Her first two singles ‘plastic world’ and ‘dystopia’ that she dropped earlier this year have been riding the wave of awakening from listeners and followers which have now grown extensively outside of her domain of Thailand, just like she intended.

This third single is a musical dedication to the Thai people who are fighting for their rights — the inclusion of her rap sensibilities over beat-heavy production draws in unique Thai-infused sounds which create an ambiance that's both empowering and enlightening.

Pyra is the only Thai artist who’s performed at Burning Man, but beyond that giant step, she’s been touring Asia (pre-pandemic, of course) and has effortlessly garnered mounds of respect through new followers and admirers of her alternative outlook and the inclusive messages to the world through her music.

‘bangkok’ is an opportunity for everyone according to Pyra, and the video she’s released shows exactly that — she’s included Ammy The Bottom Blues, Hockhacker and Headache Stencil, a stencil artist who she likes to collaborate with and has been immersed in the current political activity that’s been highlighted in Bangkok of recent.

Check out the video for Pyra ‘bangkok’ below while we wait for the announcement of her highly anticipated game-changing album.