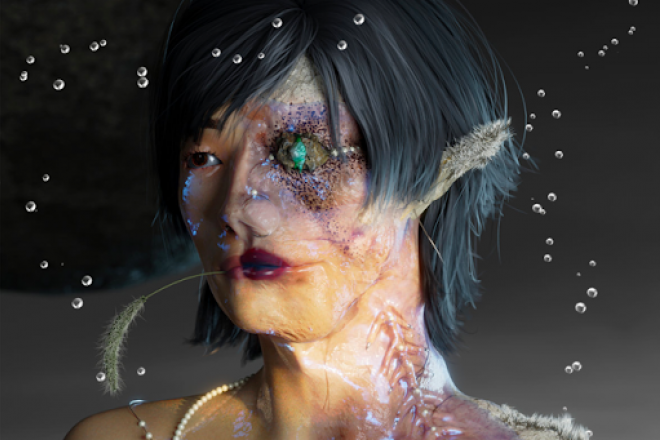 Tokyo based producer Prettybwoy is releasing his debut album on September 17 called Tayutau on SVBKVLT. The artist’s latest release was a single called 'Centrifugal' for the Shanghai label’s 2020 compilation, Cache 02. He has also previously done a remix on French label POLAAR’s 2019 compilation called Territoires Vol.2.

The title of the album Tayutau (揺蕩う) is an ancient Japanese word normally used in haiku and literature referring to a state of indecisiveness or of losing purpose. The grungy beats and textures on the album do well to play up to a feeling of malaise, or drifting through space.

“Too many things have changed since starting to make this album, and I think that is reflected in the production,” explains Prettybwoy on the album release.

Any album release is already an event fraught with anxiety and stress as one anticipates the reaction of the public to one’s work. This feeling is exponentially more frightening on a debut release, which this is; and that is all before considering what Prettybwoy went through during the production of the album.

Supposedly, the album was made over the last two years while the artist went through isolation, job loss, burnt hard drives and even almost losing the whole project. What a relief that the single released already has been well worth the effort.

Ten tracks make up the album, ranging from experimental garage to techno and ambient. Guest appearances from IIII and Primula round out a very intriguing insight into an artist’s darker moments.

“The album can be split into three parts – tracks I made before the pandemic when things felt stable, tracks made during lockdown in isolation, and tracks made during the cautious and conflicted opening up and the lead up to the Olympics. There has been so much confusion and changes back and forth, but I want to have hope and try to keep focused, which at times hasn't been easy.”

Flooded with complicated emotions, separate from all the external issues, Tayutau is also an album that comes from a place of internal uncertainty.

“This is a trip in search of my new identity, or maybe to understand my current one. I am Japanese, living in Japan, but my music is only released by labels from other countries. I am a member of SVBKVLT (China), and also Polaar (France), but where or who am I in Japan?"

Prettybwoy invited CGI artist Jingxin Wang to manifest these feelings as artwork for the album. The artist also took the first two tracks from the album Destination, featuring lIlI, and Genetic Dance II, and brought them to life as a surreal sci-fi mini-movie that goes deep into the producer’s mind as the lyrics describe. Glitches and space themes make for an uncertain, eerie atmosphere, blending strangely with Prettybwoy’s tracks. Everything seems very uncertain but vivid at the same time.

Tayutau is scheduled for a September 17 release. Prettybwoy has shared 'Destination feat. IIII' from the album along with the aforementioned mini film via Fact Magazine. Pre-order it here. SVBKVLT have also announced a separate EP of remixes will be released soon after the album drop.