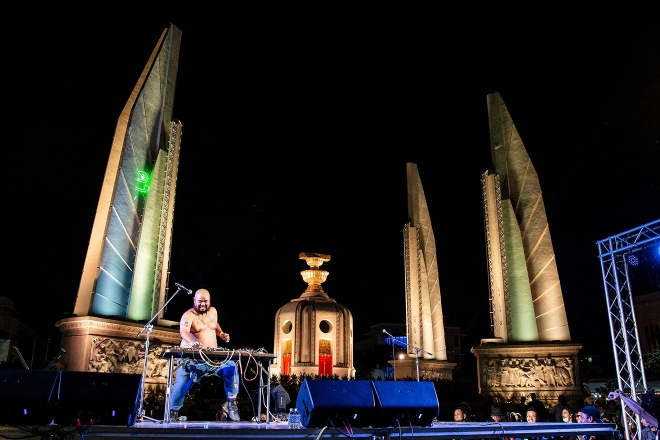 Pisitakun Kuntalang cut a looming, memorable figure at a recent event organised as part of the protests that have broken out across Thailand this summer, a youth-led movement demanding constitutional and monarchical reform. Shirtless, pouring sweat and beaming energy over a packed crowd of protestors, the Bangkok artist played two tracks from his recent album Absolute C.O.U.P. in front of the soaring wings of the Democracy Monument in the city center. This is where the ongoing protests officially launched on July 18, and the monument provided a poignant backdrop to a brief, if loud, performance of Pisitakun’s politically-themed, sonically adventurous work.

The rising cry for government reform among Thai youth echoes longstanding concerns for the multidisciplinary artist. Absolute C.O.U.P., which was released by Chinabot soon after the protests began, is more riot soundtrack than club banger, an aggressive mix of hard techno, military marching beats, Thai pop and ethnic minority musical influences. One track features a sample from a speech given by current Prime Minister Prayut Chan-o-cha shortly after he led a successful military coup in 2014 — his government is the main target of the current protests.

Pisitakun began conceiving the album two years ago, reflecting on Thailand’s unique modern history of political turbulence (there have been three coups in the artist’s lifetime alone). Its dense, abrasive, anarchic take on dance music places Pisitakun in an underground niche within Bangkok’s music scene, at home in independent venues like De Commune and JAM. He was pleased to note that his music found an enthusiastic reception at the recent Democracy Monument performance. “I felt really happy, because they were more concerned about the meaning of the music,” Pisitakun told Mixmag Asia. “They know what I’m trying to say.”

While his music doesn’t fare all that well in the more mainstream, EDM-dominant corners of Bangkok’s club scene, it does provide an appropriate soundtrack to the protest groups gathering now on Bangkok’s streets. “In the ‘60s, when there was a protest, it was folk music,” he says. “This new generation, they have rap. But to talk about this message [with] electronic music — that’s never happened before.”

Pisitakun is also a painter, and has attended daily meetings with other creatives to discuss the best way to use their skills and network in support of the protest effort. When making Absolute C.O.U.P., he had no idea that he’d be spending so much time on direct political action immediately after the album’s release. The current moment feels like a singular inflection point where Pisitakun’s artistic and social goals have merged. “This movement is going really far, further than my album,” he says. “This time, everyone is coming out to talk about the monarchy, about what’s happening, what we want to share, what we want to control.”

“My priority now is how we’re moving the art scene into the protest,” Pisitakun adds. “The artist or the musician, they have to support the ones that are fighting for the people… The main topic for me is that we have to try to go together with this kind of movement.”