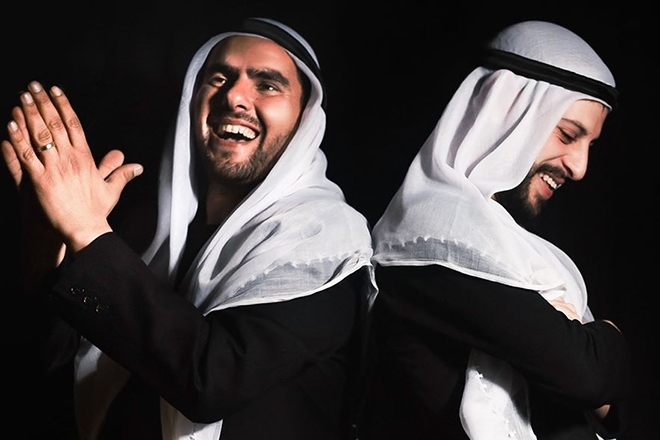 Palestinian electromic duo Zenobia زنّوبيا have releaed their debut album via Acid Arab. The 10-track album is called ‘Halak Halak’, which is a slang term that means welcome, welcome.

The album was recorded and mixed in Shefa-’Amr, an Arab city in northern Israel, and released on the Parisian label Acid Arab Records, which is a special partnership between the Belgium-based indie label Crammed Discs and electronic dance duo Acid Arab.

Listen to 'Desert Hafla' below:

Nasser Halahih has been one of the most influential leading figures in the Palestinian electronic scene since the 90s. Isam Elias, on the other hand, having a strong background in Western classical music, is a keyboard virtuoso. Together, they make up Zenobia زنّوبيا. Their music layers pop sensibilities, traditional tonalities of Arabic music and dabke rhythms of Palestine and Syria over heavier, driving beats.

The name of Zenobia زنّوبيا is inspired by the queen of Palmyra — Septimia Zenobia — who ruled Syria in the third century. It makes sense, therefore, that the duo makes music that is deeply rooted in the historical musical traditions of the Levant.

The predecessor of ‘Halak Halak’ is Zenobia’s self-titled EP, released in April 2019. The EP is a succinct three-song collection that introduced the duo’s forward-thinking sound. Aside from putting out new releases, the group has also been touring since 2018. They’ve taken the stage at Oslo World Music Festival, Worldstock and Scopitone, the Paris Techno Parade, the Amsterdam Dance Event and will be taking many more in the next months to come.