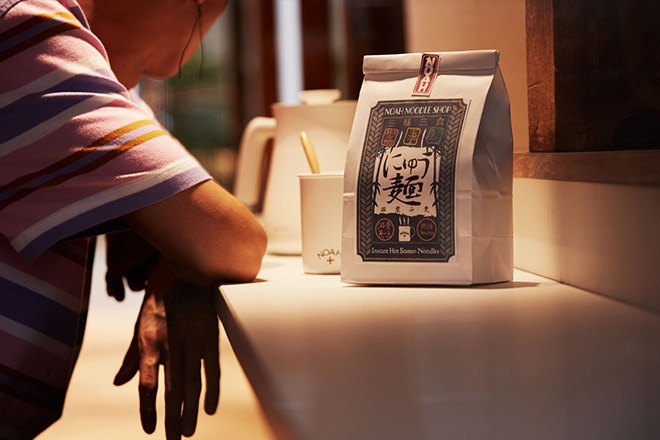 New York streetwear label NOAH has just opened a new store in Osaka, Japan that you could easily mistake for being a traditional noodle shop, well, simply because it’s taken over a century old mom and dad store. The new design aesthetic of the boutique is derived from the story of preserving the appearance of a 100-year old noodle shop that was previously a family-run business.

Keeping its historic design intact with the addition of modern elements and minus a functional kitchen, NOAH has adopted Kibori Kuma — a wooden carving of a bear holding a salmon in its mouth, as the symbol of the recent store opening. It relates to Japanese philosophy of a blend of rural and artisanal tradition with a new-age way of aesthetics, while paying homage to the community values, the balance of nature and the responsibility each species has for one another.

While scouting for potential sites and viewing the building where the noodle shop is located, the NOAH team were shown a photo album by the owner that depicted the history of the defunct family-run business. The whole family lived above the restaurant. Although they don’t serve any noodles, I’m sure the family is happy that the noodle shop spirit is very much alive through the efforts made by NOAH.

It is undoubtedly a very uncertain period to open a new business but NOAH made it happen by an active statement — it’s important to show faith during this pandemic and by showing the community to be persistent in overcoming any adversity. As a streetwear brand, NOAH shows how they care for the community and want to remain connected to the world, adding in a press statement, “opening our doors is our way of affirming that humanity cannot be stopped.”

NOAH is an American streetwear brand founded by Brendon Babenzian, former creative director of Supreme. He has successfully created a niche market for people who are trying to keep their lifestyle low key and sheltered from hype, although he comes across as a mastermind of antithesis-style of marketing where consumers are sold to on the basis of anti-consumerism. Brendon was quoted speaking to VICE, “we're not trying to push tons of crap. If it appeals to you, buy it. But if you're buying it because VICE says it's cool, don't.” He continues, “it’s not about buying the cool pieces but more about whether you have a vision of what you are doing”.

NOAH has been actively raising issues about the environment and how they as a clothing brand will pursue sustainability and even matters relating to humanity. Check out more details about NOAH on their official website and peep the video below.