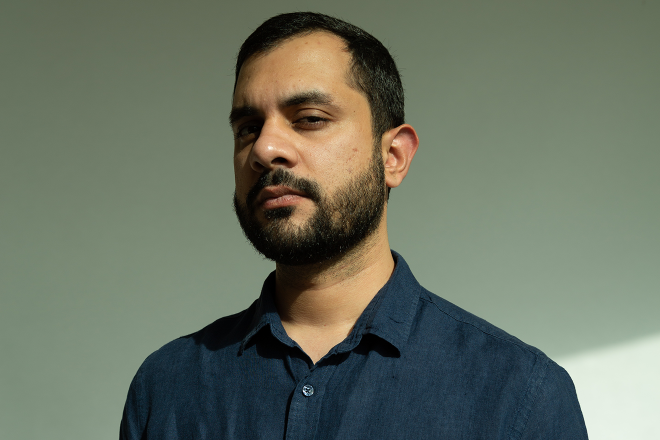 Bilal Khan aka Rudoh could be easily perceived as one of Pakistan’s vital club music innovators — his forward thinking approach to elaborating Karachi’s nocturnal soundscape saw him take steady steps to further immerse himself as well as his hometown.

An early groundbreaking moment saw him team up with Dynoman to create Forever South (FXS), probably Pakistan’s first events and record label dedicated to electronic sounds. He then spent a few years in soaking in London’s club scene furthering his engineering skills at SAE Institute; together with Rohail Hyatt, Rudoh set up Box in a Box, a 7.1 surround sound mixing studio, which was eventually followed by setting up another state of the art sound space called Aleph Studios. His most recent venture involved teaming up with Bangkok-based promoter Sameer Arshad (behind the Qommon parties), to create Jugaar Records, a collaborative label project rooted in the South Asian problem-solving mentality jugaad, which implies that only non-conventional approaches will be applied.

On the music front, Rudoh rarely holds back — and the next 60 minutes you’re about to listen to shows Rudoh’s true form of disciplinary variety. For a craftily curated range of bass-fuelled breakbeat that touches on funky grooves, bouncy electro, right through to dubby and deep chord-work, hit play below after finding out more about an artist you need to know, if you don’t already.

I recently moved to Dubai, but I was born and raised in Karachi, Pakistan. How I got here is because of many reasons, but mainly work-related.

I’m not as involved as much as I’d like to be. I don’t get much time between my day-time job and producing music,

I’ve been digging this new wave of electro, breaks, and techno packed into 1 track. Labels like Club Glow, International Chrome, Cultivated Electronics, Club Design, Mechatronica, and many more are doing an excellent job of curating this vibe. It’s rapidly getting picked up worldwide.

I was at Fold in London a few weeks ago and in the midst of very techno-oriented sets, you’d hear some really sick, break-y electro tunes being used to provide a different flavour. It made the sets more interesting and dynamic for me, straight 4x4 on the floor for too long can get a bit too much for me, so it was nice to see this sorta range in techno-oriented sets.

Chalo from Bangkok has been doing interesting work. We’ve been in touch recently and he’ll be releasing a track on Jugaar records (a label I co-run).

Nic Ford based in Vietnam has been making some incredible ambient music, he’s also featuring a track with Jugaar Records on its upcoming compilation.

Mr.Ho from Hong Kong has been a favourite for quite some time now. His last release on Cabaret Recordings has been a personal favourite. He’s been doing really cool work with his record label Klassewrecks.

From pre to post-pandemic, what has changed & what hasn’t changed about your life in the music world?

Just before the pandemic and lockdown hit, I had moved to Dubai so it was tough getting to know the city and people. In Karachi, I had a wide circle of friends that I would meet and hang out with, which kept me busy and away from making music. After moving to Dubai I’ve been spending more time producing music. In the lockdown-induced seclusion, I discovered a ton of new music and it gave me ample amount of time and space, without any distractions, to make more music. Now that habit has sort of carried on. I’m making a lot more music than before, and I have more releases on the way as well.

I’m currently working in the real estate market in Dubai. I also live quite far from the city so there’s a daily commute and the nature of my work is as such that I drive around 400/500 Km every day, some days it's even more. I’ve been listening to a lot of music whilst driving and I wanted to put together a set that makes long drives more bearable haha. But please don’t expect ez listening, the mix gets quite jumpy and tense.

I have some dates being worked at the end of the year around Thailand and the Asia region. For now, I can say it’ll be playing at Wonderfruit in December.