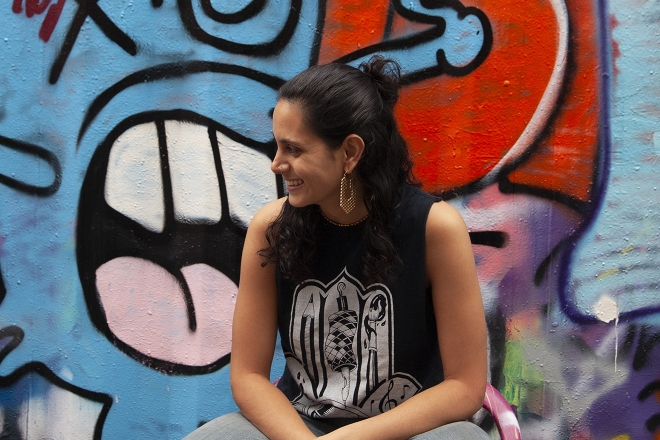 Pia Collada is a half British, half Indian artist who’s seen her musical prowess grow from having lived around the world; she grew up between India, USA and Tanzania, and is currently settled in Goa where a multicultural atmosphere sings to her beat.

Her beat is a unique one too — Pia takes a funkier approach to music that sees her infuse hip hop, reggae, dancehall, and afro-influenced genres from house to trap. Need a dose of invigorating female energy? Look no further than Goa-based Pia Collada.

Tune in to Mixmag Asia Radio with Pia Collada while reading her interview below.

I’m based in Goa and moved here two years ago from Delhi. I grew up between India, U.S.A and Tanzania so Goa’s mix of Indian and international community makes me feel at home.

Goa feels like it’s in a really special place right now because even though it’s got a strong musical history, a lot of young, creative people moved here during the pandemic so there’s a bunch of experimental events and collaborations happening. Goa also attracts musicians from all over the world so you get a really rich and diverse scene. You can listen to good music every night of the week if you know where to look. It’s also recently becoming a hub for underground music with artists like Breaka, Manara and Madam X coming in, which is exciting.

An island where palm trees grow bass speakers instead of coconuts

I’ve been loving the growing popularity of afro-inspired music in India. It used to feel like only a handful of us were listening to or playing such music here, but recently we’ve started hearing afrobeat playing even at tiny fish-thali restaurants in Goa. It’s great.

On a personal level I’ve been following the development of genres like amapiano and gqom because they feel like a great progression from classic afro-beat into electronic music. It feels like the fun of afro drums with some of the darkness and heavy-weight of bass music, which opens up crazy possibilities to cruise between genres in one set. I’ve really enjoyed finding my sound in this in-between space.

One of my favourite Indian producers is Stain, who finds a great way of blending bass music with melodic, eclectic sounds. You’ll hear some of his newer songs in this set, along with tracks by other Indian producers like Prismer and Flux Vortex.

I also really like Indian DJ/producer Kiss Nuka because of the sound she plays; it's creative across multiple fields and is unapologetically herself.

From outside of India - a big shoutout to my childhood friend from Tanzania, Lyla, who recently did Boiler Room Pakistan, played a banger set and threw in some of her own roots. It also hits home because we’d love to throw events together but know how hard it is between India and Pakistan right now. Even so, the idea and the woman are inspiring.

Everything changed. I moved to Goa during the pandemic to find a healthier, slower pace of life. I get to spend my mornings surfing and skateboarding instead of being stuck in traffic. Living in Delhi I felt more pressured to cater to a crowd when playing my sets, because even though there’s a strong underground scene in the city, I didn't feel as comfortable experimenting as I do in Goa. I have a community of musician friends here who inspire me across genres like afro-folk, jazz, funk and reggae, so there’s always something new and exciting to learn.

I love a progression from dark beats to funky dance grooves, keeping a universal language of bass throughout. I’m inspired by genre-bending producers like Mungk, Violet and Tribal Brothers, who can find conversations between sounds from different cultures.

I also recently went back to Tanzania after 10 years for my high-school reunion, which was an amazing trip and I heard great music everywhere. Every rickshaw we rode in was playing the newest afrobeat and amapiano from their tiny speakers. I wanted to find a way to bring those feelings back with me into the set while still keeping it bass heavy.

I was playing in Goa and enjoyed being back home throughout September. From October onwards there’s some exciting things coming up both in and out of the country. It’s been a great year and only getting better!