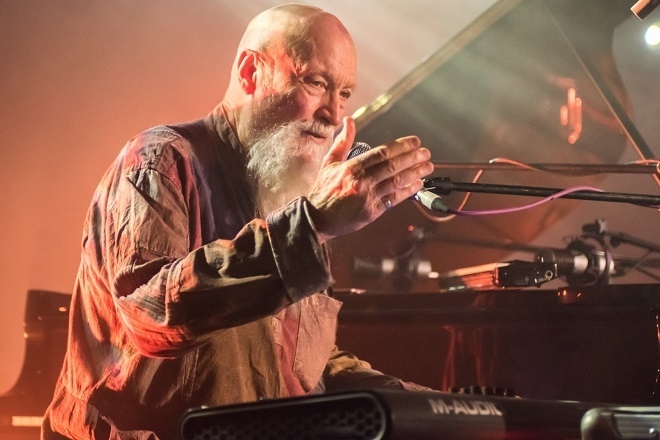 Revered musician and composer Terry Riley is set to perform at Tokyo's Billboard Live venue for the first time on Wednesday, March 16. The concert will be split over two stages, with the stage one performance streamed worldwide via Musicmine's streaming platform, Livemine.

Now based in Japan, Riley began his long and winding musical career more than 60 years ago, emerging from San Francisco's Bay Area in the late '50s. Credited with introducing the use of repetition to western composition, his influence on contemporary music – and dance music in particular – cannot be overstated. Simply put, much of his pioneering work is light years ahead of its time. Forming minimalist soundscapes while incorporating complex rhythmic structures, his music elegantly surfs genre boundaries, with discernible international influences a key feature of much of his catalogue. Jazz and Indian classical music permeate his best-known compositions, and his innovative use of delays and other groundbreaking production techniques continue to inspire some of the world's most iconic producers today. Detroit techno titan Jeff Mills is a known admirer of Riley's music – with the pair sharing the stage for a 2017 performance at Tokyo's WWW X – while venerated Japanese composer Ryuichi Sakamoto is another proud fan. “I saw a video of Terry Riley’s performance when I was 18 or 19. Since then he’s been a legend to me,” said Sakamoto in a press release for the upcoming show. “It’s mesmerizing that now he lives in Japan.”

Each of the two performance stages will include different themes and concepts, and electro artist Krikor Kouchian will appear as the opening act on stage one. This is a fantastic chance to witness a true master of his craft in live-action, and for fans of the minimal realms of the electronic music spectrum curious to learn more about the origins of the sound, an opportunity not to be missed.

You can listen to Terry Riley's stunning 1964 piece 'In C' here:

The performance takes place from 4.30 pm (JST) on March 16. Tickets and more information can be found here