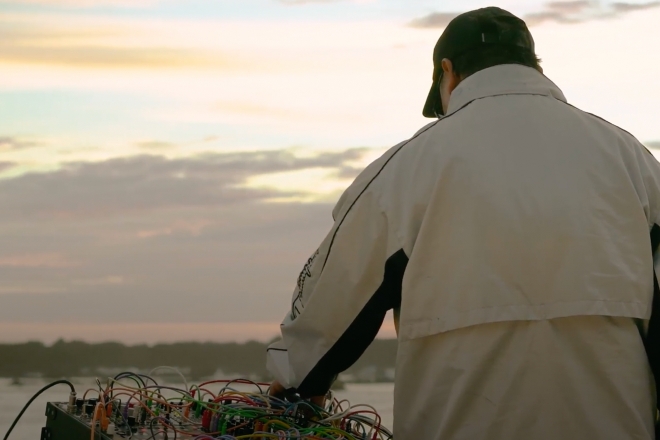 We’re now into just under three hours of video footage of exploring Indonesia’s archipelago while being soundtracked by some of the country’s finest producers and DJs.

For the third episode in Mixmag Asia’s ongoing series with Indonesian creative house Nusountara, we head to Pantai Tanjung Layar (Tanjung Layar Beach) in Banten province to listen to a 100% live set from ambient and experimental artist Deathless.

Ramz, or Rambo as he’s called by his peers, is Deathless. Founded in 2005, Deathless is an experimental artist who’s found his place in the analogue realm, venturing far into the sonic world of drone or sometimes just reigning in his thoughts over syncopated, beat-driven techno.

Deathless expresses his heavy, apocalyptic musical taste through analogue and modular methods — not only is he a sound designer, guitarist and producer, but he is also an instrument builder. He approaches producing music with a signature process, where minimal chord progression stands out over it’s accompanying complex backgrounds, sonic fluctuations, repetitive sounds, and easy-to-fall-for rhythms.

His first noise/experimental release was composition ‘Ars Longa, Vita Brevis’ from 2009, from which he followed up with a second album ‘Litteraetantri’, both out on Sonic Funeral & Doomwood. Plenty of releases followed, and in 2018, Deathless became a part of a free-improvised collective called Subtractive and Indomodular; the collective was made up of an Indonesia-based modular synth and eurorack community that regularly met, shared and inspired each other. Deathless' next release is a collaborative single with Baséput, which will be followed by a split album on Blank Orb in 2022.

The Mixmag Asia x Nusountara series is filmed from unique locations around the Indonesian archipelago — the third episode with Deathless airs this Sunday at 5pm (GMT+8) on Mixcloud LIVE.

Check out the teaser below.