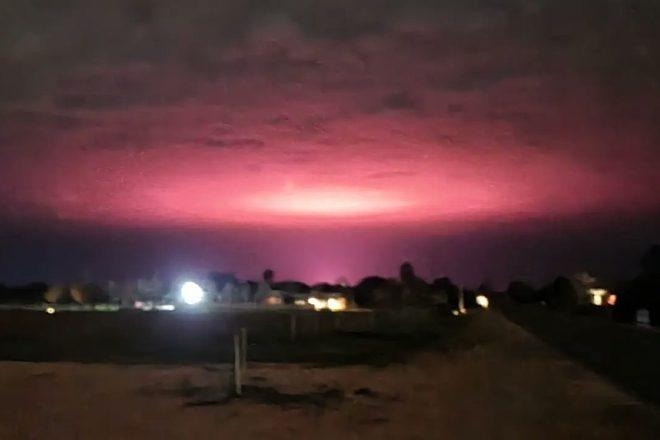 A pink glow was observed by residents of Mildura, Australia, on Tuesday evening (July 19) prompting questions as to what it could be.

The glow, which appeared to cast over much of the town and radiate a pink light into the air, appeared to be somewhat “alien-like”.

Residents took to Twitter and Facebook and were coming up with theories as to what this mysterious light could be. Could it be a portal to the Upside Down? Or an alien invasion?

Read this next: Student’s ‘Supermao’ spoils from Thailand get seized at Bali airport

"I read about a potential solar flare due to hit on Tuesday," said one user on Facebook. Another claimed that it could be a "portal to the time-space continuum."

However, medical cannabis producers Cann Group confirmed to ABC Mildura-Swan Hill that they were the cause of the pink glow, putting an end to all the humorous speculations.

Dubbed aurora marijuanis - this special light was needed in Cann Group’s new wing of production in its growing facility.

"As you might know, cannabis grows on an extended day length. The flowering zone is 12 hours light and 12 hours dark, which is normally 7:AM to 7:PM," CEO Peter Crock said.

"With the new zone coming into use in the next day or two, we have had the lights on."

"Normally, the blackout blinds close at the same time as the sun sets, but last night we had the lights on and the blinds hadn't yet closed, so there was a period where it created a glow.”

He clarified that when the plants go to sleep, at 7:PM, the lights were turned off.

“A red spectrum light is often used. Normally the facility would have blackout blinds that come down at night, and will in the future block that glow.”

Cann Group Ltd was the first Australian firm to get permits for growing cannabis for clinical and research reasons.

After purchasing the property where it produces its cannabis in 2019, its Mildura business acquired its GMP licence on July 7 to develop and provide a variety of medical cannabis products domestically.

The light produced by the company was a phenomenon that residents were all spooked by. People gathered to their front lawns and back gardens in Mildura and the other nearby villages to take pictures of the spectral light.

Read this next: “Sobriety taught me that life is worth living”: life lessons with DJ Fat Tony

[Via: ABC and Guardian]