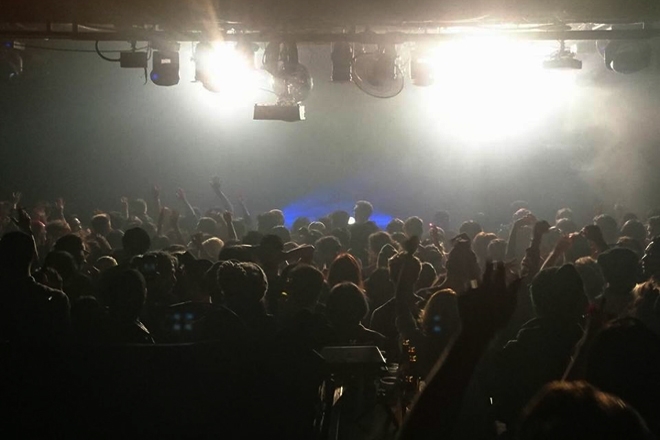 Nicolas Jaar’s stop at Taipei’s Korner was nothing short of invigorating.

For a good 15 minutes at the beginning of his set in Taipei, Nicolas Jaar wasn’t anywhere to be seen. A single white flashing light behind the DJ area spun around in circles and was the only illuminated thing in the dark room filled with nearly 1,000 excited people on a late dreary winter Wednesday night in the capital of Taipei.

The sounds coming out of the booming system were unnerving and slightly disturbing. Cymbals crashed. Old bed springs creaked. Thunder clapped into the clouds. Static distorted over and over again and people eventually started giving each other weird looks. “Did I really take off Thursday morning to listen to noise?” a friend even asked.

Upon Jaar’s arrival behind his laptop, the mood immediately shifted. Lights that were previously only white were now beaming with color. Bodies, which were sashaying gently before, seemed to be ready to let loose awaiting anything musical. People pushed forward to get a better view of the dapper DJ/producer/musical genius and then the party really started.

The first wave of rolling drums dropped into the mix, and pandemonium kicked in. Making people wait for it is a trait that Jaar has perfected over the years. His mixes, live shows and DJ sets tend to start off in outer or inner space and eventually kick into a gear that lands straight in the soul.

Jaar played for nearly three hours at Korner and the masses stayed until the very end, which happened to be a filtered acapela of The Temptations softly singing the chorus to 'Just My Imagination', and the only song I recognized the whole night. Jaar moved mountains with his beating drums, took the crowd to African deserts with impassioned chanting, and transversed the globe with music so soulful that meaning of whatever language it was in just didn’t matter. Screams for an encore were met with silence as the lights went on. Jaar didn’t utter one word to the crowd, but he didn’t need to because his music did all the talking for him.

As a hip-hop kid who has grown up on funky cut and paste samples, I was worried that Jaar’s recent musical forays would be too dark or too cool or too serious or too techno for me to enjoy. I was pleasantly surprised that Jaar continues in this cut and paste tradition. He played incredibly obscure music, but kept throwing in all the frightening samples from the start of his set, which created an astonishingly relatable vibe, which was ready made for missing a weekday morning of work.