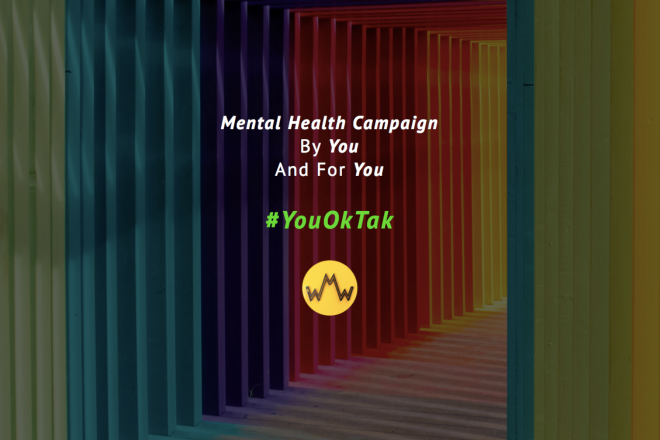 Checking in with someone is an easy task; a simple “hello” or a “how are you doing?” just to churn out a smile takes less than one minute. Whether it was 1 or 100 smiles — the feeling that is pulled within that act is the initiative of what Wired Music Week strives for in their #YouOkTak campaign during World Mental Health Day this weekend.

A common saying in the peninsular region of Southeast Asia, #YouOkTak is a casual conversation starter that translates to “Are you ok?” in Malaysia’s language of Bahasa Melayu infused with English, or Manglish.

In honour of World Mental Health Day this October 10, Wired Music Week has pulled together the nightlife, events and creative industry in the front and behind the scenes to band together to ask and share their voices with others around them. The invite was extended to checking in with everyone who was part of the reason you had an unforgettable night out, nights that shaped your fondest memories or even those nights you were blacked out.

Malaysia’s event and nightlife industries are one of the hardest hit in the Asian region that was hit by the pandemic, having been closed since March 17, 2020, with no end of sight. Take a look at a piece we wrote which talks about how the entertainment sector in Malaysia opening up but nightlife still stands in the dark.

The campaign ran over the weekend starting on October 9 and saw the likes of the industry posting up social posts predominately in TikTok to ask #YouOkTak? The positivity within the feeds brought a continuous ripple effect that trickled through everyone’s contacts, in hopes of sharing a smile for an impactful cause for those who may have been overlooked during these hard times in Malaysia.


Industry folks such as DJ MUSHROOM, Victor G, Leonard Sinclair, RIMKA and Sherry Alyssa all participated in the campaign — which in turn created an avalanche of other KOLs such as Marc Sadique, Elden Chan and Matsalehmamat to participate in the flow.

♬ beside you - keshi

Spread the love! ❤️ Share this so together, we can reach out to our brothers and sisters. @wiredmusicweek #YouOkTak #mentalhealthawareness #fyp

#YouOkTak - Reaching out to those who you care is as simple as that. 🎥by Leonard Sinclair #mentalhealthawareness #tiktokmy #fyp

♬ beside you - keshi

Reflected in Wired Music Week’s campaign objective, a statement read: “This campaign was designed, in conjunction with World Mental Health Day, to be owned by you and run for everyone.” Over the past year and a half, Malaysia has seen an influx of individuals promoting mental health due to the awareness of its detrimental effects — especially due to the pandemic. According to the Ministry of Health in Malaysia, 1 in 3 Malaysians suffer from Mental Health disorders and due to the stigma in Asia, those who struggle may not seek help and suffer in silence.

Wired Music Week is Asia’s largest electronic music conference and festival based in Kuala Lumpur, Malaysia. Connecting the industry with its consumers through electronic music and the entertainment scene — its three-day four-night event sparks meaningful conversations between music enthusiasts, music purveyors and everyone that is a who’s who in the music industry.

Join their initiative to help raise awareness about the importance of Mental Health — let’s help bring those smiles on the dancefloor back up in the virtual space we share.