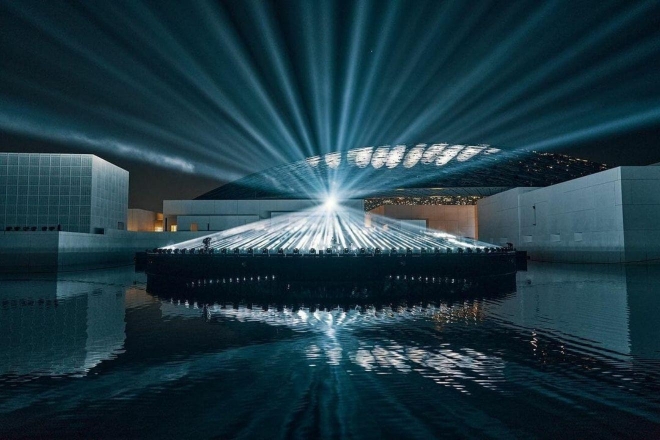 This New Year’s Eve celebrations weren’t quite as bright as we hoped 2022 would bring. With the extreme uptick in cases of COVID-19 growing around the globe, celebrations were surely limited to kitchen afterparties for all. For anyone watching music online from their kitchen, one thing was for sure — David Guetta’s NYE livestream at The Louvre in Abu Dhabi shined brighter than all the festivals we missed in 2021 combined.

Sure, we have seen some amazing livestreams over the past two years of being locked in at home. From sparkly beaches to breathtaking landscapes and monumental buildings around the globe, it’s almost like we’ve travelled the world vicariously via streaming the electronic music scene.

And Guetta, in true Guetta fashion, had to one-up himself this year when it comes to amazing livestreams. Last year, the French artist brought the Musée du Louvre Paris to our screens for New Year’s Eve as he beamed a light show across the city’s iconic glass pyramid. This year, he took over The Lourve in Abu Dhabi for a breathtaking performance that doubles as a strong statement for the development of electronic music in the Middle East.

According to The Music Essentials, H.E. Saood Abdulaziz Al Hosani, Undersecretary of the Department of Culture and Tourism in Abu Dhabi, said, “To have a global artist who is loved around the world, combined with the iconic architectural artistry of the Louvre Abu Dhabi and the wonders it houses, is phenomenal. We are proud that we can host this unmissable moment in Abu Dhabi, a destination that brings communities together and welcomes visitors from across the globe.”

The United At Home series in Abu Dhabi featured a custom made floating stage that sits in a bed of water overlooking the Persian Gulf with over 500 lights across each pivotal point of where your eyes can connect the dots. The spectacular background of the Louvre projects some of the museum's key historical artworks as the water illuminates each and every particle that is seen across the night sky of the Arabian desert. David Guetta is the first artist to perform at both Louvre museums in Paris and Abu Dhabi and before his show, he had fully immersed himself in what The Louvre had to offer along with absorbing himself in the essence of the Middle East. His selection of tracks includes his unreleased number with MORTEN ‘Permanence’, Zedd’s rework of Acraze’s track ‘Do It To It’ that’s infused with Squid Game, ‘It Gets Better’ by Swedish House Mafia to classics such as Energy 52 ‘Cafe Del Mar’ to an array of Guetta’s original tracks and more.

In thenationalnews.com, Guetta’s manager Jean-Guillaume Charvet talked about how the musical elements were carefully crafted to match its Arabian aesthetics. “The music played is more electronic and that's to give space for the architecture to shine in the show. The performance is less based on pure energy and more on sensibility and capturing every detail of the amazing museum in Abu Dhabi.”

Not going to lie, some of us here are dying to experience this light show IRL, however, we’re happy with even ¼ of this if anything. Make space for an hour in your day to relive your NYE with this pre-recorded set at the Louvre in Abu Dhabi below:

Elsewhere in the Middle East, SOUNDSTORM by MDLBEAST and XP Music Conference were also unfolding, showcasing the sounds and the acceleration of electronic music within the region. We also saw the launch of SONDUKE, an independent magazine launched in the Arab Gulf that is spotlighting Arab talent. And now…. we have a livestream that showcases the essence of Abu Dhabi’s beautiful architecture and culture tied with a globally renowned artist, altogether exhibiting how the Middle East is making its mark within the scene to the world.