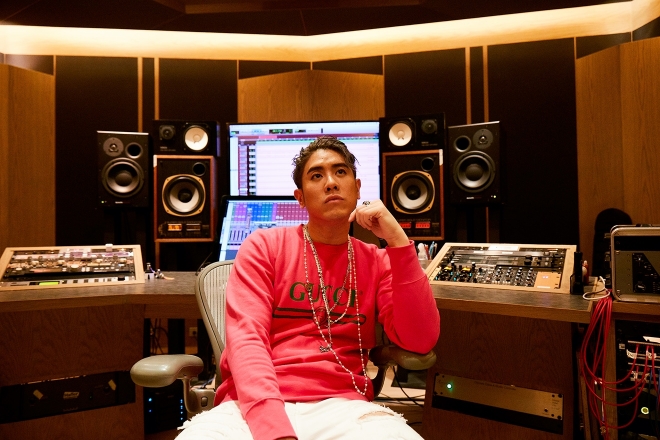 KING CHAIN comin’ in hot when it comes to music since relocating back to his motherland. In November, he was the first artist to be announced off the Billboard presents Electric Asia Vol 4 compilation with a tune called ‘Kryptonite’ that was built on an earworm spy theme riff. At the same time, he announced that he was being co-managed by theLOOP in Taipei alongside SHFT Asia.

The management shift saw him ease seamlessly into Taipei’s celebrity music scene, and his first release is a collab with pop star-turned-DJ Nickthereal and his tune ‘Future In Your Eyes’. KING CHAIN reworks the tune and sees him experimenting with deep levels of low frequency while injecting his signature ‘ghetto techno’ sound for an overall tune that's a little harder than we would have expected from a pop vocal collab. But, that was the point.

“When we talked about the music direction for this remix, people knew me as a bass and trap DJ, and I instantly had this idea that I wanna do something different,” KING CHAIN says of the collaboration. "I started DJing with vinyl and techno music and techno has always been my biggest passion but unfortunately some people labelled it as more of an underground genre so I didn’t really have the courage to release a legit techno track before. But we totally agreed that this is the best chance for us to do what we love for dance music, and we infused this remix with my signature ghetto techno sound.”

“Surprisingly the techno drop came out pretty fire with the original chill vibe vocals. We really dig in the beauty of the contrast and we also hope that this could get the attention from all the techno heads in the international market.”

Listen to ‘Future In Your Eyes’ by Nickthereal (KING CHAIN remix) below:

KING CHAIN was born and raised in Taipei where he spun tech house before transplanting to LA for a stint where he fell under the city’s West Coast bass and grime spell. When he was lured back to the Far East, he settled in Shanghai and really got a chance to cut his teeth as a DJ and producer. But now he’s back in Taiwan and busy as hell. “I’m also working on a few original tracks with Patrick Brasca, Julia Wu, Shadow Project, and more. It’s been a blast to be inspired by them, and working with so many different artists has been a big influence in the music texture I’m delivering.”

‘Future In Your Eyes’ by Nickthereal (KING CHAIN remix) was released on February 22 on Universal Music. Buy it here.