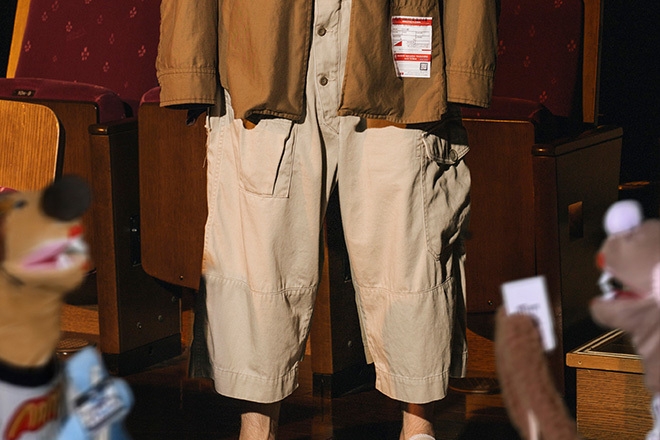 I love to throw the word muppet around, it seems rather apt in today’s world of well, let’s just say, opinion. But sometimes, puppets aren’t a bad thing, they lend themselves to humans as an extended arm in the form of amicability.

And while we’re on the subject of puppets, it’s worth noting that Maison Mihara Yasuhiro unveiled their latest 2021SS Men's Collection collection to an audience of furry friends and journalists. The revelation came from a short film that debuted at the virtual edition of Paris Fashion Week last weekend, immediately drawing attention, in a lighthearted-sort-of-way, at the common outrageous folly witnessed at fashion shows. The video is rather on point, and more so timely in a positive way, depicting one of the puppet characters bustling its way through the paparazzi and fans before entering the runway focused theatrics of a fashion show.

Mihara Yasuhiro shared with lifestyle purveyor Hypebeast, "brands have had to adapt to this lockdown in all sorts of ways, it’s been interesting looking at digital ways of creating a memorable presentation, it’s made us take a step back and realise what is most important – the product itself and the art of expression. It doesn’t affect who wears our clothes as we’ve always had a very consistent aesthetic running through season to season.”

So when it comes to his new collection, and just like the video, the designer is on point about many things — the new line evokes his consistent attachment to philosophy, symmetry, flow and freedom of imagination. There’s a nuance of subdued confidence, and to round up his fashion foray, Mihara says, "when humans solve problems, new problems arise. What is the problem?... The reason I like fashion is that the more I pursue it, the more I ask the question ‘What is fashion?’ There is no answer, because there is no problem at all.”

Check out the fashion puppet show below.

[via Hypebeast and Vogue]