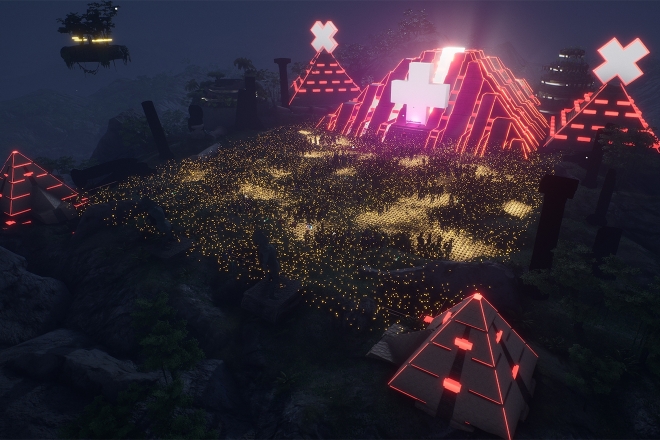 Over the last year, streaming has dominated our music community. It started in China, with really not much more than a camera strapped to a tripod and a DJ. Technology quickly evolved to meet demand and the race was soon on to see who could produce the most creative stream and impress the most number of people. Then came HYDEOUT.

Originally set to debut as a multi-weekend festival in Singapore but suffered the same fate as nearly every other festival last year, the organizers refocused and channelled their efforts into the fresh concept that we see before us now. Since launching in January of this year, HYDEOUT has been on a mission to showcase the industry’s most in-demand artists across a multi-genre music experience that's painted with neon and looks to electrify and connect fans all over the world. The series ecplises most digital experiences we've been privy to, offering a new level immersion and activity with a mind-boggling level of production. Phase One led the digital event landscape with marquee performances from artists like Rita Ora, Martin Garrix, NGHTMRE, Andrew Rayel, Cosmic Gate, Don Diablo, Nervo, Yellow Claw, Dombresky, Eptic, Flux Pavillion and more.

The 40-part episodic series takes place across over 20 incredible stages each with their own distinct singular aesthetic for an audiovisual journey bar none. Fans may find themselves in the expanse of the Sahara at The Mirage Stage, exploring the futuristic cityscapes of HydeCity, HydeAlley, The Arch, and Pandemonium, or deep in the tropical worlds of Aqua Sphere and Sanctum. Together with HYDEOUT’s unique interactive features like global chat rooms, custom avatars, watch parties and mini-games, the platform offers a way forward for artists and fans looking for a deeper sense of connection amidst the crowded digital event ecosystem.

Here’s how it works: performance episodes from both phases are available after their premiere as a Video on Demand experience. Fans can opt to purchase a Season Pass for US$49.90, which grants access to over 40 episodes (including episodes featuring Wiz Khalifa, Kid Laroi, Charli XCX, G-Eazy, and Tokimonsta), a personalised avatar, and access to games, or a Pay As You Go Pass, which allows them to access individual shows from US$2 each. The first 5 minutes of ALL episodes are completely free to watch, even for Pay As You Go pass holder.