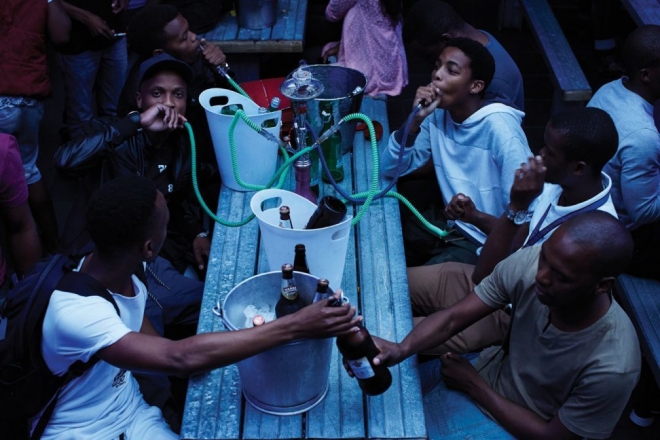 Saturday morning in Durban, 2am, and both of Club 101’s dimly lit dancefloors are juddering to hypnotic electronic music that has been forged in the city’s surrounding townships.

Upstairs, the sprawling rooftop bar is pulsating with the stuttering snare and echoing sonar ping of Griffit Vigo’s ‘Gqom Five’ while the dancefloor heaves with people dancing bhenga, a shuffling, winding, limb-swinging dance specific to Durban.

On stage, Thuksin, a DJ / producer from the township Lamontville, is mixing. At the back of the rooftop small groups of people are milling around. Some are dancing, others are smoking shisha pipes and drinking.

As a menacing synth tone hangs in the air and Thuksin’s set intensifies, a 101 regular known as Gift stops dancing and turns to gesture towards the crowd with a wild look in his eyes.

“If the DJ dropped a needle on a deep house record these people would kill him,” he says. “Right now, these people just want gqom.”

Gqom (pronounced “gom” with a clicking sound on the “g”) is a raw mutation of South African kwaito that has evolved in the Zulu-dominated neighbourhoods surrounding Durban’s city centre. Instead of the regular beat of house and the polished production techniques of commercial South African kwaito, the gqom that comes out of the townships uses broken beats and is made on basic home computers, with producers often deploying repetitive, sliced vocal samples, echo, and heavy percussive beats. The result is a dark, gritty and minimalist sound with similarities to dubstep, techno and Chicago juke.

“Gqom is the beating heartbeat of Durban,” Gift says zealously, holding his hands together and flexing his fingers as if he is holding a beating human heart in his hands. Since bumping into Mixmag at the bar hours earlier, he seems to have made it his mission to educate us about South African dance music and its subtleties – enthusiastically discussing everything from the latest Alicia Keys remix by the internationally renowned Johannesburg-based Black Coffee to the music distribution techniques used by underground gqom producers.

Since the early days of gqom, inner-city minibus drivers have played the music over their massive sound systems as a way of attracting customers to their vehicles, earning it the label ‘taxi music’.

“The taxis that travel around the city playing gqom are like tiny blood cells, and the roads are like veins,” Gift says, expanding on his heartbeat analogy. “Some people in Durban don’t even know what gqom is, but it’s always there in the background, flowing around the city.”

Over the last five years overseas interest in gqom has increased, with tracks produced in Durban’s townships being played by international DJs including the owner of the Hyperdub, label, Kode9, who’s likened the sound to “being suspended over the gravitational field of a black hole, and lovin’ it.”

In May 2015 gqom pioneers the Rude Boyz released an EP on London-based label Goon Club Allstars. In January 2016 a full-length gqom compilation came out on Gqom Oh!, a label founded by the Italian DJ Nan Kole. But even with this increasing international attention, raw township gqom remains a relatively underground sound in its home city. Although some elements have made their way into commercial music produced in Durban, it remains shunned by radio stations and the wider music industry.

Outside of the makeshift, mostly unlicensed clubs that exist in Durban’s townships, only two venues in the city centre are willing to play hardcore gqom music: The Havana Club, and Club 101.

“The music has certain associations and brings with it certain behaviours – that’s why they don’t like to play it too much in other clubs,” Ashoo Rampersad, the owner of Club 101, told us earlier that day. As we roam the utilitarian corridors and worn stairways of the converted warehouse, DJs, bar staff, and bouncers frequently approach Ashoo with questions. After passing through an office we emerge on a quiet balcony that overlooks Durban’s gleaming International Conference Centre.

“Even here, in the centre of the city, crime and violence are huge problems,” Ashoo says. “Durban is a tough city. Young people here live in the moment.

“Other club owners feel like gqom music doesn’t fit in with the culture of their club. It comes from poor townships, and is played on public transport used by the poor. It’s associated with drugs and violence. It is not associated with wealth or glamour.”

The rise of Durban’s unique gqom sound has been connected to a number of factors including the urbanisation of rural Zulu communities, the isolation experienced in less developed townships, growing political disillusionment among young black people, and changes in the city’s drug culture.

Gift says Durban has seen an explosion in ecstasy consumption over the last five years. “We call it ‘nkoh’,” he says.

“It wasn’t really part of black culture in the townships until recently. Now it’s everywhere, and it’s changed the way people listen to music.”

According to Gift and his friends, the other drugs of choice are codeine cough syrup and, amongst a minority, a highly addictive cocktail of chemicals known locally as ‘wunga’. One of its key ingredients is believed to be the antiretroviral drug Efavirenz, which produces psychedelic effects when smoked and is widely distributed by the South African government as part of a massive programme to combat AIDS.

“The guys that use that stuff,” says Julie, another 101 regular; “they’re the people walking around like zombies. When you look in their eyes it seems like they’ve got no souls.”

As the night wears on the music gets darker. Warping, gasping beats float over the dancefloor. Gunshot samples ring out across the rooftop, and savage drum bombardments tear at the speaker cones.

Gift and his friends immerse themselves in the sounds, winding their hips and shuffling their feet in the bhenga style. Other dancers strut, kicking their legs and slapping their thighs - performing a newer, more aggressive dance known as ‘skhotheni’.

While enthusiasts like Gift remain addicted to the classic gqom sound, the electronic music coming out of Durban’s townships is rapidly evolving. After his set Thuksin introduces me to other DJs and producers who are playing pool in the bar area next to the rooftop dance floor. “Styles and trends change quickly in the townships,” says Thuksin. “The gqom being produced today is totally different to the gqom tunes that were being made two years ago – and many producers are branching out into other genres.”

Currently, Thuksin is mainly producing ‘sgubhu’, an increasingly popular genre that uses a similar sound palette to gqom, but is closer to deep house when it comes to rhythm and tempo.

“People still love gqom on a night like this, but as a producer sgubhu offers more opportunities,” says Thuksin, who, like many other gqom producers, began producing at a very young age – in his case 14. “It has a groove that gqom fans can move to, but it’s less harsh. It’s not as strange or extreme. It’s a sound that’s more likely to be picked up by music industry executives and be played on the radio in South Africa.”

At around 5am Club 101 shuts for a couple of hours before re-opening to cater for clubbers who want to enjoy what Durbanites call a ‘morning bang’. As the second closing time approaches, rowdy devotees spill out into the narrow alleyway that runs alongside the club , many jumping into taxis and cars heading out to unlicensed venues in

the townships where they can continue the party.

As we dodge peanut-sellers and a few lurkers in the alleyway, Gift asks if we want a lift to an all-night gqom club 30km out of the city centre.

“The heartbeat never stops,” he says, with a grin.