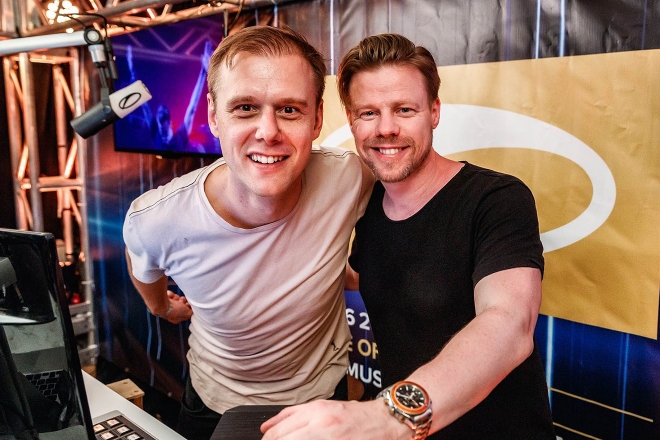 I think we can all agree that the music we call trance today is vastly different from how it sounded a decade ago. The line between trance and EDM has been blurred, especially when it comes to DJs like Ferry Corsten and Armin Van Buuren, who came up just after the turn of the century. Although still labelled as trance DJs, their sound has very much evolved to cater to a younger, main stage festival audience, but they are still without a doubt two of the genre's most iconic artists.

And that’s what makes this impromptu performance by these two original masters of trance so special. The two DJs got together for an all-vinyl performance and spun (literally) a 60-minute set full of classics from the heyday of trance.

The 60-minute mix starts out with Rank 1's ‘Airwave’, which was released in 2000 and went on to be one of the biggest anthems from that time. The playlist continues with music from Three Drives On A Vinyl, Inertia, Solarstone, Scott Bond, Above & Beyond and some late 90s Tiësto.

They closed the set out with their 2011 timeless collaboration called ‘Brute’ that was released via Corsten's Flashover Recordings.

The performance was in celebration of 1,000 episodes of van Buuren's A State Of Trance spanning almost 20 years.

“Celebrating the milestone number of 1000 episodes means looking back as well, and I feel that the best way to do so is to play some vinyl again,” said Armin of the b2b. “I couldn’t think of anyone better to do this with than Ferry; it’s a great honor.”

Ferry added: “Armin and I go way, way back. We went from frequently playing the same events in the late ‘90s to collaborating on several tracks over the course of the past twenty years. We were long due for a back-2-back set that takes us right back to the amazing moments we shared, especially since I started my residency at his A State Of Trance radio show earlier this year. And it only feels right to do it in a way that pays homage to those early days of our shared history: with vinyl!”

You can watch the full show below, courtesy of van Buuren's A State Of Trance.