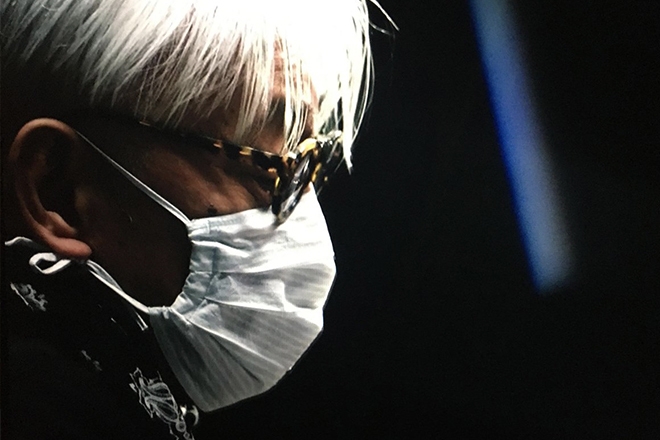 Easily known for breaking barriers in creative output as a musician and composer, Ryuichi Sakamoto knows how to expose variety with absolute consistency. His musical influences, which became native to his life, run from Beethoven to the Beatles and started when he was studying at Tokyo’s University of Art. He’s a classical pianist who is welcomed into the electronic music world with open arms and rightly so. Ryuichi is a founding member of electro-pop band Yellow Magic Orchestra who had a vast array of collaborations with the likes of the Dalai Lama, Salman Rushdie, Yossou N’Dour, David Bowie and Iggy Pop. Just that side of him alone is indicative of his borderless approach to music, and of course his respect and credibility in the synthetic music world. And let’s not forget his film scores like The Last Emperor, Merry Christmas Mr Lawrence and Femme Fatale.

Like most performers and artists right now, the stage is at home, and they’re all letting their fans in for a more personal and intimate experience. Sakamoto just recently presented a live concert titled “Playing the Piano for the Isolated’, and was accompanied by master of the Japanese shamisen Hidejiro Honjoh. The duo took on Sakomoto’s iconic classics such as ‘Andata’ and ‘Merry Christmas Mr Lawrence’, and it was a truly heartwarming saga.

As a follow up, Ryuichi is launching another digitally-inclined concept titled ‘Incomplete’ — a more intimate and connective performance via his YouTube channel, on which he comments, “In these times when things are not normal, I wanted to document the sensations I’ve been feeling. I invited a few of my musician friends to do this with me. I wanted to share the results with you all.” Sakamoto incorporates visual art from Zakkubalan who he has worked with on several occasions, with a new episode being released every three days.

Lighten your mood, elevate your senses and get down with Ryuichi Sakomoto below.