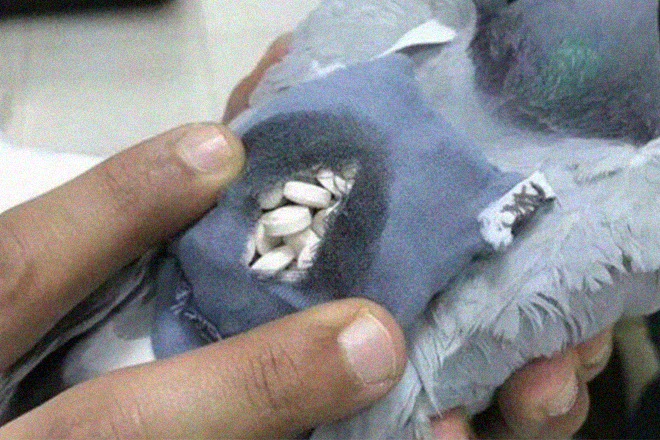 A pigeon carrying a small backpack filled with crystal meth was captured at a Canadian federal prison in Abbotsford, British Columbia.

Prison officers at the Pacific Institution noticed the bird and its unconventional attire in one of the prison yards, catching it after setting a trap, The Globe and Mail reported.

Upon capture, the officers found that the small fabric rucksack was filled with methamphetamine AKA crystal meth, and the pigeon is now being detained at the facility, with the matter currently “under investigation”.

Read this next: From Medellín to Manchester: inside the rise of tusi, Colombia's 'Pink Cocaine'

Speaking to The Globe and Mail, the regional president of the Union of Canadian Correctional Officers, John Randle said: “My initial reaction was shock because of all the advancements in technology and the number of drones we’ve seen.

“The fact that it’s tied to a pigeon is abnormal,” he continued.

While drug smuggling with birds is rare, there have been other instances when people have attempted the avian route. In 2017, Kuwaiti border officials intercepted a homing pigeon carrying 200 ecstasy pills [pictured] in a backpack, as it was flying over the border from neighbouring Iraq.

Read this next: “A clear head on a Sunday morning is a gift”: Why DJs & ravers are embracing sobriety

Randle said that in his 13 years working as a prison officer that he has not heard of a bird being used to smuggle drugs, suggesting that the success of officers’ work in preventing and intercepting drone packages was partly why.

He added: “They have gone backward in technology. Maybe that’s because of all the work we have done with drone interdiction that they are trying to find new ways to get contraband in without being detected.”

“The introduction of drugs into federal prisons is becoming a huge crisis,” he continued. “The whole goal of prisons is to rehabilitate and release people into society as law-abiding citizens, [so] introducing drugs is scary and especially a drug like crystal meth.”

Randle suggested that the drug smugglers behind the operation would have a hard time getting a pigeon to land in a precise location, especially when compared to a drone.