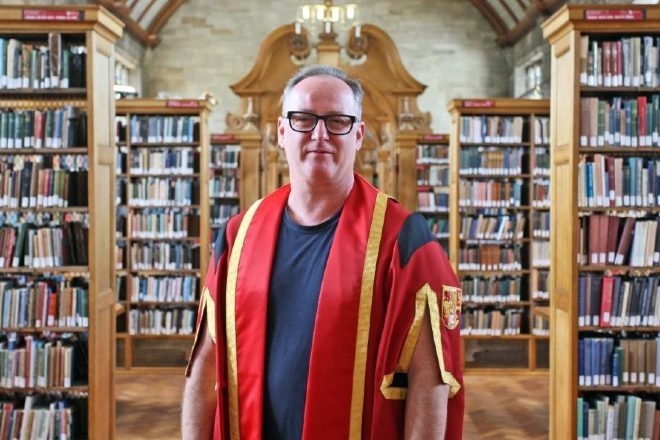 Bangor University has just awarded DJ Sasha with an honorary doctorate in music for his influence on the electronic music scene over the decades.

The Welsh DJ was born and raised in Bangor and had played his first gigs at the Bangor University Student’s Union.

He accepted his honorary degree last week (July 5) straight off the back of his performance at Glastonbury.

Read this next: Sasha & Digweed: Through the years

Sasha, real name Alexander Paul Coe, spent a lot of his youth in Bangor and spent much of his early career playing at Bangor University and in local venues around the Welsh town. He went back to Bangor University in November 2021 to play another gig at the Student Union.

His career took off in the 80s playing acid house inspired by nights spent at The Haçienda. He went on to become one of the most respected DJs in the game.

Outside of DJing, he has a vast catalogue of his own production work and has remixed for the likes of Madonna, The Chemical Brothers, and Hot Chip. He has also been nominated for a GRAMMY.

Read this next: The 10 best trance compilations from the golden age

Speaking about being an honorary degree recipient, Sasha says: “I didn’t expect to come back to Bangor University to be picking up a degree since it was the place where I did my very first gig in the Students’ Union and it’s taken me around the world!”

Adding to this, Professor Andrew Edwards, Vice-Chancellor of the University, said: “It gives me great pleasure to present a Bangor-born Sasha for this honour.

“Sasha has made an outstanding contribution to culture, language, music and the arts through his creative work. An honorary degree of Doctor of Music is well-deserved.”

An honorary degree acts in a similar way to an award, which is given to notable influential people by institutions.

The usual academic requirement for the degree, such as undertaking a course and passing exams, does not apply - and the degree is instead focused on a person’s influence in a field.

Sasha was one of a few notable public figures who have been given honorary degrees from Bangor University - others include mental health campaigner Ruby Wax and animal scientist Steve Backshall.

Elsewhere in the music world, Stormzy has recently received an honorary degree from The University of Exeter and Taylor Swift was given an honorary doctorate from New York University.

In July 2021 Sasha gifted the Mixmag office with a raucous techno and breaks set at The Lab LDN. Check out his set below.