Following months of speculation, global festival behemoth DGTL has just confirmed that the festival will run alongside ADE 2021 this year and really added to the moment by releasing the full line-up. Spread out over four events and three days, highlights include headlining sets from Disclosure, The Blessed Madonna, Kölsch, KiNK Live, Sven Väth, Dixon, Paula Temple, Honey Dijon, Jon Hopkins, Dax J as well as a bunch of really amazing local Dutch talent. For the first time in the brand’s history, DGTL will also host a daytime event on Saturday. See the full line-up below. 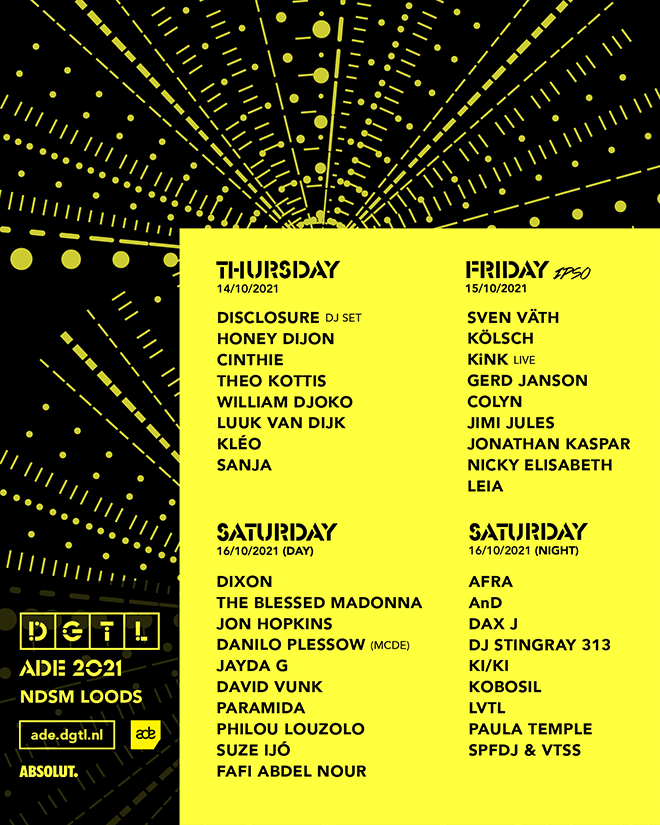 Since 2013 DGTL has run a sustainability program and ahead of last year’s cancelled event, the festival had just announced that they had taken a crucial step to becoming 100% sustainable by creating a circular blueprint — artist travel was the last obstacle. It remains to be seen what plans the festival has in store in this department but with an extra year to beef up sustainability initiaves, we’re looking forward to seeing what innovations they have come with up.

20,000 music fans are expected to flock to the festival’s traditional home at the NDSM Docklands in the heart of Amsterdam, to once more come together under the bass and reaffirm their passion for electronic music. Of course, there’s a risk that things might not move forward but with the situation fast improving, vaccines being rolled out and pilot event taking place all over Europe, we’re more hopeful than ever that in five months we’ll all be reunited at ADE.

Fans can register now for early access to DGTL ADE 2021 tickets which are already on sale to the general public here.