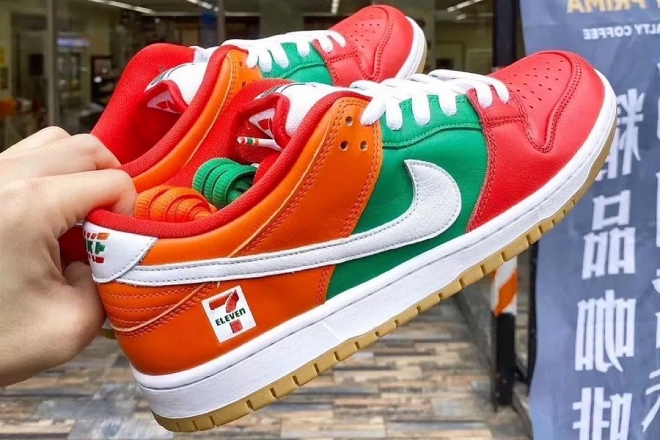 Yep, it's official. Since 2020, Nike SB series has gone experimental by teaming up with unexpected partners like Ben & Jerry's and Travis Scott, but this newest collaboration is probably the most unforeseeable one — Nike SB Dunk Low has crossed over with Asia's beloved convenience store 7-Eleven.

The 7-Eleven SB Dunk went viral on social media yesterday with pictures depicting a shoe with shoe decorated with the convenience store’s iconic three-tone signature colors — orange on the heel, green on the quarter panel and red at the tip. The style is finished with 7-Eleven’s logo embroidered in full color on the heel. The look is surprisingly clean, eye-catching, and edgy. Nike has not yet announced the official release date but here are some of the first looks:

This photo is from Taiwan 7-11

Somebody saying those 7-Eleven are fake. Nope.

The western world might not be on board with this combo like we are in the Far East, since 7-Eleven is almost lauded as a cultural icon in Asia thanks to its per capita population. There are over 20,000 7-Elevens in Japan alone, making up nearly 31% of the brand's global stores. In Taiwan, it operates around 5,000, which is 50% of the country's total number of convenience stores on an island that is only 395 kilometres from top to bottom. In Thailand, there are another 8,000, and in Hong Kong and Macau, you can find 900 stores scattered across the small city, with at least one shop every kilometre. With this in mind, the collaboration is hugely significant for Asians who have grown up around these stores.